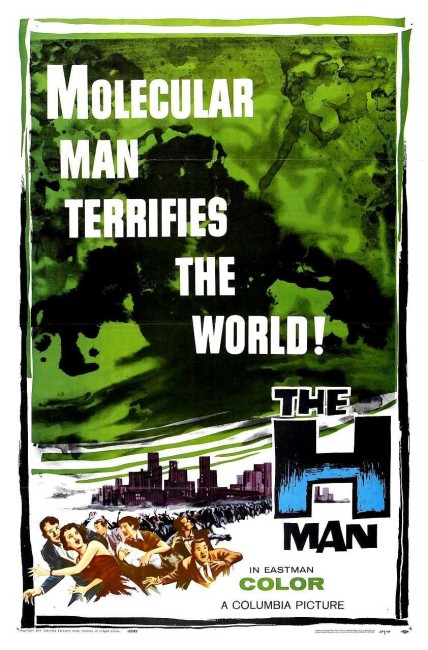 Tokyo police are puzzled after the drug dealer Misaki mysteriously disappears in the street, leaving behind only empty clothing. They focus on Misaki’s girlfriend, nightclub singer Chikako Arai, believing that she knows his whereabouts, although she proclaims innocence about his doings. As others disappear in similar circumstances, leaving behind only their clothes, the police receive a visit from the scientist Masada who claims that radiation is causing people to dissolve. He takes them to meet the surviving crew of the ship Ryujinmaru who tell how they boarded an abandoned fishing vessel where they were attacked by a blob-like form that dissolved any human being it touched. Masada believes that the blob was created by proximity to atomic bomb tests. As the police ridicule these suggestions, the H-Man, as it is called, emerges into the streets of Tokyo and begins dissolving people.

Toho Films and director Ishiro Honda emerged in the 1950s with the hit of the Japanese monster movie Godzilla, King of the Monsters (1956). The success of Godzilla spun off an industry. For several years after, Toho and Ishiro Honda experimented with other forms of monster movies and fantastical sub-genres, including their own variants on the alien invasion film – The Mysterians (1957) – and the space opera – Battle in Outer Space (1961), which both in turn inspired their own imitators.

The H-Man was one of a handful of mutation films that Toho made during this period. Others of these included the non-Honda directed Secret of the Telegian (1960) and from Honda Attack of the Mushroom People/Matango, The Fungus of Terror (1963) and The Human Vapor (1964), which were focused around colourful novelty effects and villains undergoing bizarre transformations.

At the point that they made The H-Man, Toho and Ishiro Honda were still experimenting with ideas. As per the opening stock footage shot, the shadow of the atomic bomb is again present, it hanging over much Japanese cinema of this period. The H-Man came out the same year as The Blob (1958) but a few months earlier otherwise I would have said that it was a Japanese attempt to copy the American film.

For the first thirty minutes, The H-Man does not even seem as though it is a monster movie – it seems more like a Japanese attempt to copy a hard-boiled American crime drama. This is not particularly well written – it is exceedingly difficult to follow some of the logic that the police investigation follows – you are not even sure why they are investigating the nightclub and how this ties to the ghost ship at sea and the H-Man causing the disappearance of people. Nor, beyond her boyfriend being one of the victims, is it clear why singer Yumi Shirakawa is involved in everything or why the H-Man invades the nightclub at one point.

The problem with the story is that the H-Man lacks a personality – it is suggested that it is intelligent but there is no indication of any personality or even that it used to be human. Thus its’ actions in coming after the nightclub singer seem oddly unmotivated. Ishiro Honda was never a people director and when his films focused on human scenes, these tended to the stolid – the attempts to add a car chase here, which all takes place under the speed limit, are woefully banal.

The film perks up with the sporadic appearances of the H-Man. There is an eeriness to its appearances, particularly the initial scenes aboard the darkened ship where it manifests as a glowing transparent green shape advancing on people and with bodies half-seen collapsing into piles of empty clothes. The film is less effective when Ishiro Honda and his effects department rely on animation to show the blob – particularly a shot of a bikinied dancer being devoured where the H-Man is simply represented by a crude animated shape covering her. Even so the routine crime drama policier dominates the show and the appearances of the H-Man are infrequent – such that we are constantly sitting waiting through the dull drama for the effects sequences to come and perk the show up.