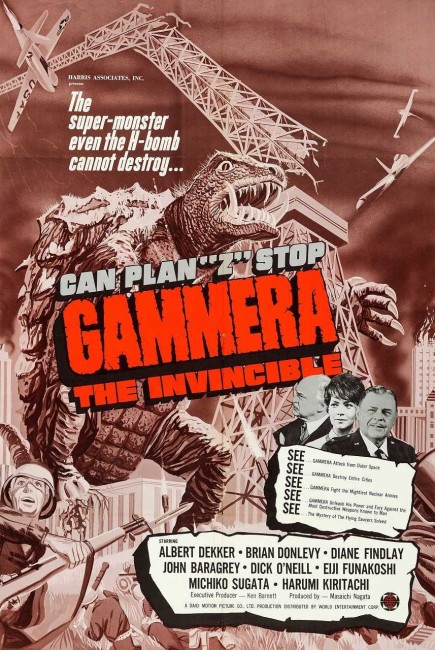 A fighter plane crashes in the Arctic, causing an atomic explosion that unearths a giant turtle. The Eskimo natives recognise the giant turtle as the legendary monster known as Gammera. Gammera takes to the air, flying around the world and eventually settling in Japan. Wherever it goes, it causes mass devastation with its giant size and fiery breath. The military realise that Gammera has a vulnerability to cold and seek to find a way to exploit this weakness. Young Toshio falls from a lighthouse that is demolished during the mass destruction but is saved by Gammera. Yoshio then struggles to save Gammera from destruction by the military.

Japan’s Toho studio had immense success with their atomic monster movie Godzilla, King of the Monsters (1954), which has produced 27 sequels to date. Seeing the success that Toho was having with Godzilla (and others monsters movies), rival studio Daiei quickly came up with Gammera the Invincible. Gammera too proved popular – although not as popular as Godzilla – and has produced ten sequels to date. (See below for the other Gamera films).

Gammera the Invincible is clearly designed as a copy of Godzilla. It has the same basic plot of a monster unleashed by an atomic explosion and going on a rampage, causing mass destruction across Japan before being brought down by scientists who find a chink in its near-invulnerability. Gammera even has the same kind of high-pitched howl that Godzilla does, as well as radioactive breath. In terms of inspiration, Gammera the Invincible goes back even further to the film that inspired Godzilla – The Beast from 20,000 Fathoms (1953) – and borrows from Beast the origin of the monster revived by an atomic explosion in the Arctic.

The special effects in Gammera are somewhat variable, with some of the model ships, planes and trains looking exactly like models. There are however some excellent mass destruction sequences, particularly the sequences with Gammera destroying the geothermal station and rampaging through Tokyo. Here it looks as though the filmmakers have actually gone out and destroyed real railway carriages. In fact, these sequences contain better effects than the ones that appear in the original Godzilla. The Gammera monster does look moderately fearsome, despite being mostly immobile. Gammera also manages a much better ending than the original Godzilla, where the monster here is trapped at a rocket launch platform, lured into a capsule and then launched into space.

By the mid 1960s, Godzilla had been transformed from a rampaging monster to become Japan’s defender. By the end of the 1960s, the Godzilla films had become a children’s series with nauseous kids frequently being thrown into the mix. The same happened with the Gamera series – although Gammera is portrayed as a monster here, you can see the beginnings of the juvenile elements that would quickly dominate the series, with the addition of a young boy that Gammera saves from a fall from a lighthouse and spends the rest of the film naively trying to save his friend. There is also a bizarre Gammera theme song that turns up during a sequence where a Tokyo nightclub is destroyed.

The 1966 US release of the film was entitled Gammera the Invincible, adding one ‘m’ to Gamera’s name over the Japanese title. (All the subsequent English-language releases revert to type and spell Gamera with one m). The American version, seen here, followed what was the case with numerous Japanese monster movies of the era of US producers filming new material for English-language audiences.

This new footage alters the film to make it appear as though the Gammera threat was international and that it is the US military that coordinate the efforts to destroy the creature. The credits pump up the American content, although, unlike some other Japanese monster moves that were released in America, Gammera the Invincible does at least credit the original Japanese creative personnel. On the minus side, Gammera is somewhat slow and the statically directed American scenes only serve to make it seem even talkier. Brian Donlevy appears as the general in charge of operations but gives a stiff and awkward performance.

The other Gamera films are:– Gamera vs Barugon/War of the Monsters (1966), Gamera vs Gyaos/Return of the Giant Monsters (1967), Destroy All Planets (1968), Attack of the Monsters/Gamera vs Guiron (1969), Gamera vs Jiger/Gamera vs Monster X/Monsters Invade Expo 70 (1970) and Gamera vs Zigra (1971). The Gamera series was discontinued after Daiei declared bankruptcy in the early 1970s. Gamera: Super Monster (1980) was a revival but this was a film mostly based around stock footage rehashed from the other films. The series was continued in the 1990s, being revived by director Shusuke Kaneko with some excellent special effects in Gamera, The Guardian of the Universe (1995), Gamera 2: Assault of Legion (1996) and Gamera 3: Revenge of Iris (1999), with very impressive results, as well as the subsequent Gamera the Brave (2006).