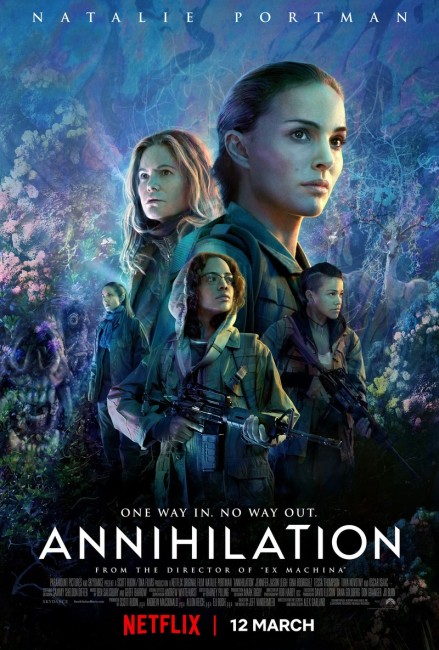 Lena is held at a government facility where she is being examined by scientists. She was a biology professor but was suffering loss because her husband Kane, a soldier, had been missing for over a year after departing on a classified mission. He then suddenly reappeared to her but seemed blank and withdrawn, before collapsing. As she rushed him to hospital, the ambulance was surrounded by government vehicles and both of them taken into custody. There Lena met Dr Ventress who revealed they had been taken to a secret facility on the southern US coast. Three years earlier, a meteorite had struck near a lighthouse, creating a slowly expanding area of altered terrain that has been nicknamed the Shimmer Zone. Kane was one of several teams that were sent in to investigate, all of whom have failed to return before this. In an effort to find answers, Lena volunteered for an all-woman expedition led by Ventress. They departed, heading into the Shimmer Zone, finding a world where the alien presence has created a series of impossible mutations.

Annihilation was the second directorial outing from Alex Garland. Garland first appeared as a novelist with The Beach (1996) – plus a couple of other books – and this was adapted into the Danny Boyle film The Beach (2000) with script by Garland. Garland and Boyle then collaborated on the hit zombie film 28 Days Later (2002), followed by the science-fiction film Sunshine (2007). This seemed to set Garland on a career as a science-fiction screenwriter and he subsequently wrote Never Let Me Go (2010), the adaptation of Dredd (2012) and has been prominently associated with the scripts for the stalled adaptation of the Halo videogame and remake of Logan’s Run (1976). Garland made his writing/directing debut with the excellent artificial intelligence film Ex Machina (2015), which won acclaim around the world, including having him nominated for a Best Original Screenplay at the Academy Awards.

Annihilation emerges as the Big High Concept Movie of 2018. It comes from a 2014 novel by US author science-fiction Jeff VanderMeer. VanderMeer followed it with two book sequels Authority (2014) and Acceptance (2014). Annihilation was a long time in pre-production during which its reputation built. It however emerged to a mixed response – following initial test screenings, both Garland and producer Scott Rudin fought efforts by the distributor to change the downbeat ending. The film received a divided reception from audiences, vying between those that celebrated it for its conceptual reach and others that called a disappointment.

I have always been fascinated with this type of film – one where people enter into a borderland zone where the rules of the normal world no longer apply – ever since I saw Andrei Tarkovsky’s Stalker (1979) at a young age, wherein a trio of men set out into a closed-off alien zone where the rules of normal physics no longer apply. I have always had a love of films that approach that same territory – efforts like Cube (1997), the Beyond episode of The Animatrix (2003), The Lost Room (2006), Monsters (2010), YellowBrickRoad (2010), Radius (2017) and arguably tv’s Lost (2004-10). Indeed, you could say that the spirit of Andrei Tarkovsky hangs over Annihilation. Alex Garland creates the Shimmer Zone with a budget that Tarkovsky must only have dreamed of having. Equally the theme that comes to dominate in the latter half of doppelgangers created by the alien presence very much echoes the themes that ran throughout Tarkovsky’s earlier Solaris (1972) of an alien intelligence creating doubles out of people’s memories in an attempt to make contact with humanity.

Garland creates a great deal of fascination in the build-up. The initial return of Oscar Isaac – his blankness and unfamiliarity and the rather chill line where he talks about seeing himself at the door and says of Natalie Portman “I remembered you” as though she was no more than a memory – starts things off in a fascinating way. The journey into the Shimmer Zone takes place with a great deal of intrigue – the party awakening after their first night to find they have been there for several days but with no memory of doing so. The strange, scientifically impossible biological mutations – including the video footage of Oscar Isaac opening up a man’s stomach to reveal a large snake-like thing moving in there; or the group finding an empty pool inside the complex where it looks like the same man has exploded into multi-coloured fungus.

Alex Garland creates a genuinely alien atmosphere – of the party coming across the remains of a settlement where human-like figures made of flowers stand frozen like sculptures in a field, or Natalie Portman’s journey to the lighthouse across a landscape of crystalline trees. The most outlandish moment in the film is the one where the group are tied up in a room and are attacked by a mutant bear with a quasi-human-like face that cries “help me.”

The pace of the film is on the slow side – although this is nothing compared to Stalker where Tarkovsky would let characters sit in silence for minutes at a time. You have a fascination with wanting to know what the party are going to encounter at their destination. This reaches a fascinatingly weird ending where [PLOT SPOILERS] Natalie Portman reaches the lighthouse to find the video of Oscar Isaac having killed himself with a phosphorous grenade aided by what she realises is his doppelganger, only to then venture down into the tunnels beneath the lighthouse and emerge followed by an alien lifeform that mirrors everything she does.

The film reaches a downbeat and enigmatic ending that contradicts the book and its sequels (which Garland points out did not exist at the time he started writing the script). It is this ending that switched off many of the Annihilation detractors. It is certainly one where Garland subverts the build-up. You expect an epic meeting with the alien – perhaps akin to the climax of 2001: A Space Odyssey (1968) or Solaris – but what we get is more something akin to Invasion of the Body Snatchers (1956), one where the pod people are the protagonists (perhaps). It feels very similar to the climax of Ex Machina – both Ex Machina and Annihilation feature regular protagonists venturing into an area to meet with non-human entities that mimic the human form and an ending in which we see that the non-human entities have turned our expectation of them on their heads. It’s an ending that is muted and not fully satisfying in terms of where your expectations build the film up to going. That said, the rest of it is still a fascinating and beautifully made work.

Alex Garland next went on to write/direct the extraordinary tv mini-series Devs (2020).