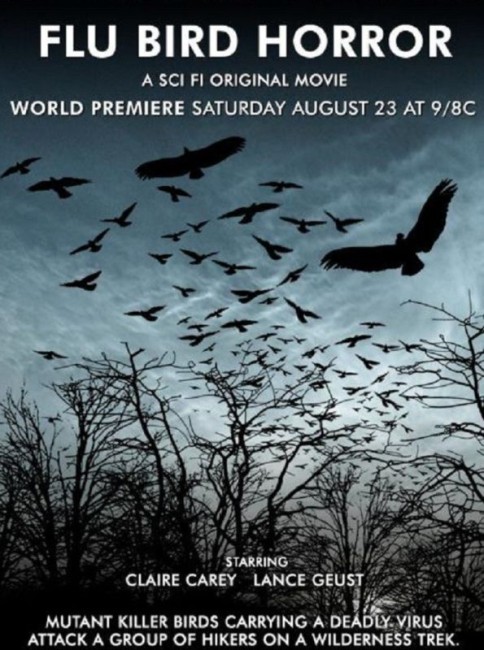 A counsellor takes a group of teenagers from juvenile hall on a confidence-building course in the woods. There they are suddenly attacked by a large, vicious bird. The gored counsellor is rushed to hospital by ranger Garret Cole. It is discovered that the counsellor’s body has become infected with a disease and Dr Jacqueline Hyde, Garrett’s old flame, realises that they are dealing with a deadly, mutated form of the H5N1 Bird Flu virus. Meanwhile, the other teenagers flee through the forest pursued by mutant birds. One of the teens, Johnson, takes charge of the group but ruthlessly demands they abandon one of the infected so that they can get away. Homeland Security arrives and quarantines off the hospital. Garret and Jacqueline force their way out of the cordon and head to the rescue of the teenagers as they try to fend off the mutant birds.

You have to give Nu Image full credit for exploiting a topical issue – in this case, jumping aboard the Bird Flu Virus scare that swept the world in 2002. (Flu Bird Horror came along just a little too early to jump aboard the Swine Flu Pandemic that swept the world in 2009 in which case we would no doubt have a film about a horde of mutant pigs). In actuality, the Bird Flu Virus is of little actual importance to the film – it is merely a topical scare on which to shoehorn a standard CGI monster movie.

There are a few scenes set in a hospital as it is cordoned off by Homeland Security (who in actuality is a US governmental division set up to deal with internal terrorist threats as opposed to the CDC who deal with contagious outbreaks). In fact, the film could easily have worked just as it is without any mention of the bird flu. Notedly, in the real world, the avian influenza (or bird flu) epidemic is a virus infectious to humans that is carried by regular birds, whereas for the film this becomes a stepping off point into complete fancy where the birds become vicious mutants that physically attack humans.

The film tosses up some passably cheap looking digital effects of mutant birds (that look more like pterodactyls). The film is quite gory and there is certainly some convincing makeup effects as people are attacked. The one plus of the film is some well developed characterisations among the group of teenagers stranded in the wilds who come with better developed tensions and edges than you usually get in films such as these.

The cast are the usual bunch of unknowns, although Sarah Butler did go on to become the lead in the subsequent remake of I Spit on Your Grave (2010) and emerges as the most capably in charge among the group of teens. The one other recognisable name is Lance Guest, a minor teenage name in the 1980s in films such as The Last Starfighter (1984), Jaws: The Revenge (1987) and not much else. Somewhat amusing is the fact that most of the supporting cast are English-speaking actors from Romania (which Ni Image frequently uses as a cut-price location), resulting in such oddities as the heavies from Homeland Security all speaking with East European accents.