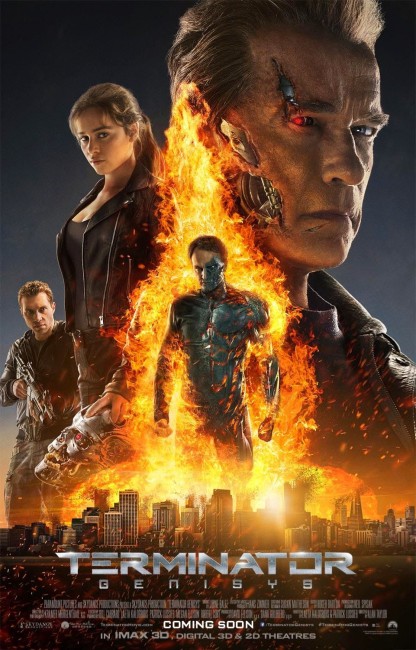 In the year 2029, John Connor leads the final assault back against Skynet and the machines. They break through into a hangar in the ruins of L.A. to find the machines’ ultimate weapon – a time travel device. Realising that the machines have sent a Terminator back to the year 1984 to eliminate his mother, John asks for volunteers to go back and stop it. His best friend Kyle Reese steps forward. However, when The Terminator arrives back in 1984, another aging Terminator is waiting to eliminate it. Kyle arrives in 1984 just as a T-1000 tries to eliminate him but is saved by Sarah Connor and the aging Terminator. She refers to The Terminator as Pops and says it has been her guardian ever since it saved her as a child. As they avoid pursuit by the T-1000, Kyle learns that the timeline he was expecting to arrive in has been radically altered. They set out to try and get things back on course by travelling forward in time to the year 2017 and preventing Skynet from going online in the form of the massive technology synching project known as Genisys. What they have not counted on is the machines sending back John who has now been transformed into a human-machine hybrid.

The Terminator (1984) is a landmark film. Even aside from the fact that it introduced James Cameron to the world, it was a defining action film for the 1980s. Its theme of the invincible killer machine was endlessly imitated, while it also inspired a spate of time travel/action films. Cameron followed this up with Terminator 2: Judgement Day (1991), one of the most amazing action films ever made. The important distinction that Terminator 2 holds is that it was the film that sparked off the CGI revolution. The more dubious quality it offered is that it transformed the action film into something that exists in terms of ever-escalating spectacle.

Thereafter the Terminator franchise starts to get a little ropey. After Cameron departed, the copyright to the series has passed through various hands with considerably lesser films being churned out – Terminator 3: Rise of the Machines (2003) and Terminator Salvation (2009), as well as the halfway okay tv series Terminator: The Sarah Connor Chronicles (2008-9) – that only weakly look back and homage what Cameron conducted while failing to deliver anything that came anywhere near the first two films in imagination.

Though it was touted as the start of a new series, Terminator Salvation was box-office disappointment. Terminator Genisys emerged after a bidding war for the rights to finally end in the hands of Megan Ellison and her Skydance production company. The film has been given to Alan Taylor, a prolific television director since the 1990s who made a couple of films with Palookaville (1995) and Kill the Poor (2003) but did not emerge into the major leagues until he took the helm of Thor: The Dark World (2013).

All that you end up doing is exiting Terminator Genisys with the feeling of “what were they thinking.” It is hard to tell. You get the impression that much of the film was predicated on Arnold Schwarzenegger’s availability as an actor again after the end of his term as Governor of California. There seems an attempt to work with his advanced aged (67 years old), which is at least dealt with in a clever rationalisation.

There also seems the idea of making a sequel but not-quite-reboot by taking a leaf from Star Trek (2009) and creating an alternate timeline where events play out similarly but not the same. Genisys seems to set out to tell a story around the sidelines of The Terminator with time travellers intersecting with prior events, not unakin to Back to the Future Part II (1989). The possibilities seem intriguing but this is soon abandoned and Terminator Genisys just becomes a regular chase film.

The script wants to cherry-pick elements from the rest of the series – a return of the T-1000, the same relationship between Sarah Connor and a Terminator that is coming to understand humanity, the same highly militarised efforts to stop Skynet going live from Terminator 2, the police station breakout and Sarah-Kyle relationship from The Terminator. The film rehashes lines from the rest of the series – “Come with me if you want to live” this time uttered by Sarah, “Give me your hand”, “I’ll be back” and a rewrite of Sarah’s end narration from Terminator 2 – in a way that is starting to seem like self-parody.

The problem with Terminator Genisys is that it feels like a box-office juggernaut slung together to try and do things – a soft reboot, the reintroduction of an aging Arnold Schwarzenegger and a rehash of many of the familiar plot elements – resulting in something that makes no real sense on a narrative level. Things happen, a lot of things get blown up very spectacularly but it frequently feels like these are the only thing carrying the narrative forward. There are spins on the familiar – an aging Terminator, old vs young Terminators, John Connor turned into a machine – but there is no sense that they mean anything other than the film trying to serve up a twist on what audiences have come to expect.

The greatest problem is that nothing in the competing hodgepodge of elements makes any sense. The idea of alternate timeline is intriguing but we are never given any explanation of what caused it to occur in the first place thus the whole film exists in a conceptual vacuum that you feel a proper science-fiction writer would have solved in five minutes flat. The idea of a Terminator sent back to when Sarah Connor was a child is an intriguing one but we are never given any explanation of who sent it or why, and moreover how this precipitates a series of actions that would so radically disrupt the existing timeline.

How come Kyle Reese has two opposing memories of alternate timelines? How does Skynet, which is just coming online in 2017, manage to have knowledge of who people are and their significance when all of these are things that happen in its future? Why does the cyborgised John Connor come back to join in attempting to kill his mother as this would surely negate his own existence? There is a fantastic article at Entertainment Weekly that valiantly tries to rationally explain everything.

Alan Taylor serves up the action scenes with routinely spectacular regard. The effects revolution that was started by Terminator 2 is nearly twenty-five years on but there is not a single thing here that approaches anything that James Cameron delivered in that film in terms of wow factor. The film’s highlight is a spectacular sequence with a bus hanging on the side of the Golden Gate Bridge but this quickly fades in memory. The rest is just explosions, digital effects and gunplay that passes you by as empty eye candy.

Arnold Schwarzenegger eases back into his old role with effortless ease and gives the film its few moments of enlivening humour. All of the other familiar roles have been recast. The most notable of these is Emilia Clarke as Sarah Connor. Clarke came to fame as Daenerys Targaryen in tv’s Game of Thrones (2011-9) where she played with a commanding regality that made her an audience favourite. Here she is just cast as a regular present-day girl and comes across as demure, even on the quiet side. This would be fine if Clarke was playing the same role that Linda Hamilton did in The Terminator. The unfortunate thing is that Genisys wants to give us the hard-bitten, gun toting Sarah Connor from Terminator 2 but Clarke’s quietness (not to mention her 5’2″ build) causes her to physically disappear inside the role.

Jai Courtney’s Kyle just seems boyishly handsome, hardly the seasoned soldier that Michael Biehn played. Moreover, the relationship between he and Sarah Connor has been reconceived as a modern action movie comedic sparring-come-grudging attraction that you can hardly take seriously. Jason Clarke has gained attention in a number of roles of recent – but his role here is no more than a cardboard cutout.

This was followed by Terminator: Dark Fate (2019) with return appearances from Arnold Schwarzenegger and Linda Hamilton.