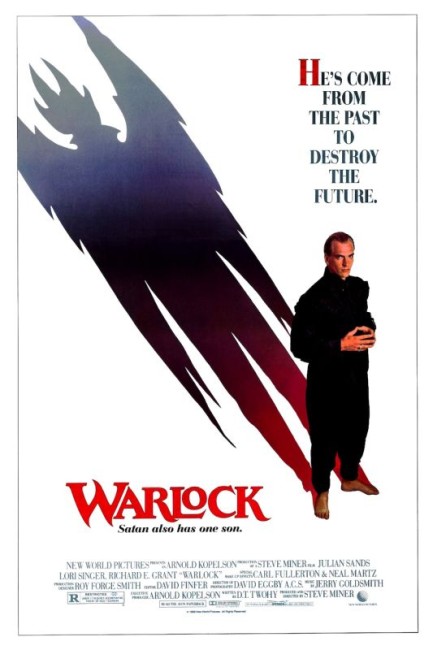 Boston, 1691. A warlock has been captured and is imprisoned awaiting trial. His rival, the witchfinder Giles Redferne, goes to give him the chance to repent. Instead, the warlock calls up demonic forces, which open up a vortex for him to escape. Redferne jumps in after the warlock and they travel through time to the present-day, 1988. The warlock appears in the apartment of modern girl Kassandra, leaving her inflicted with a curse that causes her to age forty years every day. The warlock then learns that he can become the son of the Devil if he reunites the three parts of the Satanic Bible, which have been separated and hidden across the country. Redferne, joined by a rapidly aging Kassandra, heads after the warlock, tracking him with his witchfinding implements. However, as they pursue the warlock, they find that he gains more power every time he reunites each part of the Satanic Bible.

Warlock – which should not be confused with the classic Richard Widmark Western Warlock (1959) – is a rather enjoyable horror film. If one could imagine Matthew Hopkins – The Witchfinder General (1968) where Vincent Price’s Hopkins was played in a more sympathetic light combined with the time-flipping chase plot of The Terminator (1984) or perhaps the cross-temporal combat of Highlander (1986), one might have an idea of the preposterous fun that is Warlock.

Warlock was made by Steve Miner, a workmanlike director who had emerged as an assistant to Wes Craven and then produced Friday the 13th (1980), before making his directorial debut with Friday the 13th Part 2 (1981). Miner went onto make Friday the 13th Part III in 3D (1982) and House (1986) and subsequent to this genre efforts like the weepy Mel Gibson cryogenic sleeper awakes romance Forever Young (1992), Halloween H20: Twenty Years Later (1998), Lake Placid (1999) and Day of the Dead (2008). Indeed, Warlock is the single best film in Steve Miner’s otherwise unexceptional oeuvre.

Of course, the one name on the credits that made the difference was that of D.T. (also known as David) Twohy. Around the time, David Twohy was making his name as a scripter with production line films like Critters 2 (1988) and various action vehicles but would then go onto to make his name as one of the most promising genre director/writers of the 1990s and beyond with the likes of the travel film Timescape (1992), the alien invasion film The Arrival (1996), the superb Pitch Black (2000), the haunted submarine drama Below (2002), The Chronicles of Riddick (2004), the psycho-thriller A Perfect Getaway (2009) and Riddick (2013).

The fun that David Twohy brings to the script is in taking all the sour cream, hexes and hallowed ground nonsense of Middle Ages old wives’ tales, playing it with absolute conviction and weaving a perfectly serious mythology out of it. The scenes in the middle of the film with Julian Sands and Richard E. Grant locked in combat flying through the air, wielding bullwhips and sanctified fetlocks or Grant with copper pennies in his mouth for protection impaling Sands on weather vanes, and Lori Singer hammering nails into the warlock’s footprints makes a wonderful deadpan action format out of the nonsensical brew.

Richard E. Grant goes at it in a marvellously intent performance as though he believes every word of what he is saying. As the warlock, Julian Sands plays with his familiar hammy style of over-elocuted theatrics. Lori Singer, who seems to have modelled her performance on one of Melanie Griffith’s Kewpie doll parts, provides a certain hip humour. On the minus side, the film’s imagination is hampered by the mediocre flying effects and the unconvincing old age makeup on Lori Singer.

There were two sequels:– the silly Warlock: The Armageddon (1993), which featured a return performance from Julian Sands, and the marginally better Warlock: The End of Innocence (1999), where the title role was recast with Bruce Payne. Continuity between the sequels is ragged, with the nature of the warlock changing considerably in each film. The vampire film Tale of a Vampire (1992) was also retitled Warlock: Tale of a Vampire to capitalise on Julian Sands presence, although is unrelated to the other films.