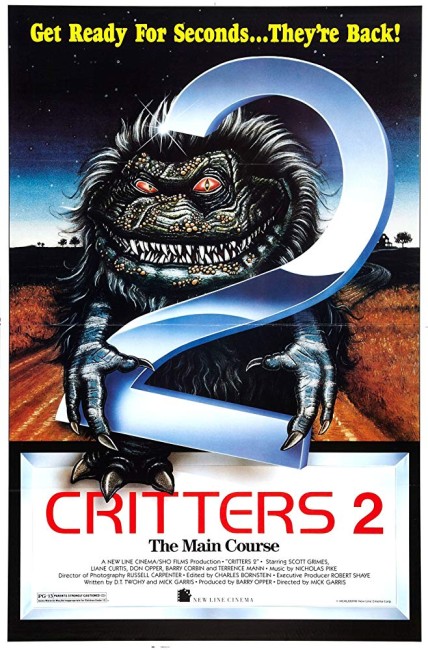 The polymorphic intergalactic bounty hunters Ug and Lee are sent back to Earth because the Krite infestation has not been wiped out. Bradley Brown returns to Grover’s Bend to visit his grandmother just as the Krite eggs start to hatch. People are leery of Bradley due to the trouble caused by the first Krite outbreak and ignore his warnings as the Krites start to attack anew.

The original Critters (1986) was an entertaining ripoff of Gremlins (1984) but thereafter the Critters series became yet another conveyor belt film franchise. Critters 2, sometimes referred to as Critters 2: The Main Course (but only on the film’s poster/video cover), was the first of several sequels. It was followed by Critters 3 (1991) and Critters 4 (1992). The series was later revived with Critters Attack! (2019).

Critters 2 was the directorial of Mick Garris, previously the script editor on Spielberg’s Amazing Stories (1985-6). Garris would go onto make a series of astonishingly ham-fisted and awful adaptations of Stephen King works. (See below for Garris’s other films). On the plus side, Critters 2 is co-written by David Twohy, who would go onto become one of the most intelligent genre directors of the 1990s and beyond with the likes of Timescape/The Grand Tour (1992), The Arrival (1996) and Pitch Black (2000).

Critters 2 comes with a hardly serious approach. Not that this need be a liability, however Mick Garris sketches everything in broad strokes that overbalance into clumsy farce – images like the sheriff hopping about in a an Easter Bunny costume; or the critters themselves, which come accompanied by hip subtitles like “Bitchin'” and stupid cartoon sound effects as they bang into walls. Garris pitches the humour down to the lowest common denominator.

Most of the time, Garris gives the impression that is hoping to get by by including in-jokes that show he too is part of the same fan crowd that read Famous Monsters of Filmland (1958-82) – there is an alien modelled after the Zanti in The Outer Limits (1963-5), as well as lame throwaway references to Ghostbusters (1984) and The Brain from Planet Arous (1957). In one of its more amusing gags, the film shows one of the shapechanging bounty hunters in danger of turning into the Freddy Krueger it sees on a poster – although the gag seems less funny when one realizes that both the Critters and Elm Street franchises are owned by the same company, New Line Cinema.

The Critters series is imitative of Gremlins in its setting of a picture postcard small town where the creatures have been inserted to anarchically disrupt its placidity. (The Hungry Heifer sequence here is very reminiscent of the scene where the Gremlins take over a bar in Gremlins). Unlike Gremlins, the small town here is presented without any hint of self-parody – its cloying simple-minded tones, the cuteness of the romance and woolly-headed sentiment are exactly what they appear to be and the result often verges on the sickeningly twee. Worse, the film never cares about whether its emotions are honest. At the climax, Don Opper’s bounty hunter sacrifices himself – the only moment that provokes the slightest emotional response in the film – but Mick Garris then indifferently throws this away with a casual contrivance that allows Opper to survive.