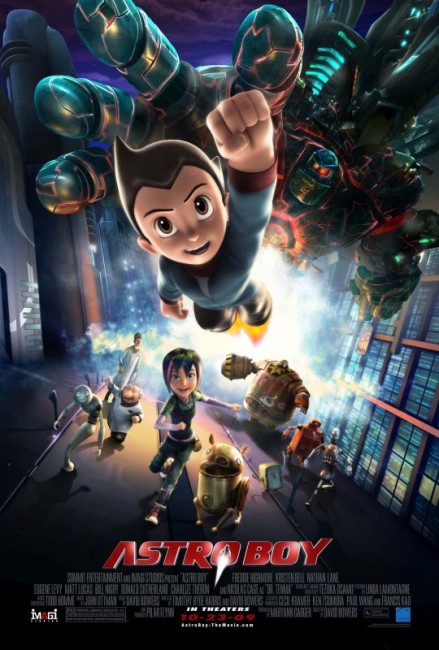 In the future, humanity lives in Metro City, floating above the abandoned surface of the Earth. The use of robots has now become so widespread that people regard them as disposable. Toby is the young son of Dr Tenma, the inventor of the robot. Toby contrives to sneak into his father’s demonstration of the new Peacemaker robot. There President Stone, who is seeking re-election with a campaign that plays on the threat of war with the surface, demands that the Blue Core Energy that powers the Peacemaker be replaced with dangerous Negative Red Energy. The Peacemaker starts to go amok before it is turned off and Toby is killed in the process. Distraught, Dr Tenma labours to build an exact android likeness of Toby’s body and programs it with Toby’s memories, before bringing it to life with the Blue Core Energy. As the android Toby soon starts to assert a desire to have fun, Dr Tenma becomes disappointed that what he has created no longer resembles his son. Toby discovers that he has amazing abilities, including rocket jets in his feet and enormous strength. However, his flying about draws the attention of President Stone and the military who seek to capture him. During this, Toby falls down to the surface, where he is found by the orphan kids and junked Metro City robots that live there. The kids give Toby the name Astro, although he is afraid to tell them that he is not human. He stands up to protect the robots that are made to fight each other in the arena for sport. He must then face President Stone who reactivates the Peacemaker using the Negative Red Energy, whereupon it promptly goes amok through Metro City, absorbing everything around it into its mass.

Astro Boy is one of the all time classic manga and anime. It was the creation of Osamu Tezuka, who is credited with devising the characteristic anime/manga style featuring pre-teen characters with oversized eyes. Osamu Tezuka’s oeuvre is legendary among manga fans, he also known for creating series like Kimba the White Lion and Black Jack, with Astro Boy probably being his most well known. For a time, Tezuka branched out as a director with Alakazam the Great (1961) and several other short films. There have also been a number of other films based on his works such as Space Firebird 2772 (1980), Unico (1981), Black Jack (1996), Jungle Emperor Leo (1997), Metropolis (2001), Dororo (2007) and M.W. (2008).

The original manga began in 1951 under the title Tetsuwan Atomu (which translates as The Mighty Atom) and ran in various serialized stories until 1968. This was then adapted into an anime tv series that ran from 1963-6. When the series was dubbed into English by NBC it was given the name Astro Boy and this was something that stuck in subsequent Japanese versions. The manga and anime recount the story of the android Astro Boy which Dr Tenma creates as a replacement for his son but then rejects him. Subsequently, Professor Ochanomizu/Dr Elefun adopts Astro Boy and creates an android family for him. The various adventures of Astro Boy mostly involve his acting as a superhero to defend Earth against various menaces. The anime series was later revived for 52 episodes as The New Astro Boy (1980-1) and for 50 episodes as Astro Boy (2003-4). There have been a handful of supposed Astro Boy films over the years but these have all been compilations of episodes from the tv series, and this is the first Astro Boy film made specifically for the big screen.

This new Astro Boy film comes from the Hong Kong-based Imagi Animation studio. Imagi Animation have been active in the last couple of years and were previously employed under Yoshiaki Kawajiri to make the anime Highlander: The Search for Vengeance (2007) and then revived the Teenage Mutant Ninja Turtles phenomenon with TNMT (2007). The director employed for the task is Dave Bowers, previously best known as the co-director of Aardman’s Flushed Away (2006) and who subsequently moved into live-action with Diary of a Wimpy Kid: Rodrick Rules (2011), Diary of a Wimpy Kid: Dog Days (2012) and Diary of a Wimpy Kid: The Long Haul (2017).

The film makes a number of changes to the manga/anime storyline, which were of varying degrees of controversy to fans of the original. In the original, Dr Tenma rebuilds his son Toby/Tobio after Toby is killed in a car crash. Dr Tenma and his rejection of Astro Boy is played a lot more cruelly in the originals (although was softened in later versions of the anime) where he is sold into the circus of the cruel Hamegg. Here Dr Tenma’s rejection has been toned down (Astro Boy becomes abandoned due to an accident after conflict with the military), while Hamegg has been reconceived more as Fagan out of Oliver Twist (1838) who forces Astro Boy to become a competitor in a series of robot gladiatorial games a la A.I. (Artificial Intelligence) (2001) (indeed the story arc that Astro Boy undergoes about being built by a scientist as a replacement for his son, rejected and then wandering alone as he tries to find his way home is now remarkably similar to A.I.). The film follows the general arc of the original somewhat, although Dr Elefun’s role in minimized to being no more than Dr Tenma’s assistant.

On screen, Astro Boy seems both filled with beautiful technical flourishes and at others times simplistically naive. An admirable effort has been made by Imagi Animation – the characters seem sleekly airbrushed, the backgrounds quietly impressive. The CGI gives flawlessly lovely life to everything. Dave Bowers and the animation team have clear fun with the various action set-pieces – the exhilarating moments where Astro Boy learns to fly, the scenes with the military pursuing him through the skies of the city and trying to capture him with their green forcefield hands, the battles in the arena. In particular, the film gets itself together for a spectacular giant robot battle at the climax.

However, at the same time, you end up appreciating Astro Boy more for its airbrushed polish and gee-whiz showoffishness than you ultimately do its heart, which amounts to no more than a series of simplistic cues and second-hand ideas. Most of the plot is constructed from a series of cliche themes or borrowed from other films – plaintive abandoned orphans, evil military, machines portrayed as a minority group that need defending, good energy vs evil energy, the kid who is unable to tell his friends the truth because he is afraid of being rejected for being different.

There is a range of appealingly cute robot sidekicks that in a standard animated fantasy film would normally be played by animals – a robotic trashcan that acts like a dog, a Eugene Levy-voiced robot servant, a duo of robotic window-cleaning products and a trio of inept robot revolutionaries. One surprising thing to find in a children’s film like this is the character of The President who is wanting to find an excuse to start a war to boost his re-election success and has clearly intended as a caricature of George W. Bush, which is something that feels about three years too late in its timing to make any intended point.

Astro Boy certainly gets geek approval points for namedropping Asimov’s Three Laws of Robotics but on a wider sense it seems like a world that is naively constructed and with little thought put into it. People live in a floating city and are fearful of the surface world below, while robot labour is so commonplace that they are regarded as disposable. It is hard to believe that people would build a city to escape the surface and at no point do anything like observe what is going on down there to the extent of not even knowing that it is still inhabited (especially if someone is trying to start a war with the surface). Moreover, if the city regards the use of robots as casual and disposable (and that no recycling of parts goes on), then where is all the metal to make more robots being obtained from (given that nobody returns to the surface to mine anymore)? We even get logic holes like the surface world seemingly being inhabited solely by orphan children, which leads to the logical question – where are the parents that gave birth to them?