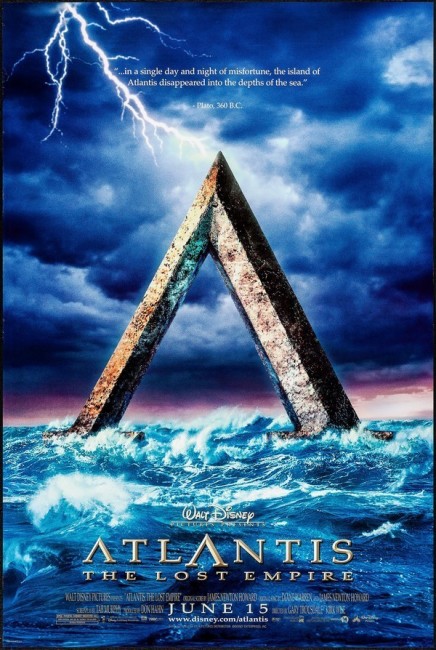 1914. Linguist Milo Thatch works as a boiler attendant in a Washington, D.C. museum where his theories about Atlantis being located off the coast of Iceland have him regarded as a crackpot by his superiors. He is then taken to a meeting with millionaire Preston Whitmore who knew Milo’s grandfather and offers to fund an expedition to find Atlantis in The Ulysses, a submarine that he has constructed. Whitmore’s crew set forth under Milo’s guidance. As they near their destination, they are attacked by a mechanical Leviathan and the submarine destroyed. The group journey on through a network of caverns and eventually come to the city of Atlantis, which is in a state of decay since being flooding by a giant wave centuries earlier. The only one able to understand the dead Atlantean language, Milo holds the key to understanding the ancient secrets that are lost to the modern Atlanteans. However, he must then protect the Atlanteans from the submarine commander Rourke and his mercenaries who are determined to rob the treasures of Atlantis.

Atlantis is a legend that has exuded a particular fascination in the public mind. All that we know of Atlantis originated in two works by Plato, Critias and Timias (circa 360 B.C.), in which Plato describes a vast and powerful empire that was drowned by a cataclysmic wave supposedly sent by Zeus because the Atlanteans had become slothful and greedy. From the descriptions given by Plato, various scholars have attempted to pinpoint an actual geographic location for Atlantis. Sources have ranged from The Azores, Bimini Island in the Bahamas, a sunken city near Portugal, Scandinavia, the mid-Atlantic shelf and Antarctica. The most interesting and probable theory is the Greek island of Santorini or Thera, a centre of early Minoan culture, which was destroyed in a vast volcanic eruption (the largest recorded in antiquity) around 1470 B.C. The Mediterranean basin is such that the shock waves from the detonation would have rebounded and caused tsunamis to flood the island.

Of course, Atlantis is always a place that has existed more in popular imagination than it ever has in reality, having gained particular life in the late 19th/early 20th Century in lost world fiction and as a source of ancient wisdom for the likes of Madame Blavatsky, Edgar Cayce and various New Age spiritualists. In the public imagination, it is seen as an idealised Grecian society, one that held lost secrets of advanced science or magic. What is interesting about all of this is that none of this is ever implied in Plato – yet outside of Plato there is no proof than any Atlantis ever existed. What many of the believers in Atlantis fail to understand is that Plato only wrote his works as political allegories – there is no indication that he expected his readers to ever gain the impression that he was describing a real place, any more so than say Jonathan Swift intended people to believe there were existing places known as Lilliput or Brobdingnag when he wrote Gulliver’s Travels (1726).

Atlantis: The Lost Empire is an animated feature from Disney. It comes from the directing team of Gary Trousdale and Kirk Wise who began the modern Disney animation renaissance with Beauty and the Beast (1991) and next made The Hunchback of Notre Dame (1996). Unlike some of the other current Disney directing teams – notably Ron Clement and John Musker, who made Aladdin (1992) and Hercules (1997) – Trousdale and Wise are the two among the current crop of the Disney directors who most self-consciously craft their films as art. Indeed, Atlantis: The Lost Empire seems a film pitched at a more adult level than most Disney films – there are no songs, no cute animal sidekicks and the film is thankfully free of the irritating need to throw in contemporary (and often irritatingly anachronistic) pop culture references that has dogged many recent Disney’s (the aforementioned Musker-Clements efforts being particularly guilty offenders).

Trousdale and Wise look back to classic Disney of yore for inspiration – in this case, the live-action 20,000 Leagues Under the Sea (1954) from which it borrows the retro-Victorian design scheme, serving up a wonderful array of drilling moles, hot-air balloons, period vehicles and a lavishly designed submarine (which is disposed of disappointingly early in the action). Less successful is the attempt to create crystalline and piscine themed Atlantean designs. The influence of Japanese anime has also crept in in one eerily beautiful set-piece where Kida is transformed into a being of pure light (the likes of which happen with almost cliched regularity in anime).

Although the problem here is that the film’s attempts to grasp at the transcendental falls into Disney feelgood cliches, which these days are far too New Age in nature. Thus Atlantis: The Lost Empire contains protests against environmental despoliation, the exploitation of other cultures, has a belief in the healing power of crystals, while the being of light is banally revealed to embody combined Atlantean ‘heart-magic’.

There are also some odd pieces where the script – co-written by no less than Buffy the Vampire Slayer creator Joss Whedon – has not done its research – a ‘root language’ is a language from which other languages have evolved, not something where a speaker can act as a universal translator. English, for example, evolved from Latin but a Latin speaker would be hard-pressed to recognise any words in today’s English.

Trousdale and Wise conduct some good action sequences with fighting leviathans and the climactic shootout between flying fish cycles and armed mercenaries. There is also a wonderfully engaging lineup of human supporting characters – including an endearingly tough tomboy mechanic; Jim Varney in his last performance as the cook; and a character with a Peter Lorre-modelled voice and a strange obsession with burrowing, although the show is fairly much stolen by Florence Stanley as the cynical radio operator. Trousdale and Wise create some impressively scaled journeys through caverns. There is one spectacular shot with where Milo and Kida ascend the tip of a pyramid and the animation does a 360-degree pan around the whole of the island.

Unfortunately, while Atlantis: The Lost Empire is one of the better of the modern Disney animated films (even if is not up there with one of the classic Disney epics), it was also one of the least successful. This was in part due to the fact that it opened the same week as Lara Croft, Tomb Raider (2001), whose runaway success totally eclipsed Atlantis. Indeed, the less-than-expected box-office returns of both Pearl Harbor (2001) and Atlantis: The Lost Empire within the space of a month forced the resignation of studio head Peter Schneider one week following Atlantis‘s premiere, while directors GaryTrousdale and Kirk Wise have not been employed since.