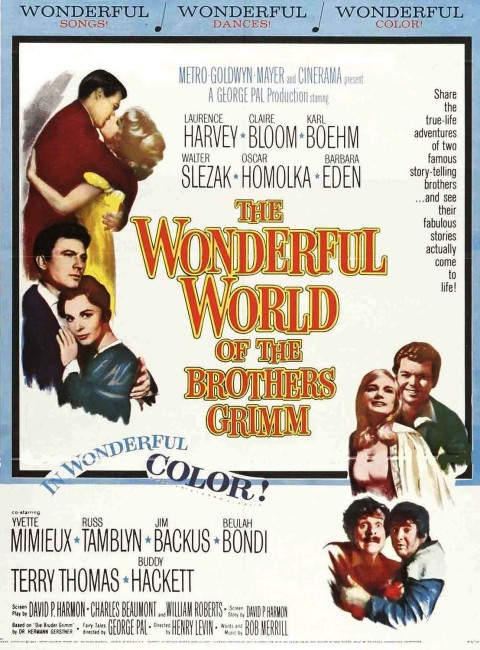 In Germany, the Grimm brothers Wilhelm and Jacob are at work compiling the family history of a self-important Duke. Wilhelm loves to collect fairy-tales and is constantly chasing after these to the point of irresponsibility. At the same time, the humourless Jacob finds Greta Heinrichs displaying romantic interest in him. Wilhelm tells several of his stories: The Dancing Princess:- A woodsman dreams of marrying the princess. Every suitor is asked how she managed to get sore feet – only they lose their heads if they get the answer wrong. Using a cape of invisibility, the woodsman follows the princess into the forest where he sees her dancing with the Gypsies. The Cobbler and the Elves:- As an overworked shoemaker sleeps on Christmas Eve, elves come out to help him complete his quota of orders. The Singing Bone:- The cowardly Sir Ludwig goes to face a dragon. However, the dragon is killed by Ludwig’s manservant Hans. Ludwig then kills Hans and claims that he slaughtered the dragon himself.

Producer George Pal is best known for his science-fiction films during the 1950s, which included the classic likes of Destination Moon (1950), When Worlds Collide (1951), The War of the Worlds (1953) and The Time Machine (1960). Less well known is George Pal’s earlier output during the 1940s of dozens of stop-motion animated shorts, which he called Puppetoons. Many of these were adapted from fairytales. Pal returned to his Puppetoons and expanded them out as a full-length feature film with tom thumb (1958). He later followed tom thumb up with the more lavishly scaled The Wonderful World of the Brothers Grimm.

The stories themselves are dull and the film feels overly long. When he directed, George Pal always pitched things down to an incredibly simplistic level and The Wonderful World of the Brothers Grimm never transcends the soft-headedness at its core. Of the three stories, The Cobbler and the Elves is forgettably slight. The Dancing Princess at least perks up during the Gypsy sequences where the dance sequences are conducted with a determined sensuality and energy. The best of the episodes is The Singing Bone – the stop-motion of the dragon is weak and the slapstick tone lowers the sequence but the fight between Terry-Thomas and the dragon is well choreographed and eventually allows the episode to win through to become the most well rounded of the stories.

However, when it comes to the wraparound story, Pal crucially never animates the Grimm Brothers as characters. Although the script is based on a non-fiction biography of the Grimms, we are shown little about them as people. We never understand their interest in fairytales – Laurence Harvey’s Wilhelm obsessively chases after stories from anybody he comes across, while Carl Boehm’s Jacob is merely anally retentive. That is the sum total of the two brothers’ characterisation. What the film fails to portray in any way is the fact the two brothers’ interest in fairy-tales was not some obsessive whim but came from a scholarly interest in Teutonic folklore.

George Pal created The Wonderful World of the Brothers Grimm as a Cinerama spectacle. It makes for mind boggling viewing today in even letterboxed video. It is filmed almost like a 3-D film, having things popped up and thrown at the audience. George Pal places the camera on top of or down at the wheel level of stagecoaches with the road rushing past on all sides of the screen, or sends it sweeping across the Bavarian landscapes with dizzying surround effect.