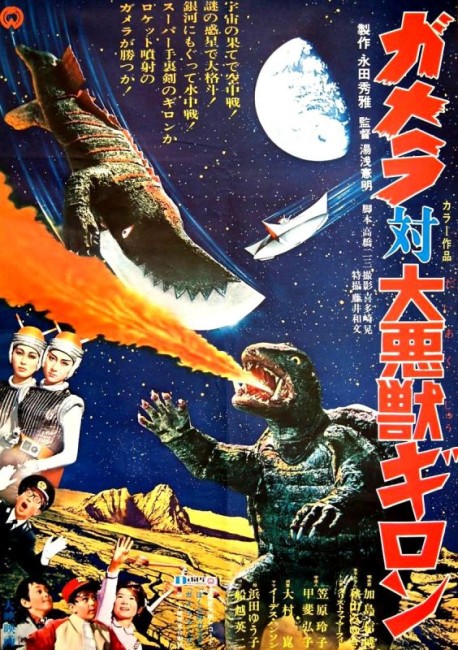 Two young boys, Akio and Tom, see a UFO come down and venture aboard, whereupon it takes off back into space. The UFO eventually lands on the planet Terra, which orbits on the opposite side of the sun from the Earth. The planet is ravaged by a Gyaos creature and the fearsome Guiron and is facing imminent destruction. There the boys meet the only two remaining Terran survivors Barbella and Flobella. The Terrans make the boys prisoner, intending to devour their brains and absorb their knowledge as a prelude to invading Earth. However, the boys’ salvation proves to be the giant monster Gamera, which is a friend to all children.

Attack of the Monsters was the fifth of the Gamera films. The Gamera series, which began with Gammera the Invincible (1965), was always a lesser, although not unpopular, attempt by Daiei Studios to copy rival studio Toho’s Godzilla series. The original Gamera series extended to eight films, although Gamera was revived again in the 1990s for several other films where Shusuke Kaneko’s entries in the series count amongst the best of all Japanese monster movies. (See below for the other Gamera titles).

During the 1960s and 1970s, the Gamera series followed very similar paths to the Godzilla series – the title creature was originally an atomically-revived monster that started out attacking Japan but in very quick time (the space of a single film) turned into a superheroic defender of Japan, taking on other invading monsters. Like the Godzilla series, the Gamera series quickly began to pander to the juvenile element and by the early 1970s both series had reached their nadir amid very poor special effects and indifferently written, juvenile plots. This is evidenced in Attack of the Monsters where Gamera is given two young children to rescue; while there is the frequently repeated phrase, “Gamera is the friend of children;” and a good deal of juvenile humour, especially the scenes with a simple-minded cop played by Kon Omura.

Attack of the Monsters at least comes from a period when the Gamera series had taken on a colourful silliness. (This was something that also infected many of the Godzilla entries from the same era). The planet Terra is depicted with a wonderfully pulpish colour like an alien world out of some of the better 1950s science-fiction films. The guest monsters are among two of the most absurd ever created on screen – Gyaos is like a giant flying bat with an axe-shaped head and a tail that looks as though it is taken from a 747; while Guiron looks like an ambulatory walking shark with a snout shaped like a meat cleaver.

The battle between the two of them is immensely entertaining – with Guiron chopping Gyaos’s leg off with his bladed nose and Gyaos bleeding in great purple-blooded chunks. The battles become even more lunatic once Gamera enters the scene – Guiron batters Gamera’s turtle shell with his bladed beak causing Gamera to splatter gouts of green blood; Gamera grabs Guiron in an airplane spin and throws him to impale him in a rock, nose first; Guiron fires deadly shuriken from his nose; Gamera tries to heal his wounds by piling ice against his epidermis; Gamera makes leaps about 100 feet into the air and comes down on Guiron’s back; Gamera grabs onto a strut that connects two towers and swings around and around it like a gymnast doing loops on the bar; and Gamera finally tosses a missile and impales it through Guiron’s shuriken missile nasal vent, blowing him up and causing his severed head to go flying up into the air.

The effects are about average for the era and somewhat uneven – the flying model of Gamera is immobile and has cartoonish eyes – but the sheer colour of the fight scenes makes up for this. Attack of the Monsters also borrows the name of the intergalactic heroine from the previous year’s tongue-in-cheek space opera Barbarella (1968), naming one of its female alien invaders Barbella.