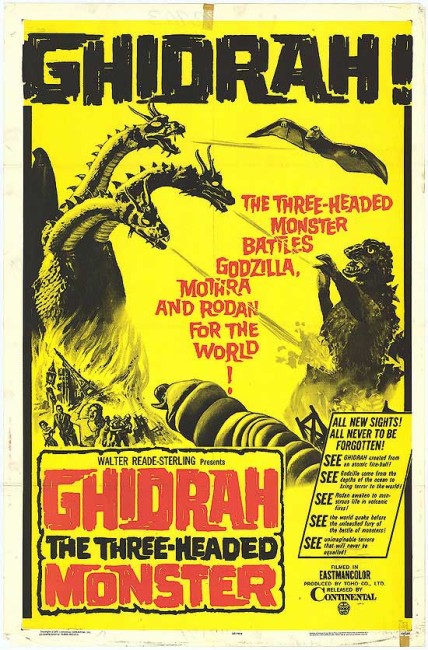 The detective Shindo is assigned to guard Princess Selina Salno of Sergina as she arrives in Japan. The princess is contacted aboard her flight by a light in the sky that tells her to get off the plane moments before it is blown up by a bomb. Next the princess turns up in Japan, speaking in public, claiming to be a Martian and warning people of great impending danger. Shindo, his journalist sister Naoka and assassins from Sergina all try to get to the princess. Meanwhile, Godzilla appears at sea, while Rodan is unearthed from a volcano and both begin rampaging across the country. A meteorite has also landed and hatches into a three-headed, fire-breathing monster. The princess warns that this is Ghidrah who destroyed the people of Mars three thousand years earlier. Earth’s only hope lies in the tiny twin Ailenia sisters persuading Mothra to come to Japan’s aid and Mothra then convincing Godzilla and Rodan to work together to defeat Ghidrah.

Ghidrah the Three-Headed Monster was the fifth Godzilla film. (See below for the other Godzilla films). The previous sequels – Gigantis the Fire Monster (1955), King Kong Vs. Godzilla (1962) and Godzilla vs the Thing (1964) – had each experimented with pitting Godzilla up against another monster. However, it was with Ghidrah the Three-Headed Monster that the concept of the Godzilla sequel began to become more focused – Ghidrah is the first film where Godzilla is a good guy rather than a baddie that the other monsters take on – there is even a scene where the monsters have a confab and persuade Godzilla to see reason.

Ghidrah was also the first Godzilla film to pit Godzilla against more than one monster, not unakin to the Universal monster bashes of the 1940s, something that became colourful and increasingly unserious tag-team wrestling matches in later series entries. Ghidrah also sees Toho and director Ishiro Honda experimenting in melding the kaiju eiga with elements of the Japanese space opera, which would later become a regular element of the Japanese monster movie – although here the alien invader elements are vague and it was the next entry Monster Zero/Invasion of the Astro Monster (1965) that would mount a more thematically full-fledged monster movie/space opera.

Ghidrah the Three-Headed Monster is also the best of the 1960s Godzilla sequels. The special effects team were operating at the best they ever did during this period. There are some excellent monster battles with Rodan picking up and dropping Godzilla, Godzilla batting at him with his tail, they body slamming one another and kicking rocks into each other’s faces. There is a genuine ferocity to these scenes too – this is well before the cartoonish silliness of Jun Fukuda’s entries in the 1970s where there was no longer anything serious about the monster battles. The all-out battle scenes when they arrive are simply marvellous. This is what the Godzilla film should be all about. Although, one slight disappointment about the film is that we only get to see Mothra’s larval children rather than the familiar full winged version.

Ghidrah the Three-Headed Monster is weakened by the usual poor English-language dubbing of Japanese monster movies of this era that sounds like it has been conducted by truck drivers. Plots and actors were never Ishiro Honda’s strong suit. Ghidrah has no clear story – it takes over 35 minutes before Godzilla even appears and things become tediously protracted with time having to be spent explaining how each of the featured monsters is revived. The film is also extremely vague when it comes to its space opera elements – though the film expends some time with the various parties pursuing the princess and her claim to be a Martian, there is no explanation offered of where the UFO that saved her from the bomb came from or how the princess subsequently came to think that she is a Martian.

Mothra originally appeared in Mothra (1962), while Rodan made its first appearance in Rodan the Flying Monster (1956). After making his screen debut here, Ghidrah (also known as Ghidorah) subsequently appeared in Monster Zero/Invasion of the Astro Monster (1965), Destroy All Monsters (1968) and Godzilla vs Gigan/Godzilla on Monster Island (1972). Ghidrah was later revived in the modern Japanese monster era for the conceptually amazing Godzilla vs King Ghidorah (1991) and then subsequently appeared in Godzilla and Mothra: The Battle for Earth (1992), Rebirth of Mothra (1996), Rebirth of Mothra III (1998), Godzilla Mothra and King Ghidorah: Giant Monsters All-Out Attack (2001) and Godzilla: Final Wars (2004). Ghidorah also appears in the US-made Godzilla, King of the Monsters (2019).