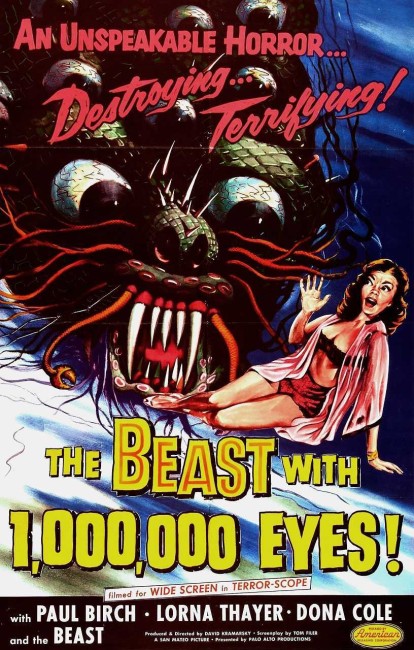 Allan Kelly maintains a farm in the desert along with his wife Carol and daughter Sandy. However, the farm has been failing for some time and this is producing tensions within their marriage. Now the animals around the property – birds, Sandy’s dog, a neighbour’s cow – begin to act threateningly and then attack them. The mute, intellectually handicapped handyman known only as Him also begins to act threateningly and tries to abduct Sandy. Allan realises that an alien brain has landed in the desert and is controlling the minds of the animals and Him.

The Beast with a Million Eyes is a minor science-fiction entry from the 1950s. It was made by Roger Corman’s short-lived San Mateo Productions company, where Corman also produced The Fast and the Furious (1954) and Five Guns West (1955). Corman is frequently reported as having produced or directed The Beast with a Million Eyes, although his name does not appears anywhere on the credits of the finished film.

The Beast with a Million Eyes was one of the more prominent examples among 1950s genre films where production companies – most famously American International Pictures for whom Corman later went to work – conceived of lurid titles and/or eye-catching posters and then tried to come up with a film to go with it. In the case of The Beast with a Million Eyes, the filmmakers get around the eye-catching title with the idea of a monster that remains an invisible influence until the very last scene and the million eyes are explained away as being those of the animals it controls.

There is the undeniable influence of the films of Jack Arnold, in particular It Came from Outer Space (1953), which came only two years earlier. Arnold became the finest genre director working within the science-fiction genre in the 1950s and his films – works like It Came, The Creature from the Black Lagoon (1954), Tarantula (1955) and The Incredible Shrinking Man (1957) – echo with a sense of an alienating landscape. Arnold seemed to prefer desert landscapes and in this respect The Beast with a Million Eyes could easily have been an Arnold film.

There’s an opening that almost seems designed to echo Ray Bradbury’s haunting dialogue for It Came from Outer Space where the camera tours the desert, showing images of scoured dunes, dry sand and animal skeletons. All of this seems an outward echo of a dried up inner state of mind as Paul Birch’s voiceover comes, expressing a strong metaphor between the forsaken emptiness of the desert and the failure of his farm and in turn the desolation of his marriage. It’s a powerful and resonant image. Later Lorna Thayer states: “I could stand it maybe except for the wasteland and the mountains. It’s like being on an alien planet.” This is pure Arnold – the alienation of the familiar Earth locations with humanity seen as a speck on the beach of geological eternity as a metaphor of our aloneness and vulnerability in the universe.

The film tends to fall down when it comes to David Kramarsky’s direction, which is pedestrian and generates little in the way of tension or atmosphere. The animal attacks are not very scary for the most part, although one supposes it is hard to make scenes of chickens and cows attacking people seem menacing. The only scene that generates any atmosphere is one where a dog comes after Lorna Thayer and one shot that manages to make it look quite sinister. There’s also a not too bad scene where Dick Sargent – later Darrin #2 of tv’s Bewitched (1964-72) – drives along a country road, picks up Him who emerges from the backseat and strangles Sargent, a scene all lit in shadows except for the two underlit faces. One of the decent aspects of the film is also a quite good score compared to most of the canned dramatically didactic scores that other B movies of the era had, which at times includes classical excerpts.

What you cannot help but notice in historical perspective is analogies between The Beast with a Million Eyes and Alfred Hitchcock’s The Birds (1963). Both have quite a similarity in that they feature animals turning against humanity with no apparent cause. There’s also the similarity of the set-up of a small group of people held at siege in a farmhouse by animals. On the other, while The Birds leaves everything unexplained The Beast with a Million Eyes adds an alien menace as explanation. Beyond The Birds, you can see a great many echoes of The Beast with a Million Eyes in the Nature’s Revenge films of the 1970s – Frogs (1972), Squirm (1976), Day of the Animals (1977), The Pack (1977) – where animals turned against humanity. (For a mre detailed view of the genre see Animals Amok Films).

There’s the rather amusing scene where Lorna Thayer, after having been attacked by a dog and chickens, abruptly realises around the 38 minute mark that she doesn’t hate her marriage after all and that she suddenly loves her husband and changes instantly. Here the film seems to be arguing that all the marriage needed was a crisis to jolt people out of their lethargy. There’s a climax where Paul Birch realises that they can unite together to defeat the alien because it has no concept of what love is.

As with a good many science-fiction films of the 1950s, the aliens are seen as having evolved into pure intellects (all brain) and lost their emotions. “For a moment there, I think he forgot he’d lost his soul,” Paul Birch comments. The film even arrives at an end, reminiscent of The War of the Worlds (1953), where it is implied that The Almighty is aiding humanity against the emotionless aliens. The alien possibly survives the destruction of its ship to possess a desert rat, only for the rat to be snatched up and devoured by an eagle. The family sit around wondering “I’ve never seen an eagle here before.” “Who sent the eagle?” with the implication being that the eagle was sent by The Almighty.

The Beast with a Million Eyes is not exactly sympathetic towards the intellectually handicapped (or for that matter war veterans). Leonard Tarver’s Him is regarded as sexually degenerate – he sits in his cabin looking at girly mags, has pinups on the wall, peeps in on Dona Cole as she bathes – while the rest of the people in the film are happy to refer to him as a loony. Moreover, there is the implication in that Him becomes easily possessed by the alien that the intellectually handicapped are only one step above animals.