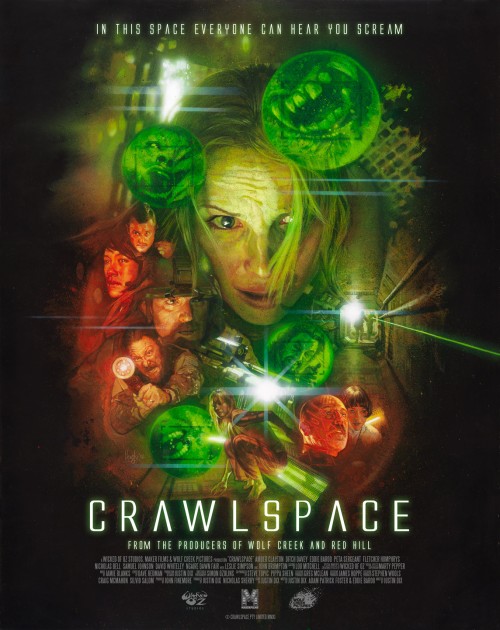 A troupe of heavily armed soldiers are sent into the military research facility at Pine Gap in the Australian desert. They have orders to eliminate everything there. Instead, the troupe’s leader Romeo encounters his wife Eve, whom he had believed dead. She is confused and has fitful memory but he determines to rescue her. As the soldiers navigate the narrow crawlspaces, fighting off the monstrous creatures that have been unleashed, the scientists warn them that Eve has undergone an experimental treatment that has turned her into a powerful psychic remote viewer and that she and others in the facility are capable of getting inside people’s minds.

Crawlspace – not to be confused with the tv movie Crawlspace (1972) about an aging couple who ‘adopt’ a mentally disturbed drifter or Crawlspace (1986) starring Klaus Kinski as an ex-Nazi landlord who peeps on and tortures his female tenants – is a debut feature for Australian director Justin Dix. Dix is better known as the head of the Melbourne-based Wicked of Oz and has worked on films like Star Wars Episode II: Attack of the Clones (2002), Star Wars Episode III: Revenge of the Sith (2005), Lake Mungo (2008), Long Weekend (2008) and The Babadook (2014), among others. Crawlspace comes co-produced by Greg McLean, the one other Australian director to rise to prominence in recent years with films like Wolf Creek (2005) and Rogue (2007), and his Wolf Creek Pictures production company.

At first glance and some way into Crawlspace, you get the impression that it is a variant on the alien nasties/laboratory experiment amok plot that we have had so much of since the 1980s. The tough military complement venturing into the narrow, darkened tunnels lit up by flashing lights of course harkens back to Aliens (1986) and many films that take themselves from that, in particular the variant we saw Resident Evil (2002), which had the tough military team dealing with escaped experimental creatures in a laboratory. Alas, you feel like you have seen all of this type of films before. Dozens of times before. Despite the name of Greg McLean on the credits who has conducted some exemplary work on his offerings, Justin Dix does nothing from a directorial standpoint that stands out from cliche. The characters and dialogue among the soldiers is one-dimensional – you get the impression that there is so much yelling of orders, gunfire, flashing lights and steam happening because there is nothing else going on for much of the film and that this visual busyness simply exists to keep you distracted.

On the other hand, Crawlspace does throw some interesting twists into the mix. Here it reveals that what we have in the laboratory are people who have been tinkered with to develop their psychic potential. [PLOT SPOILERS] There is nicely Philip K. Dick-ian moment where lead soldier Ditch Davey realises that the wife (Amber Clayton) that he had thought dead but resurrected in the laboratory is in fact a memory of his real wife that has been taken over by Eve and repurposed so that he will rescue her. This sort of takes the film less into the arena of the Aliens/Resident Evil modelled monster movie that we think we are getting at the outset and more into pure science-fiction. You could call Crawlspace a B-budget formula monster movie version of Beyond the Black Rainbow (2010) perhaps.

Alas, even with such an interesting twist, Justin Dix’s direction remains unexceptional. The psychic powers are depicted with effects that have become over familiar by now – nosebleeds, eyes turning black and the good old effect borrowed from The Fury (1978) and Scanners (1981) of people’s heads exploding (by now, one has become so used to it that it is simply a cliche effect). Despite a well worthwhile mid-film twist, the presentation and development of it is entirely uninteresting. Indeed, you reach the end of the film uncertain whether the monsters that were encountered earlier on are real or psychic illusions.