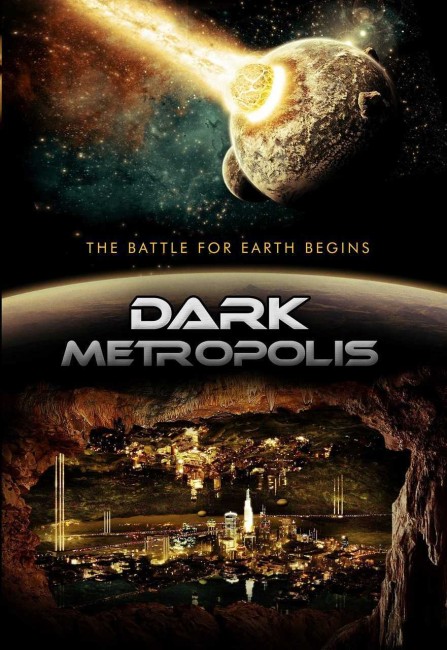 Mankind created a race of people with genetically enhanced DNA for use as soldiers. The Ghens, as they called themselves, rose up in rebellion, resulting in a three-hundred year long war, which the Ghens eventually won. The Ghens have now established themselves in a utopia beneath the Earth’s surface, while aboveground humanity has been stricken by a plague. Crecilius Pryme now seeks to be voted the ruler of the Ghens and uses harsh, fear-mongering tactics that play on the human threat. Crecilius recruits his brother Aiden from a life of scientific research to join the Ministers, an elite army he has created that conduct brutal reprisals against humans on the surface. Aiden soon finds that he enjoys the cruelty. Among the humans, the woman Mukayluh is a channeller, able to be possessed and prophesy words from the alien Kalendoah who talk of one who will come from below and bring peace between humans and the Ghen. Crecilius believes Mukayluh to be a danger and marshals all effort to stop her, unaware that the one of which she prophesies is far closer to home.

Dark Metropolis is an interesting low-budget science-fiction film. I was almost tempted to use the term ambitious but in truth its idea of a dystopia made up of genetic supermen is nothing particularly original. It is an effort that – at least at face value – gives the impression of standing out from the rest of the tedious sf/action hybrids.

The Ghen Utopia – the dark metropolis of the title – is designed with a certain exoticism. Characters have titles such as Potentate, Baron and Brother, which seem intended to suggest something of a mediaeval aristocracy, while their names are the exotic ones that science-fiction/fantasy writers come up with when they want to suggest a world that is different to this. The world is lit and dressed in a way that brings back memories of the alienated neo-noir of Dark City (1998), while the very title Dark Metropolis gives the impression that it has been intended as homage to Dark City and/or the classic Metropolis (1927), which was all about the war between underclasses and overlords.

All of that said, one feels that Dark Metropolis does nothing particularly interesting with the world it has created – the internecine politics are dull and never written with any particular nuance. Chief bad guy Eric Scott Woods is even outfitted in neo-fascistic black leather costuming as an unsubtle way of communicating he is like a bad dude.

On the other hand, when it does try to add something different to the mix, Dark Metropolis gets decidedly weird. Aside from the dystopian story, there is a whole other aspect to the film that seems to have one foot inside a woolly-headed mysticism. Far too much of this seems to be drawn from the sense of predestination and messianic strain that ran through The Matrix (1999) – prophecies of the predestined One who will come to save the upper world. This gets decidedly wacky when it gets to scenes with a human woman being possessed by what others call demons that are later revealed to be aliens. Nothing is ever explained about these aliens other than that they want peace and have created a series of prophecies.

The aliens seem a decidedly odd mix to throw into the existing strain of dystopias, genetically-engineered supermen and the politics of their world – Dark Metropolis almost begins to feel like a film with too many ideas in the mix for its own good. Either that or its makers were hoping to set up elements that they hoped would play out in a sequel. This is given particular evidence by the ending – while the film spends much time talking about revolution and prophecies of the One who would change everything, the end that Dark Metropolis reaches is simply that of Eric Scott Woods making an escape from the Ghen underworld and emerging into the sunlight of the surface world – an image that reminds of the end of THX 1138 (1971). It feels incomplete as an ending, like there is another entire half of the story to come.

Dark Metropolis disappoints. Its attempts to create a sense of an exotic high culture are paper thin, while the politics of the world seem dull and lack anything interesting to their twists and turns. The main problem with Dark Metropolis – particularly when you compare it to the model that it seeks to emulate, The Matrix – is that it talks itself to death. Where The Matrix‘s talking point were the Bullet Time action moves, Dark Metropolis has nothing of the sort. There are a few scenes with the Ministers taking on humans but these are so unmemorable that writing this up a couple of days after watching the film, I strain to remember even a single thing about any of them.

Dark Metropolis was a debut feature for Stewart St. John. St. John had previously worked as a writer on series such as Mighty Morphin Power Rangers (1993-6), Power Rangers Zeo (1996-7), Sabrina the Animated Series (1999-2001) and the internet series California Heaven (2005-6). St. John had previously directed The Next Race: Remote Viewings (2007), a 38-minute short film featuring the same cast here. Dark Metropolis is announced as the second part of the Creation Wars saga, although it and Remote Viewings have exactly the same plot. Stewart St. John announced two Dark Metropolis sequels, although we have yet to see anything of these or in fact anything else from St. John.