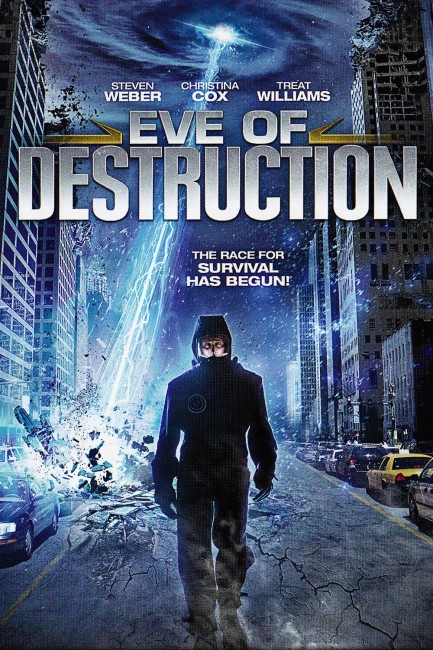 In Denver, Karl Dameron and Rachel Reed head The Proteus Project funded by GMO foods magnate Max Salinger. When activated their project, the DRIL Trigger, will tap dark energy and provide a source of unlimited power. However, a test run causes an energy discharge that kills a technician. The lineman Ruslan panics when he sees the purple glow the reactor emits into the sky. He tries to get to Dameron to warn him, saying that he was witness when the same experiment was conducted in Russia a decade ago and ended up wiping the entire town of Lhitiska off the map. Dameron is troubled by these claims and starts to investigate what happened. Meanwhile, the unscrupulous Salinger, who has an important government contract dependent on the success of the Proteus Project, starts putting pressure on the team to ignore the negative results and push ahead. At the same time, Dameron’s daughter Ruby has been drawn in by the radical protest group P53. She is able to obtain one of her father’s security access passes for them, only to find herself dragged along as the group plans to blow up the power plant. As the experiment is activated, these coinciding factors create a runaway surge of dark energy coursing through the power grid that threatens the entire planet.

Eve of Destruction feels like a B-budget Syfy Channel movie that has been excruciatingly stretched out to fill a four-hour mini-series slot. Everything about it reads as bland and generic. Rob Lieberman’s direction is all canned pieces of melodrama and soap opera – about teenage daughter Jessica McLeod being taken advantage of by the protestors; the double-dealing tactics of the company management; whether Steven Weber and Christina Cox will realise an attraction for one another.

What is worse than a cheap and indifferent Syfy disaster movie though is a mini-series that spends all its time on bogus technical double-talk and pseudo-scientific explanations. The show exists all as build-up without ever delivering any of the pieces of disaster spectacle and drama that make some of these films watchable. Most of this involves people reacting urgently to a non-menace – purple lights in the sky, an ominously arcing box in the reactor core. The only time we get any spectacle comes at the very end when things finally go bang and there is a race to reverse the catastrophe. In actuality, this proves incredibly dull – a draggingly tedious four-hour storm in a teacup that only provides some pretty flashing lights at the end of it.

This is also a disaster show that grasps at trendy fads and headlines. There is much in the way of reference to YouTube and Facebook pages. The screenplay awkwardly tries to wind in the protestors of the Occupy era in a subplot that in no time has slid over to paint them as terrorists. In another ripped headline, the group also seem to be protesting against GM foods – although how this relates to blowing up power stations set up for experiments dealing in dark energy is not made clear other than that you feel the mini-series is wanting to shoehorn a bunch of unrelated headline issues into a plot.

Director Rob (or more commonly Robert) Lieberman premiered with the supposedly true-life alien abduction film Fire in the Sky (1993). He has since mostly worked in television where he has directed other genre mini-series such as the futuristic cyber-thriller Net Force (1999), the fantasy mini-series Earthsea (2004) and the alien invasion mini-series Final Days of Planet Earth (2006), as well as the horror film The Tortured (2010).