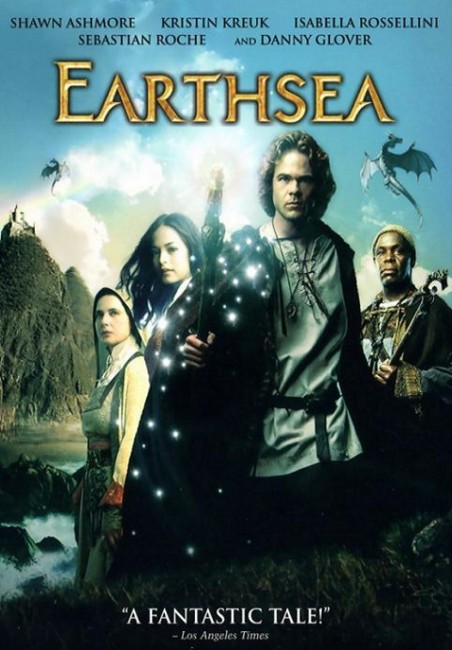 The land of Earthsea is made up of an archipelago of 1001 islands. In the Village of Ten Elders on the island of Gont, the blacksmith’s son Ged wants to be a magician. Meanwhile, Tygath, the king of the Kargides from the isle of Atuan, receives a prophecy that a wizard will be his undoing and sends his troops forth out across the archipelago to find the wizard. As the Kargide warriors invade Gont, Ged conjures a mist that drives them away. Afterwards the magus Ogion takes Ged as an apprentice and gives him the true name of Sparrowhawk. Meanwhile, Tygath has seduced Kossil, a handmaiden of the sisterhood that guards the Tombs of Atuan. Tygath wants to obtain the secrets to unlock the gates of the tombs that imprison The Nameless Ones to obtain the secret of immortality. Kossil plots to poison the high priestess Thar and succeed her but Thar confounds this by appointing the bright young Tenar as her successor. Ged leaves Ogion and becomes an apprentice at the school for magicians on the isle of Roke. During a competition, Ged seeks to best a rival by conjuring the dead, only to inadvertently unleash a gebbeth shadow creature. He is forced to leave the school and ventures out into Earthsea. He is pursued by the gebbeth, which seeks to possess him and kills all it encounters. At the same time, Ged dreams of Tenar and realises that the end of his quest may lie in the Tombs of Atuan.

Ursula K. Le Guin (1929-2018) is celebrated as one of the great writers of science-fiction and fantasy, and possibly the finest woman writer in the genre. Le Guin has won numerous Hugo and Nebula Awards for novels like The Left Hand of Darkness (1969) set on a planet where the inhabitants change sex; The Lathe of Heaven (1971) about a man whose dreams end up altering reality; the novella The Word for World is Forest (1972, expanded to a novel 1976) about the despoliation by colonists of an alien society whose entire world consists of a forest; and The Dispossessed (1974), which offered a depiction of a society based on anarchist principles. Some of Ursula Le Guin’s most famous books have been the Earthsea series, which consists of A Wizard of Earthsea (1968), The Tombs of Atuan (1971), The Farthest Shore (1972) and two belated follow-ups – Tehanu: The Last Book of Earthsea (1990) and The Other Wind (2001), as well as Tales from Earthsea (2001), a series of short stories set around the locale. The Earthsea series takes place in an archipelago of 1001 islands and concerns itself (principally) with the wizard Ged and his rise from novice to archmage.

The Earthsea tv mini-series was mounted as a co-production between the US Sci-Fi Channel and Hallmark Entertainment, who have been responsible for a number of often excellent adaptations of classic works of literature and fantasy. (See below for Hallmark’s other genre credits). The mini-series combines both A Wizard of Earthsea and The Tombs of Atuan into one story. Ursula Le Guin made the decision to sign over the rights as she had been impressed by Hallmark’s mini-series Dreamkeeper (2003) about American Indian myths and the producers represented that they had Lord of the Rings co-writer Philippa Boyens onboard. However, after seeing the finished production, Le Guin protested heavily at the adaptation and issued several online statements that were heavily damning of the changes that had been made to her work. In particular, Le Guin was scathing about director Robert Lieberman’s claiming to speak on her behalf in an interview in saying that he was being true to her themes of the harmony between paganism and wizardry and between belief and unbelief, themes that Le Guin said were never in the book.

Ursula Le Guin’s biggest upset appears to be the issue of race. In the books, Earthsea was a land of people who had identifiably different coloured skins – the hero Ged has red-brown skin, for instance. (This was Le Guin making a point of breaking away from the automatic preference that most fantasy unconsciously sides with in creating lands that are populated primarily by white people). However, the mini-series has been cast with standard Caucasian actors, with the exception of the African-American Danny Glover.

There are a great many other changes between the mini-series and the books. Most notably, the scriptwriter has screwed up and named the central character Ged and has him given the true name of Sparrowhawk, rather than vice versa as Le Guin had it in A Wizard of Earthsea. The changes are most notable when it comes to the adaptation of The Tombs of Atuan. In the novel, Tenar traps Ged inside the lightless tombs where he must use his magic to stay alive and avoid discovery by The Nameless Ones. During his imprisonment, a slow friendship grows between he and Tenar and at the end he helps her escape from a life of ritual service. In the book, the priesthood is not as benevolent as seen in the mini-series; the tombs are not lit by torches every few metres but are entirely in the dark; and there is no political chicanery and sexual jealousy at the forefront of the story.

There is no genuine magic to the mini-series. Rather than sing with the sweep of epic fantasy in the way that Peter Jackson’s The Lord of the Rings does, Earthsea feels exactly like tv filler. In the books, Ursula Le Guin expended a great deal of time creating a world with a depth and culture but nothing of this survives in the mini-series. All the elements in the mini-series are played exactly as though they are clichés from the sword-and-sorcery genre. Even beyond seeming like poor sword-and-sorcery, Earthsea is shabbily and indifferently directed. The character of Tygath is all hackneyed evil dark lord posturing – the scenes with Sebastien Roche running around grabbing people by the throat and bawling threats are such cliché villainy that they instead emerge as camp and with zero threat. The Gebbeth, which in A Wizard of Earthsea is supposed by Ged’s dark shadow self, looks like no more than a cheapo demon out of some bad horror film. The dialogue is dreadfully clunky and often excruciatingly bad. It is filled with grating anachronisms like when Ged asks his stepmother: “What’s the spell going to be today?” to be told “Actually, I was just making myself a salad for lunch.” Or lines like “The doors are impenetrable,” “You should have asked for your money back.”

Many of the backgrounds – the castles on islands, the whole of Atuan, the magical wave the Arch Magus creates – look like cheap and obvious digital effects. The wizards all have fake beards. The single decent set is the giant pillar surrounded by candles that guards the gates of the Tombs of Atuan. Shawn Ashmore seemed a promising young actor in X2 (2003) but his lead performance here only has a wooden handsomeness to it.