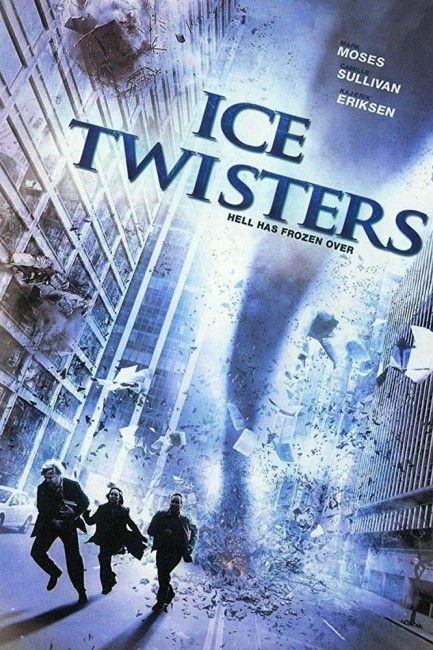 A team from the Federal Science Foundation is conducting an experiment using automated drones to create clouds. However, this goes wrong, resulting in the creation of an ice storm that abruptly hits the town of Harrisford, Oregon, freezing everything it touches. Charlie Pride, a former meteorological scientist now turned best-selling author with a series of lurid novels about meteorological disasters, is on a book-signing tour in Harrisford and sees the storm hit. As the team rushes to the scene, he recognises head scientist Joanne Dyson, an old colleague of his, and insists on tagging along. All over the countryside, ice tornadoes are abruptly appearing and freezing people and areas of land. Charlie deduces that the cloud seeding experiment had drawn moisture from the mesosphere, causing a vast influx of super-cold from above. As they try to stop the ice twisters before they get to a major urban centre by shutting the drones down, Joanne discovers that her military backers have locked her out of the system, seeking instead to test the weapons potential of the discovery.

One settles into Ice Twisters expecting all the formula of the typical Syfy Channel disaster movie – the canned pieces of drama, the cheap digital effects, the hero with the discredited theory who can save the day, the last minute attempts to save the situation. The set-up about a wave of supercold creating chaos is very similar to another film around the same time Arctic Blast (2010), while several others of these were also dealing with super-cold storm themes and/or the onsets of new Ice Ages.

On the other hand, Ice Twisters sort of surprises. While it never strays too far from the cheap and tatty basics of the Syfy Channel disaster movie, it does make the characters work with a certain degree of wit and sparkle. There is Mark Moses as the meteorologist turned author who is constantly making sardonic suggestions and rankling the regular scientists of the group. (The script makes a number of digs about him being a hack writer of a series of disaster novels about improbable meteorological scenarios, which treads a fine line given that Ice Twisters is itself a hack B budget meteorological disaster movie based around a scientifically improbable premise). This sparring and interplay at least gives the characters more depth than the usual stock cut-outs that we get in these Syfy Channel disaster movies and goes a good way towards disguising the routineness of the action and dramatic set-pieces happening around them.