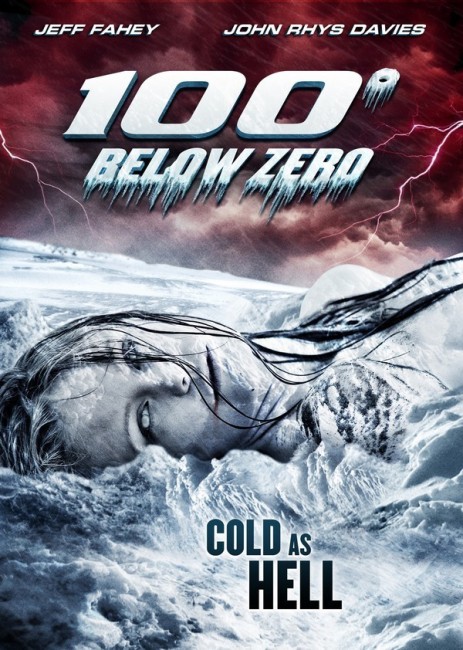 A volcanic eruption in Iceland sets off a series of other volcanoes all across Europe. This sends up a combined ash cloud that scientists estimate will plunge Europe down to sub-zero temperatures for the next two years. Former US Air Force pilot Steve Foster is flying to Paris in his small two-engine plane to join his two teenage children Ryan and Taryn who are both students there so that he can introduce them to his new wife Lacey. They are forced to put down in England by the onset of the cold front and struggle to make it through the Eurotunnel to get to the children. Meanwhile, the two children try to make it across Paris to the rendezvous point as the sub-zero temperatures cause the city to plunge into chaos.

All of the abovementioned Syfy Channel disaster movies run to a formula and 100° Below 0 is no different. Most of these films feature scenarios that are highly improbable if not outrightly fanciful in terms of geology, astrophysics or meteorological phenomena. With 100° Below 0, this is so much the case that it is hard to actually tell what is going on – a volcanic eruption in Iceland somehow triggers a wave of volcanic activity all at once across Europe, sending up an ash cloud that will plunge the region down to sub-zero temperatures for over two years (something that happens in a matter of hours – such an ash cloud would in reality be no different to a very cloudy day, the Ice Age effect you would get would come from the gradual cooling of Earth because it would prevent much sunlight from getting through), while at the same time has also created a rise in global warming resulting in tornados menacing the area. It is probably a good idea to not look too closely at what is going on as you get the impression that the filmmakers haven’t exactly either.

Despite the premise of such an enormous catastrophe, unlike say the similar big-budget The Day After Tomorrow (2004), depiction of the wide-scale effects are ignored and the film instead focuses on small-scale dramas. This is mostly centred around the two children (Marc Ewins and Sara Malakul Lane) as they wander around Paris – they go to the US embassy where there is much drama as they fall through a hole in the floor; are held at gunpoint by a furrier (Tamas Deak) after venturing into a shop to obtain coats; are taken away by French soldiers and then trapped in a burning car and so on. Jeff Fahey and John Rhys Davies are the top-lined actors but most of their scenes are limited – Davies, in particular, is confined behind a desk right up until one scene at the end.

To its credit, The Asylum appear to have gone and conducted some locations shots in Paris (in front of the Eiffel Tower), although everything else has been shot on the cheap in Hungary. What does get you is how the film is telling us by its very title that the temperature is one hundred degrees below zero and yet you have people wandering around the streets of Paris in t-shirts. Moreover, there is no real evidence in terms of anything done on screen – like filling the backgrounds with snow – to convince us that we are in the midst of such a situation. All of the abovementioned disaster films are dominated by cheap digital effects. The climax here is an improbable piece of action that involves the children climbing the Eiffel Tower at the same time as it is collapsing and an ice tornado is approaching while Jeff Fahey arrives in a helicopter and requires them to slide down a cable to get aboard.

100° Below 0 was the second film for R.D. Braunstein who subsequently went onto make I Spit on Your Grave 3: Vengeance is Mine (2015). The script comes from Richard Schenkman who has directed the impressive The Man from Earth (2007) and one of The Asylum’s better films Abraham Lincoln vs Zombies (2012).