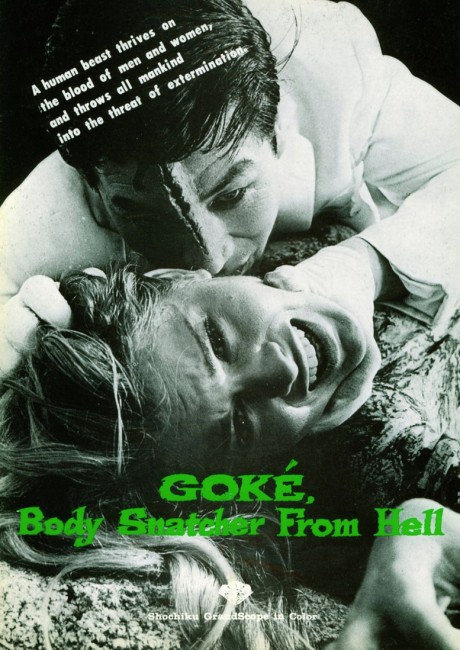 aka Body Snatcher From Hell

A commercial airliner takes off from Tokyo but soon into the flight the crew receive notification from the control tower to say that a note has been left informing them that there is a bomb on board. They institute a search of all the passengers’ hand luggage before one of the passengers Teraoka pulls a gun on them. In the midst of this, the pilot sees a bright light in the sky and the plane goes down, crashing on a beach. In the aftermath, they decide to wait it out until a search party finds them, which is complicated by not knowing where they are. Fleeing the scene, Teraoka finds a UFO landed on the other side of the cliffs and enters, only for an alien blob to split open his forehead and take over his body. The alien is one of the invading Gokemidori who are taking advantage of the fact that humanity is at constant war to invade the planet. As the survivors bicker amongst themselves, the Gokemidori returns to drink their blood.

Goke, Body Snatcher from Hell is a Japanese monster movie/alien invader film. It is frequently thought to be one of Toho’s regular monster movies but in fact comes from a different company Shochiku that has been making films all the way back to the 1920s and are still at work today, principally in anime. During this period, Shochiku principally specialised in crime and yakuza films but dabbled in a number of other genre films with the likes of The X from Outer Space (1967) and Genocide (1968).

Every one of Toho’s monster movies and alien invader films are utterly stolid when it comes to the human content – that is still the case even of the films they are making in the 2000/2010s. The humans are little more than cardboard cutouts that stand around and say things in the scenes in between the special effects. At most, they might get a romance. This is what makes Goke, Body Snatcher from Hell so different. Aside from its science-fictional elements, it could almost be a disaster movie, a genre that did not emerge until a few years later with Airport (1970) and sequels, The Poseidon Adventure (1972) and The Towering Inferno (1974). Goke seems to prefigure the disaster movie where we have a bunch of people stranded in a situation and the drama is the sweaty tensions, backstabbings and betrayals between them, Certainly, the characters are little more than caricatures – the self-serving businessman and politician, the token American, the hero and passive heroine, a very creepy psychologist who argues in favour of letting the creature attack people to see what will happen – but it is nice seeing a film that is making an effort to be more than the standard Toho effects spectacle.

Goke has been made in a way that seems determined to maximise the Fujicolor scope format. The garishness of the orange skies leaps off the screen and leaves you feeling giddy. This is none more the case when it comes to the meeting with the alien – a UFO that is represented by a glowing sphere of light and an alien that is like a blob of iridescent blue paint. The alien enters Hideo Ko after splitting open his forehead and he subsequently wanders about with a massive crack-shaped wound in the middle of his brow.

Goke, Body Snatcher from Hell has been intended as an alien invasion film – a genre that was popular in Japan throughout the 1960s, The film borrows the body snatcher theme and oddly also tries to push it over into horror movie territory by combining it with the vampire theme. The space vampire theme had been done before this beginning with Not of This Earth (1957), Queen of Blood (1966) and the Star Trek episode The Man Trap (1966). It was there by implication in It! The Terror from Beyond Space (1958), although neither Planet of the Vampires (1965) and Horror of the Blood Monsters/Vampire Men from the Lost Planet (1970) feature vampires. There were later efforts such as the Doctor Who serial State of Decay (1980), Bloodsuckers (1984), Evils of the Night (1985), Vampirella (1996) and most famously in Tobe Hooper’s Lifeforce (1985).

As seems to be mandatory for almost any Japanese monster movie, the film comes with a subtext. 1968 was the height of the Vietnam War and the protests against it, thus Goke has a character specifically written in as an American – the widow of a soldier killed while on duty in Vietnam who decries the pointlessness of the war. There is a strong anti-war theme running throughout where the aliens see humanity’s constantly being at war as ripe opportunity to invade Earth. (I am sure the logic of this would fall apart with a moment’s serious thought). Being a Japanese monster movie, this also manages to wind in the inevitable associations with the atomic bomb.