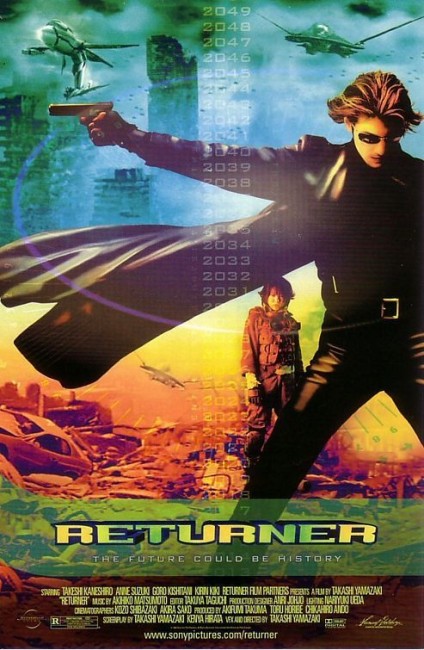 The hired hitman Miyamoto shoots up a Yakuza operation. In the middle of the action, Miyamoto encounters his sworn enemy Mizoguchi, who killed his best friend as a child. During the midst of the shootout, a mysterious girl Milly appears out of nowhere and is accidentally shot by Miyamoto. Miyamoto takes her home. When she comes around, she plants an explosive on his neck and demands that he help her. She tells a fantastic story – that she has come back from the year 2084. There humanity has been nearly wiped out by the invading alien Daggra. She has come back in time to try and prevent the invasion. Forced to help with the explosive on his neck, Miyamoto starts to realise that what she says is true. Meanwhile, an alien ship has crashed and been taken to the Institute of Space Science. There Mizoguchi is determined to obtain the secrets of its advanced technology. As Milly breaks in to try and prevent the invasion by killing the alien, she realises that the alien’s intentions are peaceful and that it was Mizoguchi’s treatment of it that provoked the invasion.

Returner is a modestly effective Japanese-made science-fiction film. It feels like a film that has been construed by its makers as an exercise in as many colliding genres as possible – it is a time travel film that falls into the tropes patented by The Terminator (1984) and numerous copies; it is an alien invasion film; it is also a Yakuza film and comes strongly influenced by the stylistics of the Hong Kong gangster movie as patented by John Woo. It is also not above borrowing many of its moves from The Matrix (1999) – we even get a Bullet Time sequence in the middle of the film with the sped-up hero and heroine ducking slow-motion bullet trails.

For all his seeming ability to construct a film that is a magpie collage of different genres, director Takashi Yamazaki makes an enjoyable film out of Returner. He lets the Woo and Matrix-styled action sequences move with a satisfyingly stylish and often exhilarating kick. Takashi Yamazaki’s background is in visual effects and animation and, not unexpectedly, the best scenes in Returner are some of the effects scenes.

There is a dazzling scene early in the show that begins with the wonderfully cool image of a fighter plane coming down in the mountains of Tibet and, in a lovely mix of hi-tech and low-tech, being waved into a landing position by a monk with pilot lights; the plane folding apart like a Transformer as it comes to a landing to reveal that it is filled with alien robots; followed by a full-on battle between the robots and human forces whose bullets merely dent into the forcefields projected by the robots. Elsewhere, there is a nifty scene where Anne Suzuki activates her time accelerating device, tosses the contents of a cup of water up into the air, runs across the room to put the contact explosive back on Takeshi Kaneshiro’s neck and then back to catch the water in the cup as it falls, all in the time it takes him to draw his gun.

There is an amazing sequence where hero Takeshi Kaneshiro detonates a bomb that blows the alien ship up, sending its shell heading towards they and the Yakuza thugs whereupon he activates the time accelerator device and he and Anne Suzuki dance up the pieces of detonating debris to jump inside the shell of the ship as it explodes apart and then comes back together, falling to the ground cushioning them safely inside.

The effects sequences are excellent with some superb planetary scapes and shots of alien ships crossing the devastated Earth, as well as a stunningly lovely shot of an airliner folding apart like a Transformer robot to reveal it is an alien ship. Perhaps the film’s weakness is that Takashi Yamazaki concentrates more on action visuals and special effects than in putting any wild conceptual twists on the time travel plot, although things cleverly come together in an appealing end coda.

Takashi Yamazaki had previously made the science-fiction film Juvenile (2000). Subsequent to this, he returned to the genre with the lavish big-screen remake of the anime tv series Space Battleship Yamato (2010); Stand By Me Doraemon (2014), an animated spinoff from the popular anime series; the manga adapted Parasyte Part 1 (2014) and Parasyte Part 2 (2015) about body snatching parasites; the manga adapted fantasy Destiny: The Tale of Kamakure (2017); and the animated films Dragon Quest: Your Story (2019) and Lupin III: The First (2019). Yamazaki had a series of hits with the non-genre family films Always – Sunset on Chrome Street.