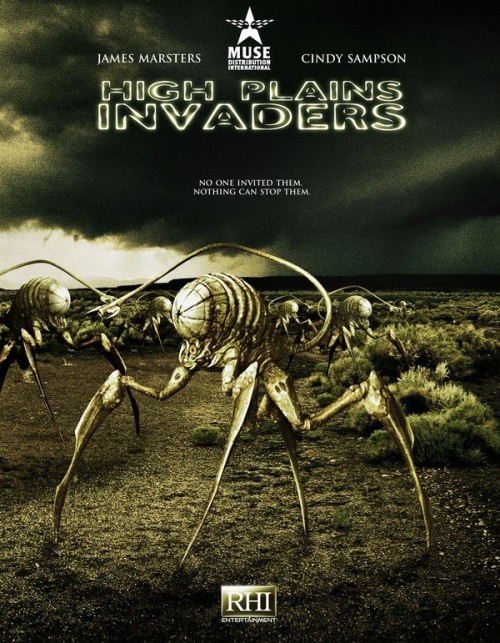 The small town of Avaranth on the Western frontier, the year 1892. The notorious train robber Sam Danville has been arrested by the female bounty hunter Rose Hildridge and is about to be hung. The hanging is abruptly interrupted as the town is invaded by large alien bug-like creatures, which rapidly slaughter most of the population. Sam gets free and takes shelter with a handful of survivors. He tries to organise them to find a means of discovering the alien invaders’ weakness.

High Plains Invaders is a modest direct-to-dvd release, made by the Canadian company Muse Entertainment and RHI Entertainment. Behind the director’s pseudonym of K.T. Donaldson is actor turned tv director Kristoffer Tabori. The film is executive produced by Robert Halmi Jr, one of the key figures behind the now defunct Hallmark Entertainment.

With the wittily titled High Plains Invaders, we get the amusing notion of a Western/alien invasion crosshatch. The Western/alien visitors concept has been conducted before with the low-budget The Aurora Encounter (1985), while the concept here is surprisingly similar to the subsequent big-budget Cowboys & Aliens (2011). I had no idea what to expect from High Plains Invaders before sitting down to watch – a few too many of these gimmicky titled films turn up on the Sci-Fi Channel and prove to only be crappy B movies with little redeeming quality beyond their titles. The surprise about High Plains Invaders is that, firstly, it is a film that takes itself seriously and, secondly, how it turns out surprisingly modestly.

The film creates the familiar Western milieu with a surprising degree of verisimilitude. Various nitpickers have jumped on aspects about the guns being too modern for the era or the poison aspects of uranium not being known during the film’s time period. Again, this falls into the category of being nitpicks if you have researched the period well enough to know but do not otherwise impact on the enjoyment of the film. Elsewhere, the people look and act as though they belong to the era, while the sets have the look of authenticity (a surprise given that High Plains Invaders was shot in Romania, not exactly a location that seems a ready Wild West environment).

There is an appealing lead-up that shows us around the town, introducing most of the characters, and talks about the upcoming hanging before abruptly cutting away from the gallows to show that the person being mentioned – the only recognisable name face in the cast list, James Marsters aka Spike of Buffy the Vampire Slayer (1997-2003) cult fame – is the prisoner sitting in the jail cell about to be hung. The hanging is then thrown on its head by the unearthly out-of-the-blue appearance of the aliens, which look like miniature quasi-insectoid variations on H.G. Wells’s Martian war machines in The War of the Worlds (1898). Their initial appearance and attack on the town is striking – in one amazing shot, we see them spearing a townsperson right through their body and impaling them to the ground with their long metallic scorpion-like stinger. The visual effects used to produce the alien machines and their mothership is far better than is usually the case for low-budget films like this.

After the appearance of the aliens, the film settles down into a siege situation with a group of tightly drawn and effective characters huddled together and their respective tensions as they try to determine the nature of the aliens and find a means of outwitting them. One of the more amusing aspects is that the film has to weaken the usual arsenal of alien armaments – giving them only stingers and what look like little more than the equivalent of the six-guns the survivors are armed with. You then realise that if the invaders had been outfitted with rayguns or Wells’s heat rays, the entire town would be a pile of ash in no time at all. It is a practicality move but one that makes the invaders seem on the wimpy side. Nevertheless, High Plains Invaders works its way towards a modestly effective and convincing climax and is far better than one might think.