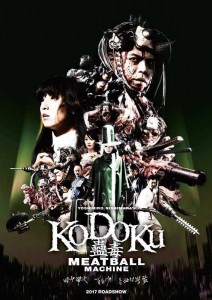 Yuji Noda is a downtrodden debt collector aged fifty. He faces bills on all sides and is struggling to make ends meet. On top of this, he is diagnosed with cancer. He saves Kaoru, a cute employee at the bookstore he visits, from Sakai, an aggressive youth constantly pestering her to come for a ride in his car, and she invites Yuji home. The next morning, Kaoru’s younger brother runs through the neighbourhood accusing Yuji of molesting her and Yuji is pursued by police. Just then a giant glass container falls down from space and covers an area of the city. Inside the container, people start to mutate into bio-mechanoid creatures, each of which is based on that which they are obsessed with. Yuji starts to be affected but his cancer kills the parasite that controls the mutation. Kaoru is abducted by Sakai, who has been transformed into a bio-mechanoid vehicle. Yuji uses the abilities afforded by his transformation to pursue Sakai across the city to rescue her, eliminating the mutations in his way.

Meatball Machine (2005) was a remarkable film that was premised around a series of over-the-top makeup effects that involved characters being transformed into bio-mechanoid creatures and battling each other. The plot made no real sense but the makeup effects proved highly entertaining. The makers didn’t know it at the time but the film set down the basics of what over the next few years became the gonzo Japanese splatter film with the likes of Attack Girls’ Swim Team vs. the Undead (2007), Hard Revenge, Milly (2008), Machine Girl (2008), Tokyo Gore Police (2008), Robo Geisha (2009), Samurai Princess (2009), Vampire Girl vs Frankenstein Girl (2009), Big Tits Zombie (2010), Gothic & Lolita Psycho (2010), Helldriver (2010), Mutant Girls Squad (2010), Zombie Ass: The Toilet of the Dead (2011), Dead Sushi (2012) and Bloody Chainsaw Girl (2016). These are films that specialise in bio-mechanoid transformations, bizarrely over-the-top gore and splatter, a surreal sense of humour and an obsession with schoolgirls wearing panties.

The effects in many of the abovelisted were conducted by Yoshihiro Nishimura who has worked on films such as Suicide Club (2002), Death Train (2004), Noriko’s Dinner Table (2005), Strange Circus (2005), Exte: Hair Extensions (2007) and a number of efforts amid the gonzo splatter cycle like Machine Girl, Robo-Geisha and Samurai Princess and of course Meatball Machine. Nishimura made his directorial debut with Anatomia Extinction (1995) and is co-director on other gonzo splatter films such as Tokyo Gore Police, Vampire Girl vs Frankenstein Girl and Mutant Girls Squad. On his own, he has made Speakerman: The Boo (2004), Helldriver, Ninja Torkage (2014), the Z is for Zetsumetsu segment of The ABCs of Death (2012) and the Hell Chef episode of The Profane Exhibit (2013).

Meatball Machine: Kodoku, or Kodoku: Meatball Machine on some versions, is nominally a sequel to Meatball Machine. It features more bio-mechanoid transformations battling it out in the city streets. You could stretch a connection and say that it also has a similar plot about a socially awkward Japanese man trying to connect with a cute girl and save her after she is dragged off by bio-mechanoids. But resemblances endeth about there. In its confused plot, Meatball Machine offered up an explanation about the bio-mechanoids being parasites that were created by a mad scientist, whereas this film has a quite contradictory explanation about what looks like a giant drinking glass coming down from space and being placed across a section of the city and everybody inside being transformed into bio-mechanoids, all (as the end reveals) to make a marketable juice for aliens.

Yoshihiro Nishimura has been responsible for some of the wildest makeup effects in the abovementioned gonzo Japanese splatter films. Hence one anticipated what he would do in making a sequel to Meatball Machine, the film that started the fad off. There are some entertaining effects when the giant glass arrives – a man peeing against a lamppost having his dick severed in a giant gout of gore and most entertainingly two people having sex in a back alley having their torsos severed while the bottom halves keep on humping.

On the other hand, some of the other transformations seem a little silly – strippers with arms that are giant forks, a secretary with scissors for arms, a bolas formed of two severed heads and particularly some of the scenes at the nightclub fighting off mutated strippers. In that these gonzo Japanese splatter genre seems to have tapered away during the latter half of the 2010s, it may well be that interest in these films has started to die off. Certainly, this fails to match the wacky creativity of the original or many of the abovementioned entries.

The most entertaining aspect of the film are the scenes with Masanori Mimoto transformed into a bio-mechanoid vehicle and racing around the streets with an abducted Yuri Kijima on his back (along with her boss Seminosuke Murasugi trapped inside a trailer being dragged behind the vehicle), while the transformed hero tries to rescue her. The film’s most lunatic scenes involve Yuri whipping her top off and using it and her bra as a bridle and riding Mimoto through the streets as though he were a horse.