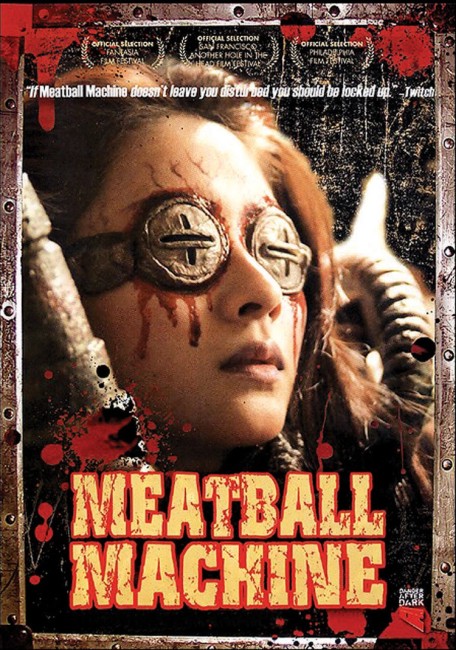 Around the city, people are being taken over by Necroborg creatures that consist of writhing tentacles that turn their human hosts into a bio-mechanoid mass of machine attachments. The creatures also war with one another every time they meet. Yoji is a shy, virginal factory worker who pines for Sachiko, the girl he always sees placing out laundry on the nearby allotment as he takes his lunch break. Yoji finds the inert armoured shell of one of the Necroborgs and brings it home. He then comes across one of his co-workers trying to force his way with Sachiko but is beaten up after trying to intervene. She helps him home where they recognise a mutual attraction, only for the Necroborg shell in his cupboard to come to life, attach itself to her and transform her into a bio-mechanoid. After fighting with the transformed Sachiko, Yoji is rescued by the scientist Tsujimoto who reveals that he created the Necroborgs. They can only subsist by consuming each other and his daughter Michino has been partially transformed. He wants to transform Yoji into a Necroborg in order to feed Michino but Yoji escapes partway through the process. Yoji then sets out to save Sachiko, resulting in a massive fight through the streets between the two of them.

Meatball Machine was the very first of these gonzo splatter films and set the template that the others that followed. In itself, it was drawn from an earlier film Meatball Machine (1999) made by Junichi Yamamoto, who is listed as co-director here along with Yudai Yamaguchi. Yamaguchi was an associate of Ryuhei Kitamura who had worked with him since Kitamura’s first short film Down to Hell (1997) and wrote the screenplays for Kitamura films such as Versus (2000) and Alive (2003). As director, Yamaguchi has made Battlefield Baseball (2003), Chromartie High School (2005), The Present (2005), Tanami: The Baby’s Curse (2008), Dead Ball (2011) and Abductee (2013), as well as episodes of the anthologies Ten Nights of Dreams (2006), An Encyclopaedia of Unconventional Women (2009) and The ABCs of Death (2012). He also co-directed Yakuza Weapon (2011). Junichi Yamamoto is listed as having made four other films but none of these appears to have any high profile.

The real source of inspiration for Meatball Machine is Shinya Tsukamoto’s Tetsuo: The Iron Man (1989) and its surreal, highly sexualised imagery of machines and human flesh meshed together. Meatball Machine could be said to be the comic-book version of Tetsuo. It is filled with delightfully absurd images like the man-machine hybrid who comes with a breastplate windscreen and a miniature set of wipers that pop up to clean off the splattered blood.

The film contains some amazing makeup and costuming effects that lead to sensational set-pieces – the highlight of the show is one where an armadillo-like piece of armouring comes to life and turns into a set of writhing tentacles that rapes heroine Aoba Kawai, transforming her into a cyborg. (There are some decidedly unhealthy sexual fetishes that frequently get worked out in these Japanese splatter films and the film seems to tap the recurrent hentai fetish for women being violated by tentacled creatures). There are other wild and surreal images – like those of tiny hands tearing their way out of a scar on the heroine’s chest.

In many regards, Meatball Machine is quieter than many of the gonzo splatter films that followed. The confrontation between Yoji and Sachiko often consists of little more than the two just trading punches. Also the scheme behind it all involving body snatchers that have somehow been created by the mad scientist to feed his daughter cries out for a whole lot more explanation than it ends up getting in the scanty screenplay. That said, the film does get itself together for an entertaining finale that does approach some of the over-the-top moves that feature in the later gonzo splatter films involving the two of them wielding built-in flamethrowers, buzzsaw hands and Issei Takahashi producing a massive cannon from his chest.

Meatball Machine: Kodoku (2017) is a sequel directed by Yoshihiro Nishimura who provides the makeup effects here.