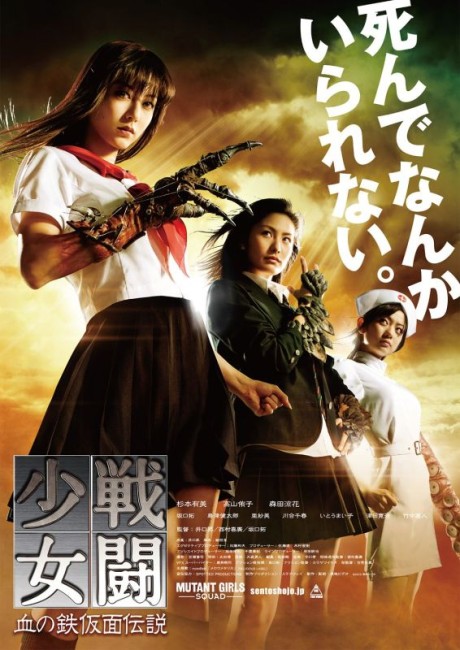 It is the sixteenth birthday of Rin, a Japanese schoolgirl. After being bullied and knocked down the stairs by other girls at school, she comes around in the school sickbay as a woman scientist attempts to inject her. She finds she can manifest a part-mechanical clawed hand and uses this to make an escape. Returning home, her father reveals to her that he is one of a breed of ancient mutants named Hilko – he himself has tiny mewling creatures instead of nipples and a crotch – just before security forces burst in to eliminate them. Rin uses her abilities in a bloodbath of violence and then moves through the streets slaughtering everyone she encounters. She is found and taken in by a squad of girls, all Hilko with various mutations that include weapons emerging from body parts, extra faces on their stomach and the ability to detach their heads. Regarded as the junior member of the squad, Rin is put through a punishing training regimen but soon proves herself. She is sent to eliminate a government minister who is leading a crackdown against the Hilko. After discovering the group leader Kisiragi’s plan to slaughter humanity en masse and use their blood to raise the deity Izanami, Rin takes a stand against this.

Mutant Girls Squad comes from no less than three directors. These include Noboru Iguchi, a director of Japanese porn films since the late 1990s, who discovered the gonzo splatter genre with Machine Girl (2008) and went onto the likes of Robo Geisha (2009), Karate-Robo Zaborgar (2011), Zombie Ass: The Toilet of the Dead (2011), Dead Sushi (2012), Live (2014) and Ghost Squad (2018), as well as the F is for Fart episode of The ABCs of Death (2012). Co-director Yoshihiro Nishimura is a former makeup effects artist who co-directed Vampire Girl vs Frankenstein Girl and solo directed Tokyo Gore Police, Speakerman: The Boo (2004), Helldriver (2010), Ninja Torkage (2014) and episodes of The ABCs of Death and The Profane Exhibit (2013). The third director Tak Sakaguchi has had more of a career as an actor in efforts such as Versus (2000), Alive (2002), Aragami (2003), Battlefield Baseball (2003) and Tokyo Gore Police. Sakaguchi has also started a modest directing career with the likes of Be a Man! Samurai School (2008), Yoroi: Samurai Zombie (2008) and Yakuza Weapon (2011).

The insanity that is Mutant Girls Squad kicks in from the opening montage that places the three girls in stylised comic-book panel poses up against a giant moon that fills most of the sky and a blood-splattered flag. They go into action amid copious splatter effects with swords cleaving heads in two, heads ripped right off, others heads swelling up and causing brains to pop out, while one of the girls does the old Wonder Woman trick of deflecting a spray of bullets using her wrist bracelets.

After a few inconsequential scenes with Yumi Sugimoto at school, we get the wonderfully demented scenes with her father revealing he has nipples and a dick made up on tiny mewling faces, followed by security forces armed with helmets that have guns mounted in the centre of the forehead bursting in and Yumi erupting into combat in the tiny living room, as all the while the father’s severed head directs action from the sideline.

This segues into an astonishingly high-energy sequence with Yumi Sugimoto running out into the neighbourhood and slaughtering everyone she comes across with her claw – a demented bloodbath with combatants beheaded, jabbed through with swords, faces sliced in tripartite sections, hearts ripped out, even a woman baker carved up into a baguette. The sequence goes on for nearly ten minutes and the sheer energy of it leaves you exhausted afterwards.

In section 2 (each of the film’s chapters comes from a different director), we are introduced to the other girls. The script never places much effort on explaining what The Hilko are or why an ancient race of mutants should manifest modern technological devices such as chainsaws from their bodies. The girls come with a wacky bizarreness to their conception – one has samurai swords for nipples; another with a chainsaw coming out of her ass (the scenes with her having to back into combat to fight are hilarious); another with a face for a stomach; another with tiny arms poking out of her head, which later detach as another creature. Suzuka Morita has a snout for a mouth and the ability to kiss someone and suck out their innards. Many of these creature effects are not too convincing – like the digital effects of Suzuka Morita’s snout and tentacles or the breast swords that wobble when the girl moves. None of this seems to concern the film, which makes all effort to play everything as ridiculous as possible.

Mutant Girls Squad reaches its most entertaining during the climactic bloodbath during which the screen is literally drenched in massive jets of arterial spray. There is the complete insanity of watching the girls fight, Suzuka Morita with her tentacles going up against the girl waggling a chainsaw out of her ass, or Yumi Sugimoto up against a wrist cutter who releases bursts of energy every time she slices her skin and cuts off her feet and hands to send after Yumi on jets of energy. (During the climactic finale, the cutter is repurposed as a flying platform for the other to ride into combat atop as she flies through the air on jets of energy from her stumps). The villainous Kisiragi (co-director Tak Sakaguchi) turns into a monster twenty feet tall with massive wedge-shaped blades for arms, a dick/sword that spills blood over one of the girls, while his head is cushioned by two giant tits that spray acidic milk.