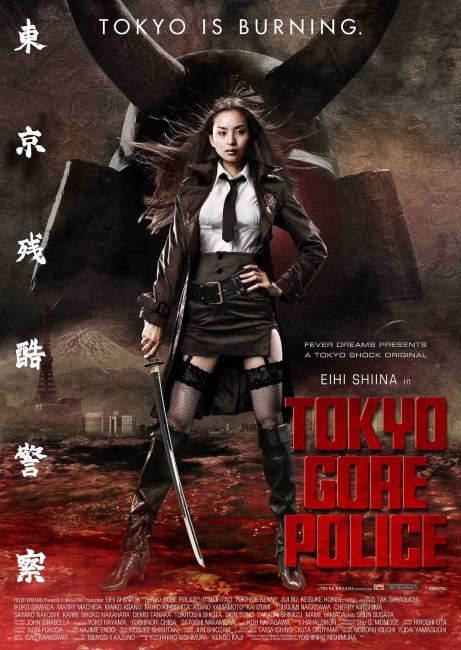 In the near future, the Tokyo police force has become privatised as the Tokyo Police Corporation. Ruka Yoshioka is one of the officers on the force. The biggest threat they have to deal with is Engineers – people who conduct bio-mechanoid body modifications that are causing them to become berserk killers. Ruka must deal with a new threat of Keyman, an Engineer who is forcibly converting people. Doing so, holds secrets about her own past.

Director Yoshihiro Nishimura had previously worked as a makeup effects artist on films such as Suicide Club (2002), Death Train (2004), Noriko’s Dinner Table (2005), Strange Circus (2005), Exte: Hair Extensions (2007) and other efforts amid the gonzo splatter cycle like Meatball Machine, Machine Girl, Robo-Geisha and Samurai Princess. Nishimura made his directorial debut with Anatomia Extinction (1995), a 54-minute long version of what he would remake and elaborate out as Tokyo Gore Police here. Nishimura is co-director on other gonzo splatter films such as Vampire Girl vs Frankenstein Girl (2009) and Mutant Girls Squad (2010). On his own, he has made Speakerman: The Boo (2004), Helldriver (2010), Ninja Torkage (2014), the Z is for Zetsumetsu segment of The ABCs of Death (2012) and the Hell Chef episode of The Profane Exhibit (2013).

Aside from Vampire Girl vs Frankenstein Girl, Tokyo Gore Police is arguably the most well known of the gonzo Japanese splatter films, although is perhaps not the best of these. In it, Yoshio Nishimura has stripped everything away until the entire film serves as nothing more than a vehicle for his outlandishly wacky splatter effects. This is immediately apparent from the opening scene where the film launches into a sentimental tribute for what a good cop the heroine’s father is and we see him smilingly saluting the camera before his head erupts in a gout of cartoonish splatter.

In the first proper scene, we are introduced to heroine Eihi Shiina – the very strange love interest from Takashi Miike’s Audition (1999) and appearing no less strange here – as she goes into action against a rampaging Engineer with a chainsaw forearm attachment that it is using to cut the heads off cops atop a building. She enters the fray by picking up a rocket launcher, firing it against the pavement and riding the thrust up to the top of the building to enter the combat wielding a samurai sword amid much in the way of poses and finally cleave the Engineer in two.

There are all manner of wildly surreal makeup effects sequences. Eihi Shiina is pursued by a man who peels his head off to reveal an exposed brain with two eyeball stalks poking out who then starts firing pieces of brain at her. One of the satiric commercials for police recruitment has kids playing soccer with a severed head for a ball. The superintendent goes into battle with his dick transformed into a giant organic cannon. A woman in a kimono engages a schoolgirl who has a biomechanoid sword arm in a swordfight – when her sword arm is hacked off, the schoolgirl sprays green acid from her tits that melts the other woman to the skeleton.

There is a visit to a fetish club peopled by such bizarre sights as a girl with scars for nipples, one with eyeballs on the end of glass stalks, a living chair that urinates from a stage all over the crowd below, before a man goes off with a girl who bites off his dick during a blowjob. During a fight in a hallway, the nipple scar girl has her ankles severed whereupon her legs turn into a giant set of jaws that start trying to devour the detective before he places his severed arm inside the jaws and pulls on the tendon with his remaining arm to fire the gun and blow her head off.

In the climactic scenes, Eihi Shiina fights the chief who wields a giant cannon that fires fists at her, which she deals with by using a tendon from her own mutant arm to redirect the fists around back at him, before battling his gimp who has had her arms and legs replaced by sword blades that she scuttles about on, where Eihi promptly severs the feet only for the gimp to fight on on its back.

Yoshio Nishimura seems entirely unconcerned about any plot connecting things together. Some scenes seem entirely random. There is, for instance, one sequence that is unconnected to anything else that happens in the film where Eihi Shiina is on the subway in kimono, hot pants and moon boots and grabs a guy who tries to cop a feel, drags him into a back alley and severs his arms at the wrist with her sword, before with perfectly nonchalant cool popping up an umbrella to walk off under the rain of gore.

What plot Nishimura does have, he has appropriated from RoboCop (1987) with its idea of a private enterprise police force – which the film seems to vaguely agree is a bad thing – and a series of satirical tv commercials in the background. Maybe you could call the film a RoboCop crossbred with a gonzo version of David Cronenberg’s Videodrome (1983). Everything is a played at a frenetic cartoonish level – even the police dispatcher makes announcements to the camera like a tv announcer that are underscored by a dance beat.