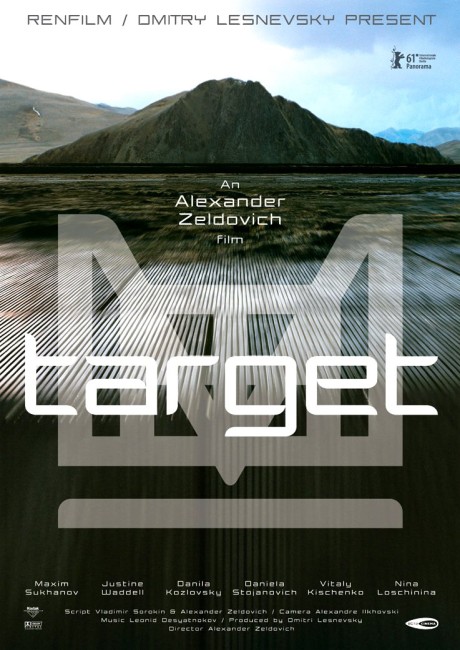 Russia in the year 2020. Five people – Viktor Chelshchev, the Minister of Natural Resources, and his wife Zoya; Nikolai Trefimov, a military pilot who patrols cargo shipments on the road to the Chinese border; popular tv host Mitya Kolesov; and Anna Zivers, who hosts a Chinese language program for beginners – journey from Moscow into the remote countryside. They arrive at a village nicknamed Bombay that is miles from anywhere. They are guided down into Target, an abandoned astrophysical research centre designed to collect cosmic energy. They descend into the heart of the facility and spend the night dosed in the absorbed radiation. This apparently grants longevity, with the locals in the township claiming to be in their sixties, yet looking in their twenties. A local woman Taya begs to join them on the return journey to Moscow. Afterwards, all of them feel rejuvenated and renewed. Zoya begins an affair with Nikolai and eventually leaves Viktor for him. Viktor becomes obsessed with a set of spectacles that can show the moral value of minerals and people. Mitya and Anna embark on a relationship, he confessing that he has shunned others but fell for her through watching the Chinese language program. Taya meanwhile keeps an appointment made twenty years earlier to meet her lover again. However, what they are not aware is that the radiation also has unpredictable effects, causing them to abandon control and do erratic things.

Target is a Russian science-fiction film. Rather than the typically weightily ponderous and message-heavy science-fiction films of the Soviet era – see Aelita (1924), The Heavens Call (1959), Storm Planet (1962), Andromeda Nebula (1967), Moscow-Cassiopeia (1973) – or modern films that hold an allegiance to that era such as Inhabited Island (2008) – Target may be the first science-fiction film to address post-millennial Russian society. It also takes up a topic that a number of science-fiction films of late have done – the quest for youth and beauty as in the likes of Never Let Me Go (2010), Transfer (2010), In Time (2011) and Sufferrosa (2011).

Target seems intended to take in a crosscut of the new Russia – director Alexander Zeldovich has previously made Moscow (2000), which also attempted to depict a near-future Russia. There is the morally ambiguous politician (Maksim Sukhanov – a character that Alexander Zeldovich says he loosely based on Vladimir Putin); the drive for new sources of energy; the new wealth of the post-millennial entrepreneurs; the authoritarian and frequently corrupt state security who act as their own law; the absorption of Western styled culture, including the amusingly satiric notion of a televised political debate staged as a celebrity chef cook-off. This comes amid some very nice production design – modernist apartments and offices, and especially a multi-level piazza in marble that seems to be the size of several airplane hangars.

Target starts with an interesting science-fiction notion. The opening of the film take us on a journey to a remote area, through a strangely deserted township and then down into the bowels of the astrophysical energy-collecting dish on a vast wide-open plane. This is a promising build-up, even though nothing remarkable happens as we keep expecting it to. Thereafter, as the five characters adjust to their newfound rejuvenation, the film gives us cross-sections of their interwoven lives.

Previous films about immortality have charted out a number of themes between them – most common is the picture of a future where the immortals have become bored and/or society has stagnated as in Zardoz (1974) or the Star Trek episode Who Mourns for Adonis? (1967). Or maybe where their condition offers a unique perspective on the rest of the world – as in The Man From Earth (2007) or the Star Trek episode Requiem for Methuselah (1968). Contrary to these, Target peters off and tells the story of how the newly regenerated feel an irrational euphoria, take reassessment their lives and seek to find something new and different.

At this point, Target tapers off from its science-fiction concept and heads off to follow the lives of the reborns. These are interesting up to a point but you question if the film needed a science-fiction device in order to tell these stories – you suspect it would not have taken much to rewrite the stories as taking place in contemporary Russia without the need for the rejuvenation device or a future setting. The most well developed of these is the triangle between politician Maksim Sukhanov, his wife (Justine Waddell) and her affair with a horse-loving colonel (Vitaly Kishchenko) who works the border patrol. This story is the most full-blooded, the best played and reaches a tragic conclusion. Indeed, if this has been the sole story that Target told, I would have rated the film higher.

The other stories are far less satisfying. Maksim Sukhanov’s character spends much time developing a pair of glasses that can detect the good and evil rating of minerals and it would also appear human beings. I was not sure if this was one of the vagueries of the subtitling but this seems a bizarre concept that it would take an extremely small amount of mineralogical fact and logic checking to render nonsensical.

Elsewhere, TV talkshow host Danila Koslovskiy and Chinese language program tutor Daniela Stoyanovich fall in love and he admits a long-time crush on her – but then they decide not to have a relationship. Equally, Nina Loshchinina returns from Bombay with them, does some shopping and not a whole lot else before suddenly revealing her prearranged meeting with her lover from twenty years before, meets him and we never hear anything more from her again. These feel like half-stories and fail to work satisfyingly. In Target giving two-and-a-half hours to telling them, it feels like a film that offers not nearly enough in return for the investment of time that it asks of us.