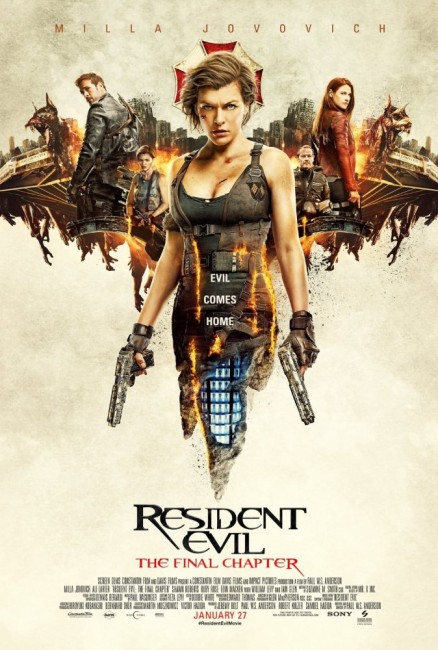 Alice is wandering in the ruins of Washington D.C., fighting off mutant creatures and marauders, when she is contacted by The Red Queen. The Red Queen warns her that the last remaining humans on Earth are about to be wiped out. In The Hive there is located an antidote that will kill everything that is infected with the T-virus. Alice has 48 hours to return to Raccoon City and retrieve it. Alice sets out, only to be recaptured by Dr Isaacs and tied up and made to run behind the tank he commands to act as bait to draw a zombie horde behind him as he heads to Raccoon City. Alice makes an escape and joins a group of survivors in a tower in the ruins as they face off Isaacs’ zombie horde. Abandoning the tower, Alice leads the survivors down into The Hive, making the way past its death traps to the confrontation with The Red Queen who holds the secrets of Alice’s past and how the T-virus was created.

The Resident Evil films are made for fourteen year old boys whose idea of drama is endless hours spent gaming in their parents’ basement. They exist as a combination of zombies, mutant creatures and action sequences presided over by Milla Jovovich in a series of kickass poses. They are films that run independent of normal considerations like plotting where it doesn’t seem to matter what happens. As is the case here, characters that have been killed off in prior chapters are back and their deaths dismissed with the excuse of being it was clones that were killed. Meanwhile, The Red Queen, which was responsible for mass slaughter in previous films, is now flipped to become an ally of Alice.

The only thing that propels the films is the kinesis of each succeeding action scene. Any of these sequences in any of the films could be placed in random order and it make no difference to the plotting. The world that the series exists in feels like one that Paul W.S. Anderson and associates have made up from one action sequence to the next. Each of the earlier sequels, for instance, would end on a cliffhanger that the subsequent film would then have to try and find some reason to rationalise.

I sat down to watch Resident Evil: The Final Chapter with all the enthusiasm of a trip to the dentist. I sat through the first half-hour of the film watching the random action sequences – Milla Jovovich fighting off a large flying pterodactyl-like creature as she flees in a Humvee and eliminating it with a claymore mine she conveniently finds in the back; despatching a group of marauders while strung upside down from a bridge strut by one leg; captured by a still alive Iain Glen and forced to run along behind his tank as bait to draw a massive horde of CGI zombies. None of these scenes did anything for me and I was fighting a massive sense of ennui when quite unexpectedly Resident Evil: The Final Chapter started to work.

Here Paul W.S. Anderson seems to be putting all of his directorial skill into delivering some kick-ass action sequences. One’s attention is captured when it comes to the siege of the tower with the furious fight to shut the gate before the zombie horde break in, Milla ziplining down into the midst of the zombie mass to engage in hand-to-hand combat and the visually epic scene where the defenders pour burning oil down the sides of the tower and ignite the zombies en masse. After a ho-hum scene being pursued by mutant dogs, the scenes venturing down into The Hive act both as a reprise of scenes from the first film and the opportunity for Anderson to remake them with a much more charged thrust. Anderson gets in some fine sequences with the team having to navigate through the fins of a giant turbine, having to negotiate the laser grid, and a fight between Milla and Iain Glen in the midst of a laser grid corridor and on an elevator.

The only drawback to some of the action scenes is the pace of the editing, which goes so fast it is impossible to tell what is going on. One gets that Anderson and co wanted to make the film proceed at a frenetic tempo but as some point it would be nice to be able to appreciate each scene for what is happening. The story is also much stronger this time – or at least one that pulls back to provide a satisfying rationale that ties everything that has happened together. Even though you know that the subtitle The Final Chapter is a lie, it does bring the series to a satisfying conclusion.