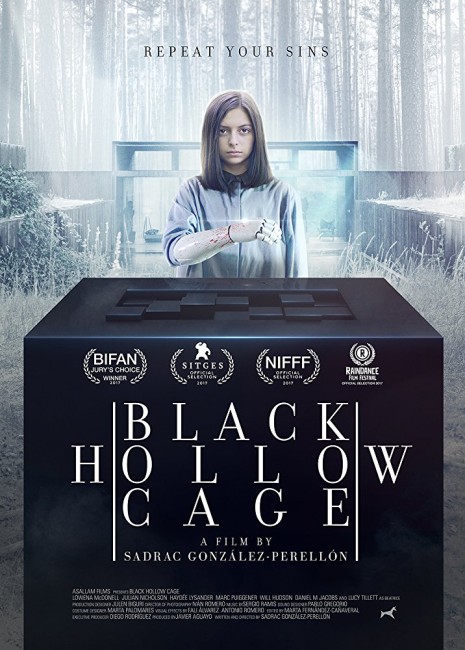 Alice and her father Adam live alone in a house in the woods. Alice is given a prosthetic right arm to replace the one she lost in an accident but struggles to use it. Her mother died in an accident and Alice is insistent that her dog Beatrice, who is able to speak with an electronic voicebox, is her mother. Alice then discovers a mysterious black cube in the woods. When she touches it, it opens a panel and she finds a note that says ‘they must not be trusted’, which she discovers to be in her own handwriting. Her father then finds Erika and her younger brother Paul in the woods, Erika having been badly beaten by an abusive boyfriend. Adam brings them back and agrees to let them stay. However, Alice then finds an audio recording inside the black cube, which predicts things before they occur and urges her to kill Erika and Paul before something terrible happens.

Black Hollow Cage was the third film for Spanish director Sadrac Gonzalez-Perellon who had previously made Myra Has Gone (2009), a non-genre film about illegal immigrants, and The Vampire in the Hole (2010), a vampire purportedly made for only one dollar. The film, shot in Spain in English language, played at a number of major festivals around the world.

The film strikes a tone of fascinating enigma right from the outset. In the opening scene, we see Julian Nicholson, who we later find is the father, being attacked by a black hooded intruder sneaking up from behind. However, he is alive again in the subsequent scene, leaving us puzzled about whether we just saw a flashback or what. We are then introduced to young Lowena McDonell as the doctor (Daniel M. Jacobs) sets up three rods of differing thickness and colour on the table and we watch as he fits her with a prosthetic arm and see her frustration as she fails get it to pick the rods up.

Lowena also has a pet dog that talks with an electronic voicebox that would appear to be able to actualise its thoughts – she also has the bewildering habit of referring to the dog as her mother. She takes the dog for a walk in the woods and comes across a large black cube maybe around five feet on a side. After touching the cube, its’ featureless surface opens and she places her hand in and retrieves a note that tells her not to trust ‘them’. Back home, she writes out the phrase and finds that the handwriting is identical to her own and even from the same pen she just used.

From this point, one’s mind is seriously starting to boggle and wondering what is going on. Things then proceed to get even more enigmatic. This is aided considerably by Sadrac Gonzalez-Perellon’s direction that stands at an oblique distance and often seems to consist of long shots or periods of silence. The setting of the house is also fascinating –from one angle it looks like a series of metal plates arranged in a row in the woods, from another is a regular open plan home centred around a den area that has an open face out onto a swimming pool

After this, we are introduced to the brother and sister, apparently attacked in the woods and brought home by the father. Lowena McDonell then returns to the black cube, which gives her an audio file, telling her to play it only at 4pm. She does so whereupon it gives her a detailed set of instructions about getting her father out of the house on a pretext and then luring the boy (Marc Puggener) to the kitchen. Even more bafflingly, the voice on the recording seems to know what is about to happen before it does. There comes an abrupt shock when the voice tells Lowena to kill the boy, adding urgent warnings that terrible things will happen if she does not. She picks up a kitchen knife and goes to stab him but instead he comes up and kisses her and her decision falters.

Things then become even more baffling. [PLOT SPOILERS HENCEFORTH] The household go to bed but the girl (Haydee Lysander) gets up and goes naked into father Julian Nicholson’s room, luring him to follow her. The boy has let the black masked stranger into the house who comes up behind and slits the father’s throat (just like in the opening scene). What makes the scene all the more effective is that it is a silent drama that takes place all in wide angle as people walk through the rooms of the house. It is at this point that – well over halfway through the film – you start to realise that you are watching a time paradox film, something like a much more enigmatic and mysterious version of fellow Spaniard Nacho Vigalondo’s Timecrimes (2007), albeit one that leaves a whole lot of questions unanswered – like where the black cube came from.

The final act is the most cryptic of them all in which Lowena McDonell places herself in the cube. We next get a replay of the scene with Lowena following the instructions on the audio tape before a double of herself appears, guides her other self into one room and takes over to stab the boy, only for her to be stabbed by the sister Haydee Lysander and collapse dying. Her other self comes out and this is followed by a further replay of the opening scene in which the father is attacked and killed by the black hooded figure, only for the attacker to pull the mask off and reveal it is a double of the father. The final cryptic scene would appear to be Julian Nicholson giving Lowena McDonell instructions to use the cube to go back and prevent the accident that is central to everything that has happened.