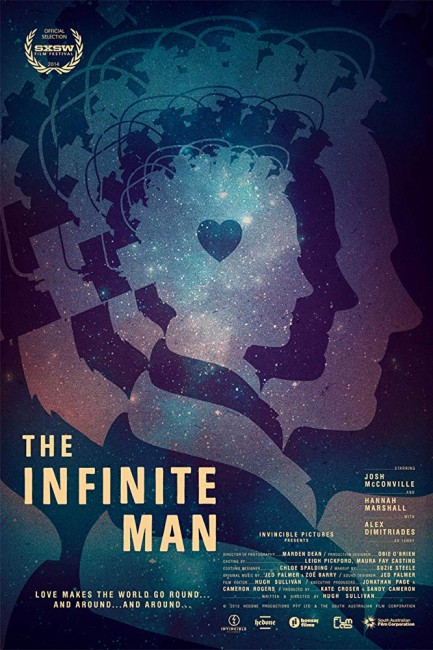 For their anniversary, Dean takes his girlfriend Lana to the motel they went to the previous year where he has mapped everything out in exacting detail in order to replicate the perfect weekend they had last time. They arrive to discover the motel where they stayed to now be an abandoned ruin. She becomes fed up with his obsession with schedules and detail and walks out after her boorish ex Terry arrives, having followed them. One year later, Dean has spent the time perfecting his invention of a time travel helmet in the hope of going back and changing the outcome of the weekend. He calls Lana and she turns up where he persuades her to come back with him. As they duck in and around the previous events, things start to go wrong. Next, Dean is visited from another version of himself from one year into the future who tells him that he did get Lana while the present he did not. With all of the various versions of Dean, Lana and even Terry running about, things start to go out of control.

The Infinite Man is a directorial debut for Australian director Hugh Sullivan who had previously made a handful of short films. The film gained some very favourable notice on its rounds of film festivals.

The film is a variation on the causally looped time paradox that we saw in films such as Terry Gilliam’s Twelve Monkeys (1995) and Back to the Future Part II (1989), which staged an entire film hidden in the margins of its predecessor. You could even point to the more obscure Australian time travel film As Time Goes By (1988), which similarly featured a man running around a nowhere Australian outback town trying to sort out various time conundrums.

The work that did this to brilliance and the one that comes the closest to what we have in The Infinite Man was Nacho Vigalondo’s Timecrimes (2007), which constructed an extraordinary story about causal loops that occur as an ordinary man’s ventures into the woods involves him having to travel back in time and continually meet himself to stop a chain of events from happening. There are also surprising similarities to another Australian-made time paradox film that came out around the same time, the Spierig Brothers’ more high-profile Predestination (2014), while this period also seemed to feature several other works on the same subject with the subsequent Synchronicity (2015), Counter Clockwise (2016), Paradox (2016), Black Hollow Cage (2017) and In the Light of the Moon (2019).

Out of the premise, Hugh Sullivan creates an amazing work. Initially, things play out in a mundane way in which nerdish Josh McConville (a dead ringer for actor Lee Pace) takes his girlfriend Hannah Marshall to an abandoned hotel for their anniversary, where their plans go wrong with the arrival of her ex Alex Dimitrades and she decides to depart with him, leaving Josh heartbroken. This is played with some comic amusement but then the film starts to get interesting as Hugh Sullivan puts twists on it and jumps forward one year later as Josh McConville perfects his time travel device and makes the trip back with Hannah Marshall.

As things start to go wrong, we find out that the initial account of events that we saw transpire is anything but straightforward as their time-travelled selves keep walking in and being mistaken for their other selves. As then becomes apparent, there are yet further versions of Josh McConville travelled from the future and we then see all of the events replay themselves as the other two versions of themselves hide in the shadows, or are mistaken for other versions and even forced to impersonate themselves and maintain causality by having their earlier lines fed to them through an earpiece.

The script twists and constantly loops over on itself like a mad pretzel-maker’s worst nightmare, always maintaining the perfect logic and never seeming to contradict its own causal continuity. The results come with an enormous pleasure in the film’s wilful conundrums.

You can only admire Hugh Sullivan for making such an ambitious work for his first film. He has clearly cut costs by shooting at only a single location – that of an abandoned motel and its forecourt – and using a cast of only three people. You have to have equal admiration for his cast who must surely have had to take aspirin on an industrial scale in order to work out which versions of themselves they were meant to be at any point in the script.

The film later underwent a Spanish remake as Peaches (2017).

(Winner for Best Original Screenplay at this site’s Best of 2014 Awards).