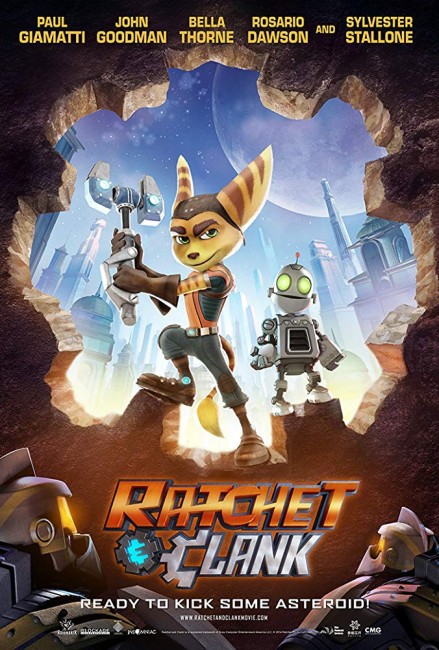 Drek, the chairman of Drek Industries, has perfected the Deplanetizer and is destroying planets all across the galaxy in order to collect sections of them to make his own perfect world. On the backwater planet Veldin, the Lombrax mechanic Ratchet learns that the Galactic Rangers are coming to town to recruit a new member. It is his long held dream to join the Galactic Rangers and he applies, only to be rejected by the self-important Captain Qwark. Drek meanwhile starts building an army of killer robot to destroy the Rangers. A small service robot is accidentally imprinted with Drek’s battle plans. As the controllers seek to destroy it, the robot flees in a pod and comes down on Veldin where it is found by Ratchet who adopts it, naming it Clank. Clank warns of Drek’s plot to kill the Rangers and so he and Ratchet fly in to save them from the attack. With Ratchet hailed as a hero, Qwark is forced to announce him as the new member of the Rangers. As the Rangers set out to stop Drek from targeting the next inhabited world, Drek instead decides to appeal to Qwark’s ego and turn him against the rest of the group.

Ratchet & Clank is a videogame series that was created for the Playstation. The first game Ratchet & Clank (2002) was popular and has spawned over a dozen spinoffs and follow-ups to date. The games always follow the Lombrax mechanic Ratchet and his robot sidekick Clank. The various adventures takes place across a galaxy peopled by a variety of exotic alien creatures and seem to involve the employment of increasingly more outlandish weapons and gadgets.

The film version of Ratchet & Clank has been produced by the Vancouver-based Rainmaker Entertainment. Rainmaker started as a visual effects studio producing effects for the likes of Stargate SG-1 (1997-2007), I, Robot (2004), Elektra (2005), The Da Vinci Code (2006) and Night at the Museum (2006), among others. In 2007, Rainmaker incorporated with what was previously known as Mainframe Entertainment, the world’s first computer animation company, who had produced tv series such as ReBoot (1994-2001), Beast Wars: Transformers (1996-9) and a great many Barbie films for dvd release. Rainmaker made their first theatrical release with Escape from Planet Earth (2013), although this proved a critical flop and did middling box-office.

The film version of Ratchet & Clank feels like something that has been made principally for the Under Tens age group. The film is all slapstick sequences, frenetic visual eye candy, easily identifiable villain figures and small and easy identification hero figures. To its credit, the backgrounds are well designed and once the main story kicks in, the action engages in a colourful fast-paced way. I certainly enjoyed it far more than the empty-headed Escape from Planet Earth, although in terms of instant disposability the film rates only around the same as Rainmaker’s Barbie films.

It also becomes a surprise how much of the film is drawn from the Star Wars universe. If anything, you could say that what you have up on the screen is the equivalent of the Star Wars prequels retooled for the single digit age set. A surprising amount of the plot owes allegiance to Star Wars (1977) – a planet-destroying doomsday weapon; the small robot with key information about the weakness in the planet destroyer who makes a getaway in an escape pod and comes down on a desert planet; a naive youth creature living in a galactic backwater with dreams of going off to join the big fight who finally gets to do so after said key information accidentally falls into his lap via the robot. The pompously self-important Captain Qwark gives the strong impression that he has been modelled on the appearance and voicing of the title superhero in The Tick (1994-7).

Ratchet & Clank is directed by Kevin Munroe, a Canadian animator and comic-book artist who made his directorial debut with the animated Teenage Mutant Ninja Turtles film TMNT (2007) and then went on to make the live-action Dylan Dog: Dead of Night (2010). Subsequent to this, Munroe made the animated Troll: The Tale of a Tail (2018)