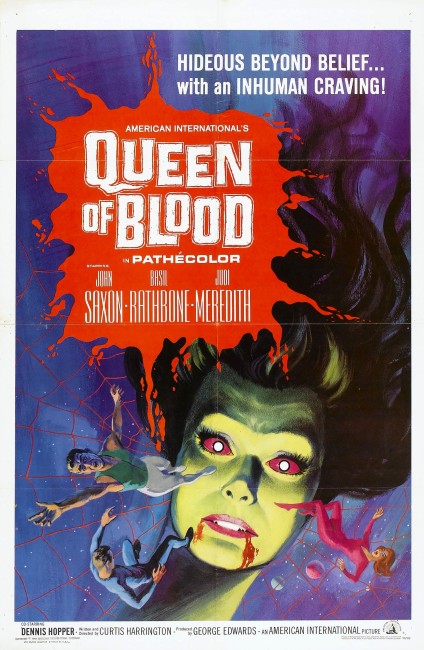 aka Planet of Blood

The year 1990. The Interplanetary Space Foundation receives a distress call from an alien ship crashlanded on Mars’s moon Phobos and launches a rescue ship to investigate. On Phobos, the crew find an escape pod containing a green-skinned humanoid woman. They take her back to Earth with them, only to then discover that she is a vampire who gains her sustenance by preying on blood.

In the 1960s, American International Pictures and producer Roger Corman gave us the practice of buying up Russian science-fiction films and writing new films around the special effects footage from them (the Soviet films of the era often having special effects far superior to those in most American films). Roger Corman pioneered the process with the Francis Ford Coppola-directed Battle Beyond the Sun (1963), which took its footage from the same source as this – Niebo Zowiet/The Heavens Call (1959). There were also the Prehistoric Planet films – Voyage to the Prehistoric Planet (1965), which was also directed by Curtis Harrington, and Voyage to the Planet of Prehistoric Women (1968), which were filched from the same Russian film Planeta Bur/Storm Planet (1962). [Indeed, all of Basil Rathbone’s scenes here were reportedly filmed by Curtis Harrington at the same time and on the same set as his scenes for Voyage to the Prehistoric Planet].

Queen of Blood is the best out of these re-edited Russian films. This probably due to the fact that, more than the other films, it largely creates its own film and uses the Russian film footage for only occasional special effects shots in the background. A good part of this is also due to the fact that it is directed by Curtis Harrington, later to become a director of a series of modestly effective psycho-thrillers (see below for Harrington’s other genre films).

The Russian films were made on much more lavish budgets that the AIP knockoffs and the stock footage from them here looks great – beautiful unworldly interiors of alien ships, Mars filling the bulk of the sky and the rockets going into orbit and landing. The early scenes are a little dramatically hesitant but once Queen of Blood settles down into horror mode, the film gains impetus. Curtis Harrington constantly aims for an atmosphere of otherworldly weirdness.

The film is considerably aided by the spookily unearthly presence of the green-skinned Florence Marly. There is a considerable jolt to the scene where Marly turns into the camera from drinking from Dennis Hopper with her eyes glowing and an incredibly eerie scene where she advances on Robert Boon, appearing and suddenly vanishing in a darkened corridor. Vilis Lapenieks’s gaudy Technicolour photography exploits Florence Marly’s green skin makeup job for all it can.

Queen of Blood probably drew much of it inspiration from the B movie classic It! The Terror from Beyond Space (1958), which also featured a Martian vampire creature hunting the crew of a ship. There is also much resemblance between Queen of Blood and the later Alien (1979) – both films feature a spaceship crew lured to a crashed ship by a distress signal where they unwittingly bring back on board an alien that proceeds to polish them off one by one. The alien here also lays eggs and there is a burial in space scene that resembles the similar scene in Alien.