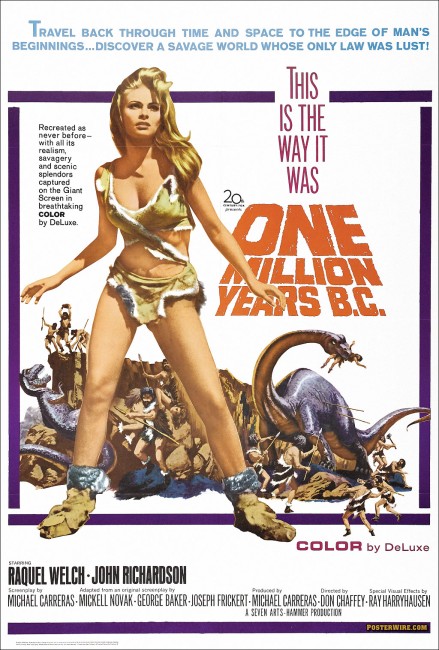 Among the prehistoric Rock Tribe, Tumak, son of the chief Akhoba, kills a wild animal. However, when Tumak tries to take his share of the food, Akhoba callously beats him and then kicks him off a clifftop. Tumak survives and sets out on his own. Collapsing from exhaustion, he is found by Loana of the Shell Tribe. Tumak is impressed by the Shell People’s more advanced practices, including cave painting, spear fishing and the use of shells as plates. Driven out by the Shell People, he and Loana try to survive together in the wilderness. There they have to deal with dinosaurs as well as Tumak’s jealous brother who has killed their father and usurped leadership of the Rock Tribe.

During the late 1950s/1960s, Hammer Films had great success – indeed had built their reputation on – remaking a host of classic horror stories, including The Curse of Frankenstein (1957), Dracula/The Horror of Dracula (1958), The Mummy (1959), The Two Faces of Dr Jekyll (1960) and The Phantom of the Opera (1962). Hammer’s final remake was this rehash of the creaky old caveman-vs-dinosaurs effort One Million B.C. (1940). The original One Million B.C. is interesting in many ways but not a particularly memorable effort – it mostly being seen today as stock footage rehashed in even cheaper films.

Hammer billed One Million Years B.C. as their 100th film. It was made in collaboration with Ray Harryhausen, the cult American stop-motion animator responsible for the likes of The Beast from 20,000 Fathoms (1953), The 7th Voyage of Sinbad (1958) and Jason and the Argonauts (1963), among others. (See below for Ray Harryhausen’s other films).

What decisively makes One Million Years B.C. the best of the caveman vs dinosaur films is Ray Harryhausen’s superb animation effects. Harryhausen had polished his art to perfection by the point he made One Million Years B.C. and there are some excellent scenes fighting off a giant turtle, where John Richardson impales a two-legged dinosaur on a spear or during Raquel Welch’s abduction by pterodactyl. The standout set-piece is the enthralling battle between the Tyrannosaurus Rex and the stegosaurus, which Ray Harryhausen animates even down to tiny details showing the T-Rex panting as it expires.

The filmmakers appear to have gone and shot on genuine volcanic locations. The colour photography is remarkably rich and florid. Acting is hardly a consideration here, although Robert Brown gives an effectively brutal performance – one where Brown is almost unrecognizable from his recurring role as the starchy M in the James Bond series. It may say something about One Million Years B.C.‘s classic stature that the same plot (of a primitive man falling in love with a girl from a more advanced tribe) was more or less repeated in Quest for Fire (1981), a film that attempted to rewrite cavemen dramas with more accurate anthropological realism.

The success of One Million Years B.C. inspired Hammer to create a mini-spate of prehistoric films and this was followed by the likes of Slave Girls/Prehistoric Women (1967), When Dinosaurs Ruled the Earth (1970) and Creatures the World Forgot (1971).

Ray Harryhausen’s other films are: The Beast from 20,000 Fathoms (1953), the granddaddy of all atomic monster films; the giant atomic octopus film It Came from Beneath the Sea (1955); the alien invader film Earth Vs. The Flying Saucers (1956); the alien monster film 20 Million Miles to Earth (1957); the classic Arabian Nights fantasy The 7th Voyage of Sinbad; The 3 Worlds of Gulliver (1960); the Jules Verne adaptation Mysterious Island (1961); the Greek myth adventure Jason and the Argonauts (1963); the H.G. Wells adaptation The First Men in the Moon (1964); the dinosaur film The Valley of Gwangi (1969); the two Sinbad sequels The Golden Voyage of Sinbad (1973) and Sinbad and the Eye of the Tiger (1977); and the Greek myth adventure Clash of the Titans (1981).

Don Chaffey was a director who made a handful of films during the Anglo-horror cycle, including several others for Hammer’s exotica cycle with The Viking Queen (1967) and Creatures the World Forgot (1971). Elsewhere, Chaffey directed Ray Harryhausen’s Jason and the Argonauts (1963) and the psycho-thriller Persecution/The Terror of Sheba (1974). In the 1970s, Chaffey moved over to work in US television and also made several children’s films with Disney’s Pete’s Dragon (1977) and the Hanna-Barbera film C.H.O.M.P.S. (1979).