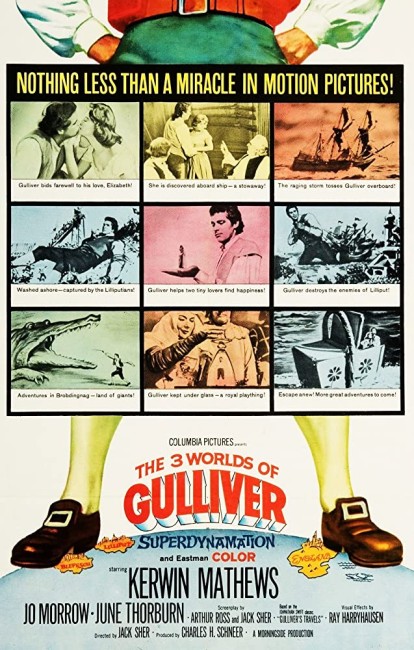 In 1699, Lemuel Gulliver takes a job at sea because he cannot earn enough money as a doctor. His fiancée Elizabeth stows away with him. Gulliver is then washed away during a storm. He comes around to find himself in the land of Lilliput where he is a giant compared to the tiny Lilliputians. He is seen as a pawn in the Emperor’s war with the neighbouring country Blefuscu, which is being fought over whether people should cut open their eggs from the top or the bottom. Gulliver then sails on to the land of Brobdingnag where he is now tiny and the natives are giants. There he is reunited with Elizabeth and both become a source of fascination to the royal court. However, the advisor Makovan then seeks to have Gulliver tried as a witch.

The 3 Worlds of Gulliver was the second English-language film made of Jonathan Swift’s Gulliver’s Travels (1726). The film reiterates the popular misapprehension that Jonathan Swift wrote the original as a children’s book. Swift’s original story is filled with biting satire and an often bawdy writing style. This version plays it as a simple fabulist adventure where the hero is alternately a giant and then a little person.

Like most other film versions, The 3 Worlds of Gulliver also only tells half the Jonathan Swift book. The book comprises of five journeys – the well known ventures through the lands of Lilliput and Brobdingnag but in most filmed versions the other two sections, the journeys to the floating island of Laputa, inhabited by scientists, and the lands of the Houyhnhnms, inhabited by intelligent horses, are usually thrown out.

The 3 Worlds of Gulliver was made by cult stop motion animator Ray Harryhausen and his producer Charles H. Schneer, who had both just come from the enormous success of The 7th Voyage of Sinbad (1958). They cast the story as the same type of Cinemascope epic that The 7th Voyage of Sinbad was. (See below for Ray Harryhausen’s other films). Kerwin Mathews, who was also Sinbad in 7th Voyage, is miscast as Gulliver – he is all wooden heroics whereas Gulliver is a role that requires more in the way of intellectual prowess

Unfortunately, the Swiftian satire does not sit at ease with this. Nevertheless, despite being scaling up as a big screen adventure, the film allows some of Jonathan Swift’s social absurdities to show through. The pomposities of the Lilliputians and the Brobdingnagians do come across with a certain jolly amusement. At its worst – as in the scenes with the Lilliputian ministers – The 3 Worlds of Gulliver descends to clumsy lowbrow clowning, but these are not too many.

Director Jack Sher had previously made three romantic/dramas with Four Girls in Town (1957), Kathy O’ (1958) and the Western The Wild and the Innocent (1959) and one subsequent film with the musical Love in a Goldfish Bowl (1961). He had far more credits as a writer, particularly in television, although his only other genre credit was as the creator of the short-lived tv series Holmes and Yoyo (1976-7) about a cop and his android partner.