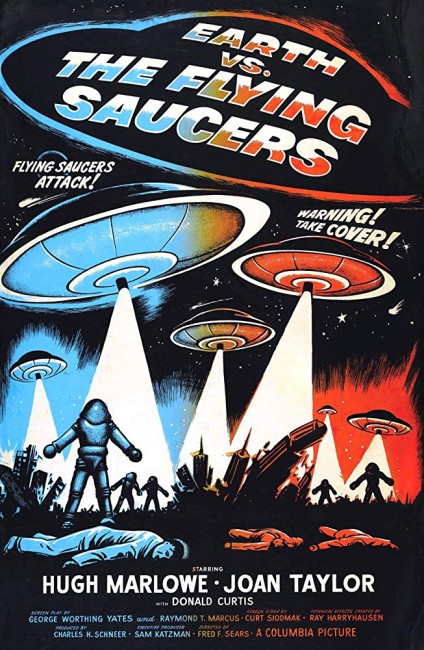 aka Invasion of the Flying Saucers

Scientist Russell Marvin and his newlywed wife Joan are driving through a military test area when they are buzzed by a flying saucer. The next day, saucers appear during a rocket launch and destroy the rocket and entire launch complex. All weaponry is brought to bear against the saucers but makes no dent in their forcefields. As the power inside the decimated control centre fades, the speed Marvin is playing his tape recorder back at slows and he finds a message left, asking him to contact the aliens on a certain radio frequency. Against military orders, Marvin contacts the aliens and is taken aboard their saucer. There the aliens tell him that their own world has been depleted of resources and that they now want the Earth. They give humanity 72 days to surrender. Returning, Marvin labours to build a ray projector that will negate the magnetic fields that protect the saucers and allow them to be destroyed with ultrasonic sound.

Earth vs the Flying Saucers is almost an archetypal 1950s alien invasion film. It owes more than a little to the success of The War of the Worlds (1953), which came out three years earlier. However, where George Pal merely updated H.G. Wells’s Victorian novel to the present-day, Earth vs the Flying Saucers taps directly into the flying saucer scare that was gripping the American nation at the time and which can be clearly said to be behind a great deal of 1950s alien invader cinema. (Indeed, the climactic scenes of the film with the saucers amok in the capital was almost certainly drawn from a high-profile series of flying saucer sightings in Washington D.C. in July 1952).

Earth vs the Flying Saucers directly credits its source of inspiration as Flying Saucers from Outer Space (1953), the non-fiction book by Donald E. Keyhoe, the US Air Force officer and journalist who was one of the earliest to write about the UFO phenomenon and in 1957 became the director of NICAP, the US government organisation formed to study the flying saucer phenomenon. Earth vs the Flying Saucers interestingly also sits on a borderline between The War of the Worlds and the more peaceful overtures of the alien visitor that came in The Day the Earth Stood Still (1951). The aliens are initially friendly but the film quickly abandons this, as almost every alien contact film that succeeded The War of the Worlds preferred to do, and plunges into uncompromising all-out war.

Earth vs the Flying Saucers was made by cult stop-motion animator Ray Harryhausen and his long time producing partner Charles H. Schneer. Ray Harryhausen had earlier made The Beast from 20,000 Fathoms (1953), which had started off the atomic monster genre that competed heavily with the alien invader genre to be the most prevalent theme in 1950s science-fiction. Throughout the 1950s, Harryhausen vied between either theme, making atomic monster films like The Beast from 20,000 Fathoms and the giant octopus effort It Came from Beneath the Sea (1955), and alien invader films such as this and 20 Million Miles to Earth (1957). In 1958, Harryhausen made the highly successful The 7th Voyage of Sinbad (1958), which took his career off in fantasy directions. (See below for Ray Harryhausen’s other films).

All of Ray Harryhausen’s films, however, be they science-fiction or fantasy, are construed as special effects vehicles set around Harryhausen’s provision of monsters. Here the monsters that Harryhausen provides are flying saucers and aliens. The effects work with the saucers buzzing around, accompanied by their shimmering force-fields and tiny pinpricks of explosions bouncing off them, and the blank-suited aliens, blowing up rockets and melting soldiers, are superlative. Harryhausen has done some clever cost-cutting by matting the saucers over the top of stock footage of Navy and Air Force destroyers and bombers. While most stock footage looks just like that, here it is a move that works surprisingly well in the film’s favour.

The connecting theme that runs through all of Ray Harryhausen’s aforementioned atomic monster and alien invader films of this era is that of the various menaces of the show attacking famous landmarks – the rhedosaurus in The Beast from 20,000 Fathoms rampaging through New York City and tearing down Coney Island, the octopus in It Came from Beneath the Sea attacking the Golden Gate Bridge, and the Ymir in 20 Million Miles to Earth meeting its end at the Coliseum in Rome. However, Harryhausen’s vandalistic fantasies reached their absolute apotheosis in Earth vs the Flying Saucers with the military shooting down the saucers over Washington D.C. and in seeing them going crashing into the Washington Monument and impaling themselves in the side of the Capitol Building. There is something sensational in watching such destructive spleandour.

Part of the fun to be had with Earth vs the Flying Saucers is the inventivity that has gone into the script (which comes partly from prolific B-movie hack Curt Siodmak). It comes packed with all sorts of novel inventions and devices – forcefields, room-sized computers, a device that indexes all the information inside a human head, the aliens in their blank metal suits with helmets that are revealed to operate by amplifying the senses, rayguns and flashing Van Der Graaf accelerators, even a muddled suggestion of relativity theory at one point.

Director Fred F. Sears was a prolific director of Westerns and crime dramas. His other genre contributions included the serial Blackhawk (1952) based on the comic strip, the radioactive werewolf film The Werewolf (1956), The Giant Claw (1957) about a giant alien bird and The Night the World Exploded (1957).