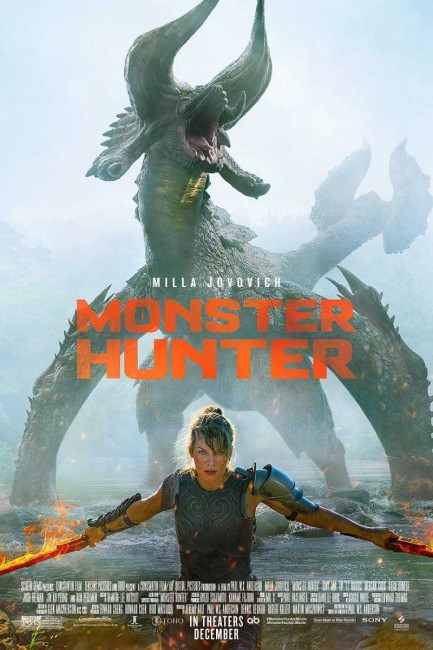 In Afghanistan, Captain Natalie Artemis commands a squad of US Rangers in search of another team that has gone missing in the desert. A mysterious storm engulfs them and causes a series of pillars to flash with energy. The squad find themselves transported into another desert realm where they come under attack by vast, hulking monsters. Most of the squad are wiped out in short course. The sole survivor, Artemis is forced to team with a hunter who etches out a precarious survival living in the caves. Together the two of them improvise a series of weapons and defences against the monsters.

Monster Hunter is a videogame franchise. The series began with Monster Hunter (2004) from the Japanese videogame company Capcom, who also created the Street Fighter and Resident Evil franchises. The first two games were popular in the Japanese market but the series did not gain widespread international exposure until the release of Monster Hunter 3 (2009). The series extends to six games by the time of the film’s release. The games take place in a fantasy setting (although Steampunk elements do intrude) where the player character of Hunter is given a mission by villages to kill monsters and in doing so gains points that allow them to power up along the way.

The film version of Monster Hunter abandons much connection to the games. There are assorted monsters taken from the games – the Apceros, the Diablos, the Rathalos, and an appearance from Hunter’s cat companion Palico. Milla Jovovich and Tony Jaa variously get to wield what is called The Great Sword – a bladed weapon that seems about twice as large as they are. And that seems about the sum of the connection other than the characters beating the crap out of massive-sized monsters (the film is co-produced by Toho, the producers of the Godzilla films by the way).

The player character of the Hunter is bumped down to the supporting cast to make room for Milla Jovovich, the mainstay of Paul W.S. Anderson’s Resident Evil series (and also his wife since 2009), as the lead. Over and above the game, the film gets the addition of a troupe of US soldiers who are displaced into the New World by the activation of a row of standing stones, making this a Portal fantasy. Any faithful version of the game should have been more correctly been an Epic Fantasy adventure along the likes of The Lord of the Rings. What we have here now feels more like Tremors (1990) by way of another Resident Evil sequel. The film goes out with the exact same slingshot ending that Paul W.S. Anderson used in Mortal Kombat where the team of heroes find that the Earth realm is now in danger of being invaded by the monsters.

The disappointment of Monster Hunter is that there is almost nothing to it other than Milla Jovovich and Tony Jaa battling giant monsters. The film has also stripped out almost anything that might resemble a plot. The action does briefly stop around the 1:15 mark (three-quarters of the way through the film’s 1:43 minute running time) so that Ron Perlman who plays some kind of sand pirate captain can deliver a sketchy explanation about the existence of the two realms involving a sky tower created by the ancients.

This is a film that is stripped to a series of monster fighting sequences and … nothing else, only the most nominal of explanations about what we are doing there. That and various scenes where Milla Jovavich and Tony Jaa befriend one another and make jokes despite not speaking a common language. The very basics anyone would ask of a film is some kind of explanation of what the realm is (at least more than a couple of lines of dialogue) and who the characters are. The upshot seems almost the complete antithesis of what a film should be.