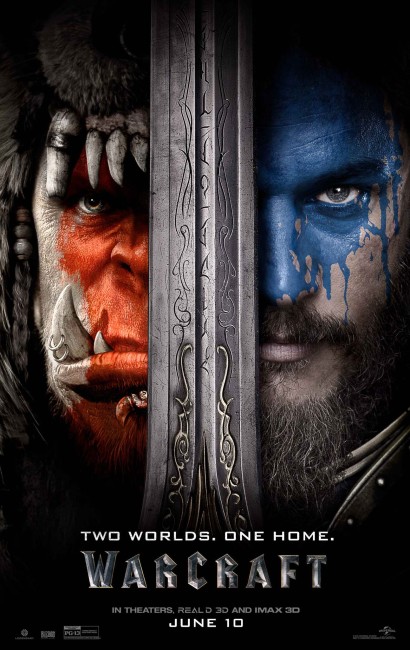 aka Warcraft: The Beginning

Using a magic known as The Fel that drains the lifeforce of living creatures, the orc sorcerer Gul’dan opens a portal to the human world of Azeroth and leads a raiding party through. He is accompanied by the orc chieftain Durotan and his pregnant wife Draka. The human warrior Anduin Lothar, brother-in-law of the king of Stormwind, leads a sortie to investigate. They clash with the orcs and capture the half-orc, half-human woman Garona. Anduin also meets the disgraced apprentice magician Khadgar who urges the king to contact The Guardian. As they meet The Guardian Medivh, Khadgar becomes increasingly suspicious that he has become corrupted by The Fel. The only choice seems for the king to mobilise armies against the orc forces. Meanwhile, as Gul’dan prepares for all-out war and to bring more orcs through the portal, Durotan becomes concerned about his increasingly ruthless ways.

Warcraft is one of the most popular computer games in the world. The first iteration of the game was with Warcraft: Orcs & Humans (1994), a game for the desktop PC from Blizzard Entertainment in which one could play either a human in the world of Azeroth or one of the invading orcs. The game could be played in either single or multi-player mode as one built up resources and eventually engaged in combat against the opposite side. There were several versions of this but the version most known to the world is World of Warcraft (2004), which expanded the game into an MMORPG. Over various generations of the game, Blizzard expanded out to build a massive fantasy kingdom in which players inhabit roles and interact. The purpose of the game is to collect in-game money and experience by joining guilds and going on quests with other players. World of Warcraft boasted some twelve million subscribers in its heyday (over half that currently). The popularity has been such that Blizzard have sold much ancillary merchandise, including more than twenty novels, a comic-book series, a collectible trading card series and tabletop games.

A film version of Warcraft has been announced for the better part of a decade and at one point was to be directed by Sam Raimi. (There are also rumours that Uwe Boll sought to obtain the rights but was dismissed by Blizzard in no uncertain terms). The eventual film production was taken over by Duncan Jones, the son of David Bowie, who has become a not inconsiderable film director in his own right first with the widely acclaimed Moon (2009), followed by the alternate timeline film Source Code (2011) and subsequent to this the SF film Mute (2018).

I am not a gamer (takes too much time away from watching movies) so am not particularly concerned to the extent at which Warcraft the film translates the game to the screen. To all accounts, it does so faithfully. The film appears to be made by those loyal to the game. The story in effect acts as a prequel to the game scenario – the opening of the portal between the worlds of Azeroth and Draenor, the home of the orcs, forms a backdrop of the game – indeed, Draenor is destroyed in Warcraft II: Beyond the Dark Portal (1996).

Rather more, our concern here is how Warcraft works as a film. There has been a great deal of epic fantasy of the screen following the success of The Lord of the Rings films. Much of this has been dross – Earthsea (2004), Eragon (2006), Seventh Son (2014) and tv’s The Shannara Chronicles (2016-7); some of it well worthwhile – Stardust (2007), tv’s Game of Thrones (2011-9). The problem is the distinction that people sometimes use in differentiating between ‘high fantasy’ and ‘sword and sorcery’. High Fantasy usually refers to the elaborate creation of a full imaginary world, its peoples and their culture; Sword and Sorcery is taken to refer to cheap copycats or the more blood-boiling adventurer fantasy typified by Robert E. Howard.

The problem when we come to Warcraft is that what we have is third hand J.R.R. Tolkien that is by definition ‘sword and sorcery’. Tolkien essentially created high fantasy when he spent twenty years dreaming up Middle-Earth, its world, its history, its maps and languages, which in themselves were drawn from Nordic and Old English sagas. Those who came after – writers such as Terry Brooks, David Eddings and Robert Jordan – were enthused by Tolkien but unimaginatively rehashed the basics he had laid down. Then came role-playing games like Dungeons and Dragons (1974), which stripped Tolkien down to a playable system based on character charts and dice rolls.

Warcraft was essentially a computer game version of Dungeons and Dragons and does little more than build on the same worldtype – a society that runs along the lines of a mediaeval monarchy, the same character archetypes and even the same names of creatures that are all drawn from Tolkien. The names of the kingdoms may change, the design of the orcs, elves and dwarves might be different but everything comes directly from the Tolkien template. The major difference between World of Warcraft and J.R.R. Tolkien is that the game emphasised gaining experience and building up one’s skills and resources. However, in the film, none of that remains and all that we get is a knockabout adventure with humans and orcs fighting – in other words, the film has stripped the basics of the gameplay out in favour of fantasy action and is thus routine sword and sorcery.

The major problem I had watching Warcraft was that everything in it looks like a massive motion-capture cartoon. It is impressive watching armies of humans and colossal-sized orcs clashing. The problem is that you are never at any point less than aware that what you are watching is motion-capture CGI. It is a film that suffers from too much Uncanny Valley. I mean, I had a great deal of liking for Avatar (2009), which has about the same ratio of CGI to live-action that Warcraft does, but there you feel like you are watching characters on screen and you have a director who invests in creating a sense of wonder. By contrast, Duncan Jones seems to be conducting a fantasy film by way of Michael Bay – he offers little in the way of plot development but rather seems to hurtle quickly on towards the next combat scene or offering up giddy shots swooping through the city or those solely designed to make you catch your breath like Travis Fimmell casually jumping out of a tower to be caught on the back of his gryphon. This is a film that creates a world but lacks the interest in slowing down to explore it or having anything other than big epic action scenes occurring.

Warcraft feels like a string of scenes with characters combating, lots of eye candy flashes of magic but that fairly much everything could be reassembled in random order without making too much difference to the plot. The characters rarely have much individuation – they are stock Dungeons and Dragons character classes such as the warrior, the apprentice magic user, the half-orc girl (given the size the orcs are here, this does lead to some intriguing pondering about how orc-human mating habits would go) and so on. The only character who actually gets an interesting dramatic arc Dominic Cooper’s king but his self-sacrifice seems so absurdly unmotivated, it fails to seem like it is being conducted by a human being.