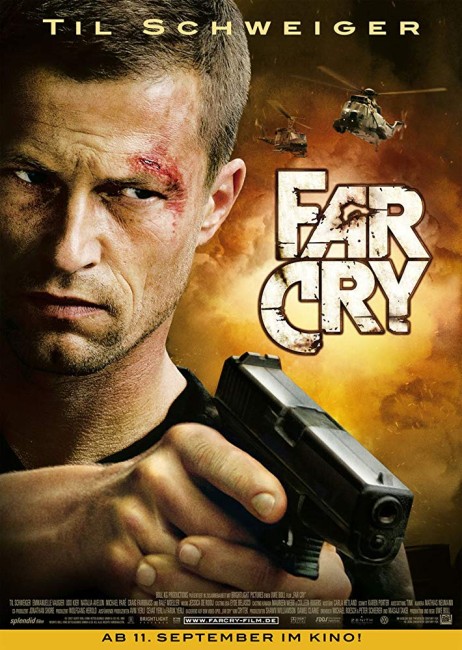 On a remote island, Dr Lucas Krieger has been conducting experiments to create a super-soldier. He demonstrates the finished creation, a killing machine that is invulnerable to damage, to his US military backers. When they learn that it will slaughter everything in its vicinity and is unable to be controlled, they want to pull the plug on the project but Krieger turns on them. Elsewhere, journalist Valerie Cardinal is suspicious about Krieger is up to on the island. Her uncle Max is one of the soldiers stationed with Krieger and has agreed to leak information to her. She rents the charter boat of former soldier Jack Carver to travel out to the island. However, Krieger’s mercenaries discover that Max is betraying them and so Krieger transforms him into one of the zombified super-soldiers. Valerie walks into a trap and is captured, while Jack’s boat is blown up. Jack survives and returns to rescue Valerie. Together they have to fight their way past Krieger’s mercenaries and super-soldiers to get off the island.

Uwe Boll probably needs no introduction as the man who is for rightly or wrongly regarded as the world’s worst director – I do not fully agree with this and am prepared to defend Uwe Boll somewhat. Boll has been almost exclusively associated with videogame adaptations with the likes of House of the Dead (2003), Alone in the Dark (2005), Bloodrayne (2005) and sequels, In the Name of the King: A Dungeon Siege Tale (2007) and Postal (2007). These have attracted wide ridicule for Boll’s abandonment of game canon; his disastrous and frequently laughable casting choices; absurd actions sequences; and frequently nonsensical plots.

Despite his reputation, someone out there keeps watching Uwe Boll’s films, allowing him to be prolific enough to produce some 2-3 films per year. There is also indication that Boll seems to be stretching beyond the videogame/action/horror director he is pegged as – In the Name of the King shows that at least his blunt force persistence was having noticeable improvements, while Postal even obtained some decent reviews in some parts. More recent films, one-word topic titles such as Darfur (2010) and Aushwitz (2011), show Boll attempting to be a ‘serious’ director and tackle large issues, although his employment of low-budget, gore-heavy horror movie sensibilities into the depiction of genuine real-world atrocities is something that borders on dubious taste.

Far Cry is another of Uwe Boll’s videogame adaptations. It is based on the first-person shooter game from Ubisoft, which premiered in 2004. The plot of the film follows the game reasonably closely in which the player took up the part of Jack Carver, a former Special Forces operative working as a charter boat captain who is hired by the journalist Valerie Constantine, his boat is blown up and he is stranded on an archipelago of South Pacific islands where he must fight off the mercenaries and various genetic engineering experiments created by the mad scientist Dr Krieger. Being made on a lesser budget, the range of creatures and exotic locations in the game have been decidedly telescoped down when it comes to the film.

While I have defended some of Uwe Boll’s films and he has been showing overall improvement, Far Cry is a slip back into typical Boll shoddy production values. It has in abundance all the hallmarks of what it is that people criticize about Boll’s films. It comes with the loud and noisy boilerplate action sequences that Boll loves to throw in, most of which seem to happen at random and do nothing to advance the plot – there is a long vehicle chase sequence across the island with Til Schweiger and Emmanuelle Vaugier driving backwards in an SUV amid dramatics about dropped hand grenades and the vehicle being set on fire, before the laughable scene where Vaugier accidentally fires a harpoon that goes through the roof of the SUV and attaches itself to a helicopter overhead whereupon the SUV is whisked up off the side of a cliff, falls into the sea below and the harpoon gets wound up in the helicopter’s blades causing it to explode. There is another completely random boat chase sequence during the middle of the film.

The entire film from the plot to the action sequences to the conception of Udo Kier’s mad science scheme feels like it has been slapped together by Boll with even more of a slapdash indifference than usual. The action sequences in Alone in the Dark and especially In the Name of the King at least had a kinetic energy if not an imagination, whereas here they are only cheap, uninvolving and not particularly convincing – as with most of Uwe Boll’s films, you can edit them out and not change the plot one bit. The scene where Til Schweiger and Emmanuelle Vaugier cuddle up for the purpose of ‘sharing body warmth’ is one of the most ridiculously contrived and awkward seeming love sequences ever written outside of a porn film.

There is plenty of the usual bad acting that infects Uwe Boll’s films. Cast as the supposedly American hero, German actor Til Schweiger plays with a lazy cockiness that shows he is not taking much of the show seriously. Coming in his accent, the one-liners lack the comic-book inflection they should have and fall flat. The upshot is this is that he comes across as seeming contemptuous of the show around him.

This is also a film where Uwe Boll seems to feel the need to throw in excruciating comedy relief – Jay Brazeau as a boat rental owner, or the terrible performances of Michael Robinson and Carrie Genzel as the two loathsome American tourists that we encounter in the opening scenes. The worst part of the film however is the loud and obnoxious performance provided by Chris Coppola as the food delivery man who gets dragged into the action during the latter half of the film. Coppola’s comic relief element quickly becomes the most irritating thing about Far Cry.

Uwe Boll’s other genre films are:- the serial killer film Sanctimony (2000); the backwoods horror Blackwoods (2002); the high school shooting rampage film Heart of America: Home Room (2002); the zombie film/videogameadaptation House of the Dead (2003); the monster movie/videogame adaptation Alone in the Dark (2005); the vampire hunting videogame adaptation BloodRayne (2005) and its sequels Bloodrayne: Deliverance (2007) and Bloodrayne: The Third Reich (2011); the fantasy adventure In the Name of the King: A Dungeon Siege Tale (2007) and its sequels In the Name of the King: Two Worlds (2011) and In the Name of the King 3 (2014); the videogame adaptation Postal (2007), a surreal bad taste satire about a shooting rampage; Seed (2007) about an executed killer returned from the grave; Rampage (2009) about a man on a shooting spree and its sequels Rampage: Capital Punishment (2014) and Rampage: President Down (2016); Stoic (2009) about sadism and brutality in a prison; The Final Storm (2010) about an apocalyptic storm and the arrival of a mysterious stranger; the gonzo bad taste comedy Blubberella (2011) about an overweight vampire heroine; Assault on Wall Street/Bailout: The Age of Greed (2013) about a man on a shooting spree against bankers; and a segment of the horror anthology The Profane Exhibit (2013). Boll has also produced the ghost story They Wait (2007), Alone in the Dark II (2008), Zombie Massacre (2012), Legend of the Red Reaper (2013), Prisoners of the Sun (2013), Morning Star (2014), Viy (2014), Anger of the Dead (2015), Zombie Massacre 2: Reich of the Dead (2015) and Jack Goes Home (2016). Fuck You All: The Uwe Boll Story (2019) is a surprisingly insightful documentary about Boll and his career.