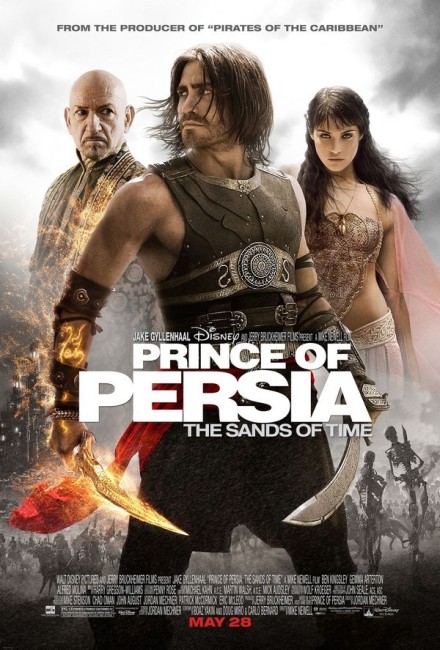 In the ancient kingdom of Persia, the king Sharaman adopts the young orphan Dastan after he witnesses Dastan’s bravery in standing up to save another in the marketplace. Fifteen years later, Dastan leads a ragtag army in battle alongside the regular Persian armies commanded by his brothers. When it is discovered that weapons are being smuggled from the holy city of Alamut, Prince Tus chooses to ignore the oath that Alamut be left untouched and makes plans to raid the city. Instead, Dastan climbs the wall and breaks open the city gates preventing the massacre that Tus would have created. During this, Princess Tamina is captured and Tus announces his intention to take her as one of her wives. Tamina has given a valuable dagger to another man for safety but this has been taken by Dastan in a fight. Tus asks Dastan to present Tamina to his father, the King, along with the gift of a captured prayer mat. However, the prayer mat has been poisoned and kills the king. Dastan is immediately suspected and forced to flee into the desert in the company of Tamina. Dastan makes the discovery that the dagger contains The Sands of Time that, when pressed, will release a sand that rewinds time by one minute, allowing the outcome of events to be changed. Dastan realises that he was set up by the king’s brother Nizam who engineered the attack on Alamut to obtain the dagger. Fleeing through the desert, hunted at all corners, Dastan and Tamina plan to prevent Nizam’s scheme to claim the crown for himself by turning back time at the source of the sands, something that will have disastrous consequences.

Prince of Persia: The Sands of Time is one of an increasing body of films that have emerged in recent years based on video/computer games. This makes a certain sense as industry prognosticators are predicting that sales of videogames will soon outstrip that of movies. The original Prince of Persia game appeared in 1989 and was designed to be played on the home computer. There have been about a dozen versions since, including The Sands of Time (2003), which was the fifth game to be released. Prince of Persia draws on cliches of Arabian Nights mythology in a series of adventures where the hero must encounter evil sorcerers, djinns and such like, while engaged in sword combat and dealing with the usual traps and puzzles of a game. One of the aspects that features in most of the Prince of Persia games is the Sands of Time and the Dagger of Time, which the hero can use to reverse the action that has just happened over the last minute to choose a different outcome. Many of the games also feature elements where the hero must manipulate or venture through time.

Videogame adaptations have not fared particularly well on screen with odd exceptions – Final Fantasy: The Spirits Within (2001), Silent Hill (2006). (See bottom of the page for a full list of videogame adapted movies). The producers of Prince of Persia clearly hoped otherwise. The film was produced on a lavish $150 million budget by Jerry Bruckheimer – the king of loud and noisy bombast such as Con-Air (1997), Gone in 60 Seconds (2000), the National Treasure films, many early Michael Bay films and who previously ventured into fantasy with Disney for the Pirates of the Caribbean films. Bruckheimer has made the unusual choice of bringing in a class director to handle the show in the British Mike Newell, the man behind acclaimed works like Dance with a Stranger (1985), Enchanted April (1992), Four Weddings and a Funeral (1994), Donnie Brasco (1997) and Love in the Times of Cholera (2007), which usually play to very different audiences than the one for Prince of Persia. Newell has had a number of other brushes with genre material before, including the mummy film The Awakening (1980), the New Zealand true crime film Bad Blood (1982), the Irish magical realist film Into the West (1992) and Harry Potter and the Goblet of Fire (2005).

Jerry Bruckheimer and Mike Newell seem talents that are about as far apart as it is possible to get in terms of where their focus lies – loud and noisy action vs the British arthouse – so I was wondering exactly how Prince of Persia: The Sands of Time was going to emerge. Would Mike Newell bring a touch of class that would elevate the muchly debased genre of the videogame-adapted film? I was hoping so but the results prove mixed. Certainly, the various elements have resulted in a lavishly produced film. The design people and effects houses produce an amazing array of cities and vistas of armies that fill the screen with detail that looks edible in its richness of texture. Mike Newell shows an assured hand with the action element and provides an ample degree of the acrobatics leaps, parkour scenes and furious sword combat that one expects of the film. As such, Prince of Persia swashes and buckles in a light and entertaining way. It is not a profound adventure film; it’s not another The Thief of Bagdad (1924 or 1940), a The 7th Voyage of Sinbad (1958) or a Raiders of the Lost Ark (1981); it is intended as pure box-office popcorn.

Less enthusiastic is the film’s plot, which was notably devised by the game’s creator Jordan Mechner. It appears that with the new fantasy boom that has emerged in the 00s, following the successes of Harry Potter and Lord of the Rings films, that filmmakers are now belatedly turning to Arabian Nights properties with eminently forgettable earlier entries like The Scorpion King (2002) and the animated Sinbad: Legend of the Seven Seas (2003), not to mention The Asylum quickly jumping in on the tail of Prince of Persia with another of their quick ripoffs The 7 Adventures of Sinbad (2010).

Prince of Persia consists of a plot assembled from Arabian Nights cliches – the evil vizier, the good prince who is banished from the kingdom due to the vizier’s chicanery that was the chief plot arc of The Thief of Bagdad (1940), the beautiful princess, the quest for a magic object (usually a magic lantern). On the other hand, Prince of Persia disappoints on some of these aspects. Most of the action is physical in nature and there is a surprising lack of magic. Most of these Arabian Nights films feature a villain who is also a black sorcerer but at most here the villain uses only a poisoned prayer mat. There is a surprising lack of the fantastical accoutrements that fill these tales – magic carpets, djinns or fantastical creatures – bar the Sands of Time and some supernaturally empowered assassins.

As with almost all Arabian Nights films, Prince of Persia offers up a fantasy version of history. It is a version of Arabia/Persia where the cultural colouration has been appropriated but any direct reference to Islam has been neatly avoided. It is also a Persia/Arabia where the ethnic lines have been blurred considerably and all the speaking roles cast with Caucasian actors. Certainly, Prince of Persia pays a little more lip service than most other Arabian Nights films in that actors like Ben Kingsley, Alfred Molina and Gemma Arterton have made up to look a reasonably close proximity to Middle Eastern ethnicity. On the other hand, Jake Gyllenhaal notably stands out with his blue eyes, although the most incongruous member of the cast is surely the red-haired Richard Coyle.

The other oddity seems to be what the film refers to as Persia geographically. The map that appears at the start has the film’s Persia extending from the Gulf of Suez on the west to China in the east. This is not too different from Persia during the Achaemenid Empire, which in fact extended further than this – well up into Europe and as far west as Libya. However, the Achaemenid Empire existed between the third and fifth centuries BC, much earlier than the film’s stated 6th century A.D. timeframe. During this period, Persia was referred to as the Sassanid Empire, which largely comprised of modern-day Iran and Iraq and extended from most of Egypt to India. In the modern historical era, Persia has come to refer interchangeably to Iran and its people. This does bring one to one of the more amusing things about the film – how it manages to slip in a amusingly coded critique of the Iraq War (the invasion of a city on the pretext of a search for non-existent weapons ie. the Weapons of Mass Destruction fraud).

The major problem I had with Prince of Persia was Jake Gyllenhaal as swashbuckling action hero. I have liked Jake Gyllenhaal in various other roles. It is just that he is not suited to the part here. With his big gloopy eyes looking out from beneath long artfully tangled hair, designer stubble on his lantern jaw and buffed pecs, Gyllenhaal looks laughably out of place – more like a parody cartoon character than a romantic action hero. He gets into the action scenes but also plays with a certain modern cockiness that tends to distract, although at least the film sees fit not to outfit him with a string of flip one-liners. Gemma Arterton radiates class, elegance and beauty. Most of the others in the cast play capably in routine roles, although some of Alfred Molina’s comic-relief scenes, especially the ostrich races, could easily have ended on the cutting room floor.