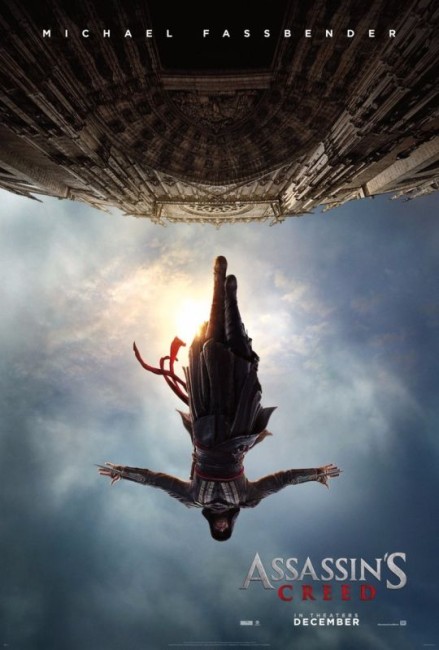 In the present day, Callum Lynch is executed for murder. Cal instead wakes up to find he his death has been faked by the Abstergo Corporation. Held at their facility in Madrid, scientist Sofia Rikkin, the daughter of Abstergo’s CEO, explains they are engaged in a war across the centuries between two groups, the Templars and the Assassins, for possession of the Apple of Eden, an artefact that will grant the holder the ability to control free will. She introduces him to The Animus, a machine that scans Cal’s DNA and then allows him to relive the memories of a past life – in this case, as an Assassin named Aguilar in Andalusia in the 15th Century at the height of the Spanish Inquisition. Even though it is dangerous for him to do so, Sofia presses Cal to re-enter The Animus and travel back so that they can locate the whereabouts of The Apple.

Assassin’s Creed (2007) was a computer game from Ubisoft that proved a popular hit. To date, there have been four principal games, along with a series of supplementary games, a comic-book and a series of novels. In the original game, the player character was present-day bartender Desmond Miles who is inducted into the Abstergo Corporation and learns of their war across the ages between the Assassins and Templars for possession of the various Pieces of Eden that can control free will. Through The Animus, a virtual reality device that taps into the memories of one’s ancestor, he re-lives life as a Muslim Assassin during the Crusades. In the game, the player controls the Assassin via The Animus interface and engages in various missions, assassinations and supplementary adventures in the past. Subsequent iterations of the game regressed Desmond to adventures during Renaissance Italy and the French and American Revolutions.

Videogame adaptations to film don’t have a very great reputation (see below for a full list). Although there are some halfway reasonable exceptions such as Final Fantasy: The Spirits Within (2001) and Silent Hill (2006), Assassin’s Creed proves no exception. I am not a gamer but I suspect that one of the reasons that games and film adaptations don’t mix is the obvious one – they are two different genres. Film is largely a passive medium where the consumer sits back and allows the story and visuals to amuse, engage the emotions, the adrenal gland and so on. By contrast, gaming is an interactive medium where the player directs the character through the story and everything that happens is a direct result of player choices.

Some things work well in one medium and not others. It is hard to produce suspense and surprise story twists in a game. Nor does a game do well with non-action sequences that involve character and emotional nuance that would be delivered by actors – the player character in a game is meant to be a cutout that shoots things and is not required to have any emotional complexity. On the other hand, film audiences are unlikely to be kept spellbound by the sustained drama of moving through a complex shooting at targets and collecting treasures.

In the Assassin’s Creed game, the present-day scenes are a framework akin to the scenes that lead up to a flashback in a film. The main aspects of the game take place in the past and are centred around assassination missions and efforts to steal the all-important fantasy McGuffins of the Pieces of Eden. On screen, this results in a story that is awkward. If Assassin’s Creed were made without the pedigree of a hit videogame and the script were an unknown original work, I am certain it would never have been greenlit as a film. Any decent script editor/producer would have tossed it onto the reject pile or else demanded that it undergo so many rewrites that it would emerge as something unrecognisable.

Consider:– The film spends a good deal of time during the present-day scenes where we are introduced to Michael Fassbender’s central character and the Abstergo Corporation. All of this is necessary to the set-up of the game’s basic premise. However, the film makes lesser effort when it comes to the flashback scenes – almost all of the action scenes are centred here but we get no mission or assassinations like we do in the game. The nearest we get to a mission consists of a single scene where Michael Fassbender dives down through an open ceiling to snatch The Apple. Indeed, for a film that claims to be about an assassin, we never see any of the assassins engaged in their profession throughout, unless you want to count some of the deaths that occur during the climactic breakout.

As a film, what we are left with is something curiously static and uninvolving. Dramatically, everything interesting has already happened in the past and the outcome been decided. This leaves the present-day scenes, which comprise the bulk of the film, as curiously inert ones where all the characters do is sit around and watch what happened. The effect is akin to a film that consists of actors watching tv or a cinema screen where we occasionally cut to the screen to see the drama of the show play out. There are ominous warnings about the dangers/urgency of what is going on and some occasionally nifty visuals where Michael Fassbender pretends to wrestle manifestations of things from the past but crucially nothing happens during the present-day scenes.

It is only in the last fifteen minutes where the assassins break out that any drama occurs. The result is kind of akin to The Da Vinci Code (2006) retooled as an action film – albeit without an historical mystery/treasure hunt that is even halfway engaging. (The Apple of Eden defines the idea of a Fantasy McGuffin about as generically as it is possible to do – we never even see its reputed ability to eliminate free will in action, which is sort of the expectation you get when something like that is introduced).

Nothing in Assassin’s Creed worked for me. Celebrated names like Michael Fassbender and Marion Cotillard vanish in their roles and it is only Jeremy Irons who gives a throwaway part some life. The action scenes are no more than bland CGI-enhanced eye candy – something not at all helped by the digital photography that lets the whole film take place in a muddy dun colour. A sequence racing around a runaway cart seems so by the numbers it passes into forgettability before the film has even ended. The action picks up slightly more during the escape from the stake in Andalucia and a furious parkour sequence running around the walls and roofs of the city, which at least impresses with some virtuoso stuntwork.