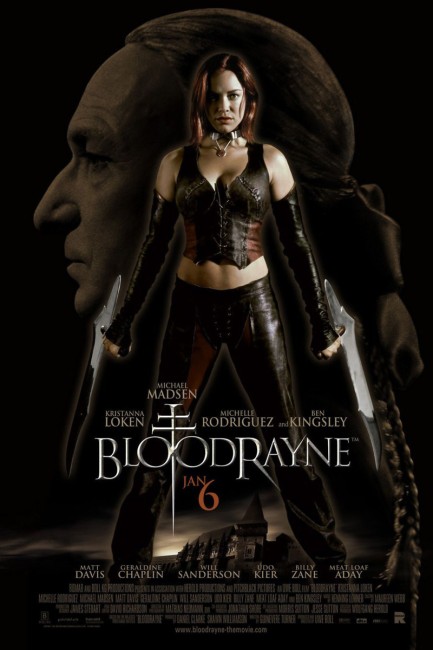 Rayne is a Dhamphir, born of both human and vampire and existing as half of either – she is able to walk in the sunlight but also needs to feed on blood. Rayne makes an escape from the circus where she has been imprisoned as a freak attraction. She sets forth on a quest to find the relics of one of the most powerful vampires that have been scattered around the world. She is pursued by a group of vampire hunters from the Brimstone Society and eventually agrees to a tenuous truce with them. At the same time, Rayne’s quest attracts the attention of various other parties, including Prince Elrich who seeks to undermine the Brimstone Society and Rayne’s father, the all-powerful vampire ruler Lord Kagan.

German director Uwe Boll has gained a reputation as the worst director currently at work in the world. Boll’s reputation hit its stride with the releases of House of the Dead (2003), Alone in the Dark (2005) and BloodRayne. All of these were adapted from computer games. Indeed, one suspects that a good part of the audiences that are decrying Boll’s ineptitude consist of the videogame junkie crowd whom Boll has put offside by proving exceedingly liberal when it comes to adhering to the canon of the games. Boll would subsequently go onto make other computer game adaptations with the likes of In the Name of the King: A Dungeon Siege Tale (2007), Postal (2007) and Far Cry (2008). (A full list of Uwe Boll’s genre films is at the bottom of the page).

Boll certainly treats the source material for BloodRayne, the Majesco game that first appeared in 2002, very liberally. Boll has kept some of the nominal basics of the game – the heroine Rayne who is half human, half vampire and is recruited by the Brimstone Society, as well as her search for her father. However, the game was set in 1932 where Rayne and the Brimstone Society were engaged in a series of adventures to stop an occult group that was trying to allow Adolf Hitler to come to power. When it comes to the film, Boll, operating from a script by no less than lesbian writer/actress Guinevere Turner, who also wrote American Psycho (2000), largely abandons any of the game’s setting and substitutes a vaguely 18th Century European setting that gives the clear impression that Boll has been trying to copy the epic fantasy look of The Lord of the Rings. In the game, for instance, when Rayne finds her father Lord Kagan, he is a Nazi agent, while the artefacts of power they are trying to gather assemble into a demon that occultists want to use to aid Adolf Hitler.

With BloodRayne, Uwe Boll has drawn inspiration from the modern vampire film – the likes of Blade (1998) and sequels, Underworld (2003) and sequels, Van Helsing (2004) and Ultraviolet (2006), all of which have readily adopted the look of the graphic novel and added a good many modern action and martial moves and CGI effects into the traditional vampire mix. Boll is certainly not unstinting when it comes to gore. Everywhere we get sprays of blood, swords through the body and impaled in the eye.

Whatever else you can say about Uwe Boll – and I do not count myself as a major naysayer (there are certainly far better contenders for the world’s worst director) – he throws up some energetic action on screen. Although, one sequence where Kristanna Loken must venture through a trapped room filled with deadly whirring (and obviously CGI) scythes to obtain an artefact feels exactly like it has been transplanted from a videogame. There is a ridiculous love scene between Kristanna Loken and Matt Davis in a jail cell with she holding herself up on the bars of the cell while he humps her up against them.

The plot of BloodRayne feels like it is slung together from a host of vampire film and sword and sorcery cliches – evil dark lords, kingdoms on the march as small parties set out on a quest, artefacts of great power, the One Vampire, a Blade-like hero(ine) who is half-human, half-vampire. There are a good many random plot elements that leave you wondering what is happening and why. You are not sure, for instance, why Billy Zane’s prince despatches his troops, or why Michelle Rodriguez’s vampire hunter suddenly turns against the rest of the party. Some sequences – like the encounter with Meat Loaf – seem randomly attached and you are not sure why the film had to make a detour to meet him. In the end, BloodRayne is a film where you are never clear why anything is happening. It is filled with numerous poses, various betrayals and shiftings of sides, everyone is hunting some McGuffin artefact and eveything is whipped along by Boll at a busy pace amid a good deal of blood-letting but little in the way of coherence. (Guinevere Turner has spoken about how Boll started filming using only her first draft).

One of the criticisms that can be more than fairly made of a Uwe Boll film is its frequently disastrous miscasting. This is certainly true about BloodRayne, where Boll delivers in spades. Heroine Kristanna Loken, who made her appearance as the female Terminator in Terminator 3: Rise of the Machines (2003), lacks any presence as the heroine. She has some nice action moves but when it comes to exuding a toughness, a determination or anything at all, Loken seems watery and shy. Not that she is unable to – she made a great showing just before BloodRayne as a warrior queen in the tv mini-series Ring of the Nibelungs (2004).

Michael Madsen, whom one has always held was an underrated actor but who has appeared in some junk in recent years, looks uncomfortable in an ill-fitting long hair wig as the nominal hero of the show. Billy Zane turns up as a prince of some kingdom and owlishly blinks his way through several scenes clearly without much idea what he is doing there. Meat Loaf gives an amazingly bad performance as a vampire patriarch outfitted like a Romantic composer and with the most unconvincing long hair wig of anyone present (and while surrounded by the horde of half-naked prostitutes that Boll apparently cast because they were cheaper than local Romanian actresses).

The most eyebrow raising of these performances is multiple Academy Award winner Ben Kingsley as the villain of the show. Kingsley considerably damages his otherwise sterling credibility as an actor and gives an hilariously campy performance. The sight of Gandhi himself lowering his mouth and trying to sink his teeth into a woman’s neck cannot help but give you a case of the titters. BloodRayne featured heavily at that year’s Golden Raspberry Awards with Kristanna Loken, Ben Kingsley and Michelle Rodriguez all being nominated in the worst acting categories.