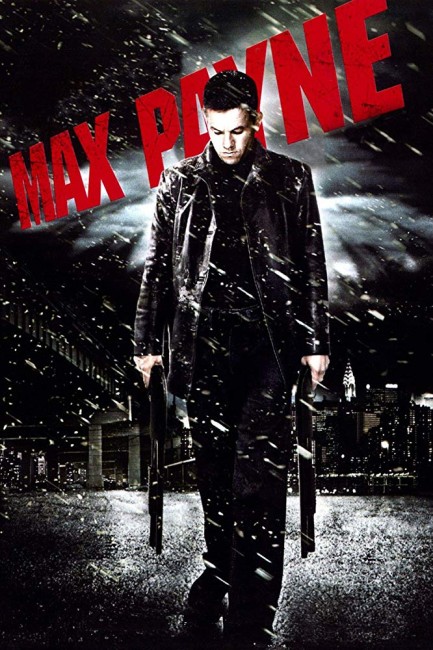 Max Payne is detective in the NYPD’s Cold Case office. Max is haunted by the murder of his wife Michelle and baby daughter and is obsessed with finding the killer. Off duty, he tracks down criminals and seeking leads. Pursuing one lead, he meets Natasha Sax at a party and takes her back to his apartment. The next day Max’s former partner Alex Balder reveals that Natasha has been found murdered with Max’s stolen wallet on her. Balder finds that both Natasha and one of Michelle’s killers had the same winged tattoo on their wrists but he is next found murdered in Max’s apartment. The police regard Max as the chief suspect. Joined by Natasha’s sister Mona, Max goes in search of the killer. He discovers that the tattoos are the mark of the Valkyries, the angels of the battlefield in Norse myth. This leads him on the trail of an experimental drug Valkyr, created by Aesir Pharmaceuticals in an effort to produce super-soldiers. Max learns that Michelle, who worked for Aesir, was forcibly silenced after discovering evidence of illicit experiments.

The Max Payne videogame was created by the Finnish company Remedy Entertainment and released in 2001. The basic premise of the game follows the title character as he tries to track down those responsible for the murder of his wife, child and partner. The trail takes the player through various Mafia connections and to the Aesir Corporation, which are found to be conducting illicit experiments to create super-soldiers using the drug Valkyr. Max Payne was principally a shooter game, with the player having to eliminate numerous mercenaries, security guards and Valkyr drug-crazed soldiers. One of the game’s novelties was the employment of the Bullet Time graphics inspired by The Matrix (1999) where the lead character was able to move at great speed and duck bullets as they came towards them in slow-motion while under the influence of the drug. Certainly, the film follows the videogame plot with a good deal of faithfulness. Most of the characters and game elements are there. The odd aspect that has been dropped – a few less groups trying to kill Max and no Mafia, while his wife’s occupation has been moved from the D.A.’s office to an artist working at the Aesir Corporation. There is even an after-credits coda that sets things up for a potential adaptation of the game sequel Max Payne 2: The Fall of Max Payne (2003).

I must admit to being captivated by Max Payne‘s trailer, which appeared to offer a standard revenge action drama, at least until the final image – the extraordinary one of a man being snatched backwards out of a window by a black winged demon figure. I was interested to see what John Moore, who previously made Behind Enemy Lines (2001) and the remake of The Omen (2006) and subsequently went onto the inane A Good Day to Die Hard (2013), would do with the film.

It starts promisingly. There is an attention-catching intro with Mark Wahlberg narrating the story while lying apparently dead dumped at the bottom of the river amid a host of other Mafia bodies. The film then cuts back to one week earlier as a detective introduces a rookie to Wahlberg and the Cold Case department, making the apt comment that everyone who works there is haunted by some failure, and the subsequent scenes with Wahlberg baiting and taking on a group of street punks in a subway bathroom. John Moore does a fine job in creating a bleakly noirish wintry mood, reducing the lighting to almost monochrome with the streets seen in only blacks and greys amid perpetually blowing snow or rain.

The great disappointment about Max Payne is that this never transpires into anything. Certainly, John Moore does a good job in keeping the film moving. There are several scenes where the action comes to life – the shootouts in the subway bathroom, in the Aesir factory and, in particular, a massive armed attack in the Aesir offices. That said, the film is not the wall-to-wall kinetic ride that one expects it to be – the game almost entirely consists of nothing but shoot-’em-ups and was supposedly modelled on John Woo’s Hong Kong action films. However, it is hard to think of Max Payne the film in a similar vein to that, accomplished and all as individual sequences are.

Even more disappointing is the film’s handling of its fantastic elements. It soon transpires that the fabulous winged figure from the trailer is a cheat. The sequence comes with unearthly effect but it is only taking place in a Valkyr user’s mind as they jump to their death. There are a number of similar winged figures throughout, but all of these only take place inside drug-induced states and cannot be considered as genuine ontological manifestations. (The result might be akin to taking one of the LSD films of the 1960s and trying to isolate the various psychedelic trip sequences to suggest that one is watching a science-fiction film). The film also packs the story with a number of references to Norse myth – Valkyries, a nightclub named Ragnarok (the Norse end of the world), an Aesir Pharmaceuticals (after the pantheon of Norse gods) and Mark Wahlberg’s former partner named Balder after one of the gods of the Aesir. When this starts to become apparent, one sits intrigued wondering where the film is taking this – certainly, the idea of drug dealers and a pharmaceuticals firm dealing an illicit substance that appears to be calling Valkyries down to snatch drug addicts has a genuine bizarreness to it. In the end, these transpire as nothing other than a handful of pretentious allusions the film makes. The places and characters could have been named anything and made no difference to the story.

Boiled down to it, all that Max Payne transpires as is a mash up between Death Wish (1974) – grim hero seeking violent vengeance for the murder of his wife and daughter – and Jacob’s Ladder (1990) – drug experiments on the military to create super-soldiers start causing people to have hallucinations of angels and demons. The disappointment about Max Payne is that take away the hallucinations of Valkyries – indeed, all the reasons whereby it is being considered as a fantastic film here – and it could work as a mundane crime drama without no difference. There is the feeling that these scenes have been inserted/highlighted only to push Max Payne into a certain market space – the audience for dark gothic fantasy.

Instead of an occult action film as the trailer suggests, Max Payne is merely an average vigilante revenge drama – no more, no less. Even then the film seems lacking in the plot department – one of the most potent examples of this might be how the script never deigns to explain who the two women of the film (Mila Kunis, Olga Kurylenko) are or even why they should be connected to events. They are just there because like the film needs hot chicks. Likewise, the early scenes where Mark Wahlberg visits a snitch’s apartment and it appears that he is delving into an underground of (PG-rated) deviant pleasures is a tame pose that has no relevance to anything that occurs later. Even the opening flashback from Mark Wahlberg dumped at the bottom of the iced-over river– which almost gives the impression that Max Payne is heading into the same territory as The Crow (1994) – turns out to be cheat where it later transpires that he is not dead after all and manages to easily swim up to the surface.

(Nominee for Best Cinematography at this site’s Best of 2008 Awards).