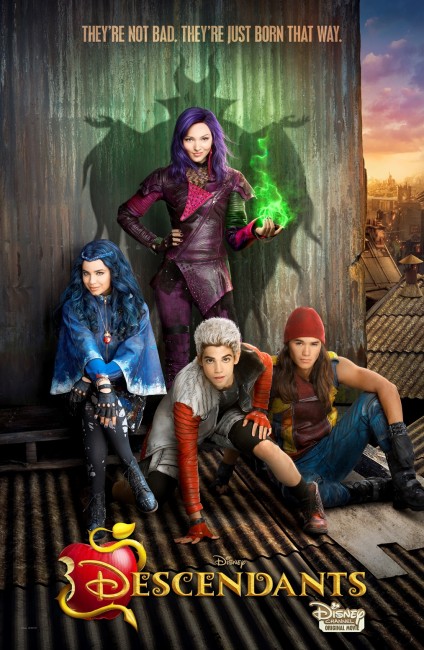 Belle and the Beast have married and rule the kingdom of Auroradon. All of the witches and evil stepmothers have been banished to the Isle of the Lost where they are prevented from leaving by a magical forcefield. Belle and the Beast’s son Ben is about to be crowned. As his first act, he decides that the children of those banished to the Isle of the Lost should be allowed to come to school on the mainland. Chosen are Mal, the daughter of Maleficent; Carlos, the son of Cruella De Ville; Jay, the son of Jafar; and Evie, the son of the Evil Queen that fought Snow White. Maleficent orders Mal to steal the Fairy Godmother’s wand in order to free them and allow her to take over the world. Signing into the Auroradon Prep School, the four teens fight to be accepted. They begin to learn that the ways they grew up with are not all there is – Carlos loses his fear of dogs and befriends the school’s dog; Jay gives up his thieving ways and excels on the sports pitch; Evie learns not to rely on her pocket magic mirror and triumphs in class. Mal meanwhile is determined to get the wand. Learning that the only time the wand is brought out of its forcefield in the museum is for the coronation, she casts a love spell to make Ben abandon his girlfriend and fall for her so that she can be invited to be by his side during the ceremony.

Descendants was a movie made for the Disney Channel. It comes with an amusing premise – namely that the various Disney animated villains (Maleficent, Jafar, The Wicked Witch from Snow White and the Seven Dwarfs (1937) and Cruella De Ville) have all had children and speculates what might happens if they went to school together. (We also get appearances from the live-action equivalent of various other Disney animated characters and their descendants throughout, including the children of Dopey, Mulan and Prince Charming, as well as Cinderella’s mother). The inspiration may have come from the recent release of Maleficent (2014) and its decision to write backstory to Sleeping Beauty (1959), although the idea falls more into the notion of all fictional characters living in a shared universe that we get in works like The League of Extraordinary Gentlemen (2003), tv’s Penny Dreadful (2014-6) and the writings of Philip Jose Farmer and Kim Newman.

There is a cuteness to the premise that is promptly killed by the awfulness of the show as soon as it opens. This is one where we have clearly abandoned the fairytale setting for a contemporary one. Moreover, where the kids are engaged in a dance number choreographed to an utterly processed pop song about how badass they are. (That said, the actual badassery they demonstrate throughout amounts to no more than some petty thieving and using a magic mirror to cheat on a test. In other words, they are Disney juvenile delinquents – ones who only need to clean their faces or the modern equivalent, realise their self-worth, in order to turn their lives around). You hate the kids and their self-absorbed glibness from the moment they open their mouths. Did the film really need to cater so much to this and make each of them into prima donnas delivering catty lines and sarcastic backchat to each other?

The main problem here is that the film has been placed into the hands of Kenny Ortega. A former dance choreographer, Kenny Ortega made one of Disney’s worst live-action films Hocus Pocus (1993) but crucially also directed the huge hit of the Disney Channel tv movie High School Musical (2006) and its sequels, as well as the subsequent remake of The Rocky Horror Picture Show: Let’s Do the Time Warp Again (2016).

Descendants is essentially High School Musical cast with the children of Disney villains. Ortega seems to care nothing about the internal consistency of the original stories. Nor even for that matter does he care for much in the way of continuity to the originals – the very set-up, for instance, has to ignore the fact that most of the Disney films have the parents of the particular children killed off, whereas here they are all alive and imprisoned on an island. Walt Disney would surely be turning in his cryogenic suspension vat at some of the interpolations – like seeing Snow White turned into a tv entertainment reporter.

Moreover, the film is shot on the cheap. There is a tatty CGI dragon at the end while the film’s displays of magic are the banal stuff of children’s live-action fantasy – magic hair rearrangements and the like. While the originals take place in fairytale kingdoms that have not advanced beyond the mediaeval, Descendants is incongruously set in the present day where the various characters ride in limos, use laptops, watch television, play Wii games and the like.

In other words, the film is no more than someone having lazily used contemporary locations and made the most minimal effort at venturing into fantasy because creating a period setting and imagining a teen self-realisation story there would have been too much work. Everything is run over with processed pop songs with meaninglessly bland lyrics that the cast dance and lip-synch their way through without the slightest feeling.

Kenny Ortega and most of the teen cast returned for two sequels Descendants 2 (2017) and Descendants 3 (2019).