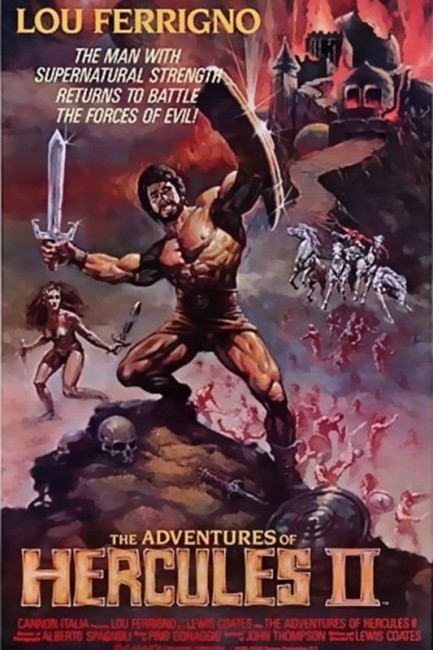 aka The Adventures of Hercules II

A cult has instituted human sacrifices to a god of fire. Two women from the region, Urania and Glaucia, pray to the Little People spirits for help. They learn that four of the gods have rebelled against Zeus and managed to steal seven of Zeus’s thunderbolts. This has also caused The Moon to become erratic in its orbit to the point that it is now endangering The Earth. Zeus brings Hercules back from his place in the heavens and sends him down to Earth to join Urania and Glaucia in retrieving the thunderbolts. The rebellious gods bring Hercules’s nemesis King Minos back from the dead to thwart the mission. However, Minos proves unwilling to follow their plans and soon gains abilities that make him even more powerful than the gods.

The Adventures of Hercules is a sequel to Hercules (1983), which was produced in Italy by the US-based Cannon company. Hercules ended up being laughed off the screens by most audiences, nevertheless Cannon, along with director Luigi Cozzi and stars Lou Ferrigno and William Berger, returned for this sequel. Unlike Hercules, The Adventures of Hercules failed to receive a theatrical release and was consigned to direct-to-video release in English-speaking countries.

Expectedly, The Adventures of Hercules is just as terrible as its predecessor in most regards. The dialogue is frequently laughable in its pomposity. Most of the cast are poor actors – the most notable offender being Lou Ferrigno, a bodybuilder whose main claim to fame was starring as the transformed Hulk in tv’s The Incredible Hulk (1977-81).

There are some incredibly bad effects, many of which are recycled from the first film. One of the worst effects is the utterly tatty looking stop-motion animated Medusa that briefly turns up. There are also some incredibly cheap-looking animation effects, with the worst part of the film being an utterly bizarre sequence where two fighting combatants become glowing line-drawn figures against a starfield, where they transform into dinosaurs, gorillas and snakes. The opening credits that play against a travelling starfield with the names lit up in lights has been copied directly from Superman (1978).

On the plus side, like the first film, there are some imaginative cheap sets – a woman chained to what looks like a giant Pilates ball as sacrifice; a sarcophagus of white light with a translucent plastic lid; a forest of mannequins hung from trees; a mountain shaped like a giant head half-submerged in a valley of mist; a giant face resting on pillars in the middle of a valley; a temple shaped like a spider with the legs as giant arches overhead.

The plot itself is slight and indifferently developed. There are far too many gods scheming, far too many magical artifacts and far too many occasions where people have miraculous powers granted to them. Like the first film, The Adventures of Hercules borrows the names of characters from Greek Myth – Clotho, Lachesis, Euryale, Aphrodite, Hera, Poseidon and Daedalus (who is misspelt as ‘Dedalos’ on the credits) – but completely changes their respective stories.

One thing this version does do is eliminate the bizarre attempts to mix Greek myth with science-fiction that the first Hercules did. This is something that makes The Adventures of Hercules marginally less terrible a film than Hercules was. This time Luigi Cozzi doesn’t attempt to depict the fabulist exploits of Hercules – throwing himself in a cart, tossing a bull into the heavens and so on – that failed so laughably in the first film. This now makes The Adventures of Hercules into more of a standard Italian peplum adventure. As a result, the film does not collapse into laughability with such persistent regard, which one supposes is at least something to be said in its favour.