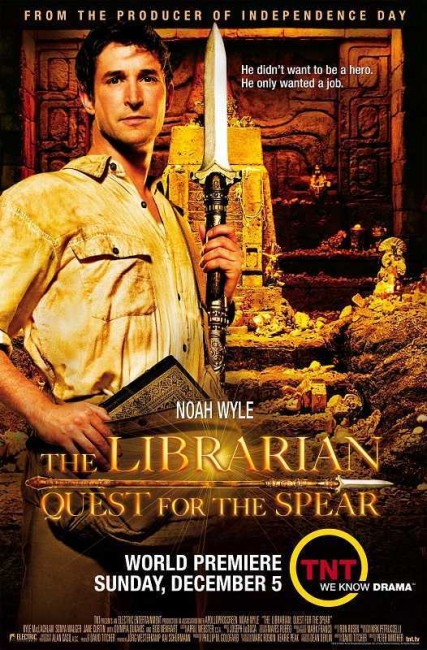 Flynn Carsen is well into his twenties and a perpetual university student. He is ordered by his professor to take some time off instead of sign up for a new semester. At a loss of what to do, Flynn receives an invite to a job interview at the Metropolitan Public Library. He arrives to find he is one of hundreds of applicants but impresses the interviewer Charlene with his knowledge of obscure trivia. He is appointed The Librarian by the library’s head Judson and shown the guarded inner sanctum where many magical and mythical artifacts of world legend are housed. That night, members of the Serpent Brotherhood break in and steal a segment of the Spear of Longinus, which is supposed to have pierced Christ’s side. Flynn is assigned to retrieve the other parts of the spear before the Brotherhood find them. Interpreting the clues in a book, which involves learning the language of the birds, Flynn heads to South America and then the lost city of Shangri-La in search of the other parts. He is joined on the mission by the tough Nicole Noone who has been sent by Judson to aid him. All the way they are hunted by the Serpent Brotherhood.

The Librarian: Quest for the Spear was the first in a series of tv movies that have proved surprisingly more popular than one might have thought. This was followed by two other tv movies The Librarian: Return to King Solomon’s Mines (2006) and The Librarian: The Curse of the Judas Chalice (2008) and then a tv series The Librarians (2014-8) that lasted for four seasons. Noah Wyle appears in all of these incarnations as the titular The Librarian, along with Bob Newhart as the library head Judson and Jane Curtin as its director, although the tv series focuses on a team of four headed by Rebecca Romijin – Noah Wyle appears in about half of the episodes, and Curtin and Newhart less than a handful.

The Librarian: Quest for the Spear has been clearly conceived as a knockoff of Raiders of the Lost Ark (1981) and the Indiana Jones films. There were a good number of low-budget Raiders copies produced during the early 1980s and even a few attempts to create an Indiana Jones-styled adventure tv series– see Bring ‘Em Back Alive (1982-3), Tales of the Gold Monkey (1982-3) and Relic Hunter (1999-2002). Surprisingly enough the theme of the elite group of tomb raiders hunting mythic artifacts became the basis of another (unsold) tv pilot a few years later with The Hunters (2013).

There is an amusing idea behind Quest for the Spear – that of a repository for the world’s mythic and magical artifacts. This is something that is hinted at by the final warehouse scene of Raiders of the Lost Ark. Of course, the script’s ready mingling of religion, myth and fictional works together into the same milieu does leave the show with a hodgepodge that makes the mind do a double-take when you think about the clashing ideologies. We have, for instance, appearances from the Ark of the Covenant from Judaeo-Christian mythology, while both the Spear of Longinus (which is supposed to have pierced Christ’s side) and Excalibur from the Arthur legends are rooted in Christian mythology. There is the Goose That Laid the Golden Egg, Pandora’s Box and the Golden Fleece from Greek mythology and the flying carpet from the Arabian Nights, as well as the Death Ray supposedly created by real-life inventor Nikola Tesla. Later we visit Shangri-La, which was a fictional location created in the James Hilton novel Lost Horizon (1933) and popularised in the film Lost Horizon (1937), and the time machine that H.G. Wells’ imagined in his novel The Time Machine (1895). This is a film that actively requires you to not think too deeply about how the various mythologies and fictional works might mingle.

I ended up liking Quest for the Spear far more than I felt I should have. It is a film that you cannot help but feel would have worked far better if it had been made on the kind of budget that the Indiana Jones films were. The lack of budget is particularly evident when it comes to the scene where Noah Wyle and Sonya Walger jump out of the plane – you feel this would have worked a whole lot better as a full-tilt fight sequence with the thugs that culminates in their jumping out rather than the cursory handling it is given. Faring somewhat better is the subsequent sequence with Noah Wyle and Sonya Walger traversing a rickety rope bridge, which actually engenders a degree of tension. The climax is dependent on a little too much on magic animated lights – not to mention the improbable image of 75 year-old Bob Newhart not very convincingly going into action and tossing around goons.

One of the better aspects of the series is the two leads. Noah Wyle is in his first leading role since appearing as a regular on tv’s ER (1994-2009). Wyle has a perpetually boyish presence that you cannot help but like and is well suited to the role. Opposite him is Sonya Walger who was clearly cast as an attempt to create a Lara Croft character for the series. Walger plays with a posh British accent that sounds incredibly fake (despite the fact she is actually British-born). She’s not so convincing – her playing has the frequent feel of someone much quieter in life being asked to step into the shoes of a larger-than-life character – but the writing of the character and her blithe one-liners add up to something highly entertaining. Walger also doesn’t do too badly in the fight scenes either. It is a shame that she was written out of the series following this movie as one would have liked the relationship to continue through the other films.

The series was developed by Roland Emmerich’s co-writer Dean Devlin and his Electric Entertainment production company. Devlin wrote Emmerich films such as Universal Soldier (1992), Stargate (1994), Independence Day (1996), Godzilla (1998) and The Patriot (2000), as well as produced the tv series The Visitor (1997). Devlin and Emmerich appeared to part ways after producing Eight Legged Freaks (2002), although did reteam a few years later for Independence Day: Resurgence (2016). Devlin has since turned up to produce the odd work such as Cellular (2004), the tv mini-series The Triangle (2005) and the tv series’ Leverage (2008-12) and The Outpost (2018– ), as well as direct Geostorm (2017) and Bad Samaritan (2018).

The teleplay is from David Titcher who has written a number of other adventure-related series with the likes of Around the World in 80 Days (2004) and the tv mini-series The Curse of King Tut’s Tomb (2006), as well as created the tv series Houdini and Doyle (2016) where the real-life figures engage in a series of adventures. Director Peter Winther acted as a producer on Emmerich and Devlin’s films from Stargate to Eight Legged Freaks. He subsequently went on to direct The Wicked (2013) and Painkillers (2015).