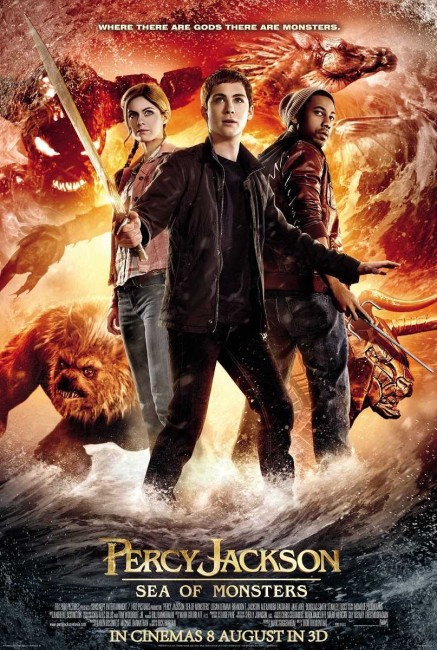 While at Camp Half Blood, Percy Jackson is startled to discover that he has a half-brother Tyson who is a cyclops. A mechanical bull then breaks through The Barrier that protects the camp from the outside world and goes on a rampage before being brought down. Afterwards they realise that The Barrier, which is created by a tree grown from the body of the dead Thalia, is dying. Annabeth works out that they could use the Golden Fleece to heal The Barrier. Percy hears a prophecy from The Oracle that he will be the one to find the Golden Fleece but that a great battle will ensue. Annabeth proposes a quest to find The Fleece but Mr D instead assigns it to Clarisse, the ambitious daughter of Hades. Percy, Annabeth and Grover set out on their own unauthorised quest, joined by an unwelcome Tyson. The journey takes them to the abandoned Circeland amusement park in the Bermuda Triangle where they must obtain the Fleece from the Cyclops Polyphemus. They realise they are up against Luke, the son of Hermes, who is seeking to use The Golden Fleece to resurrect Kronos, the most powerful and dangerous of the Titans.

Percy Jackson: Sea of Monsters is the second film based on Rick Riordan’s Percy Jackson novels. These consisted of a series of five Young Adult Films books (as well as several spinoffs) that conducted a Harry Potter-styled adventure using Greek myth transplanted into the modern day. I cannot say I much liked the first film version Percy Jackson & the Olympians: The Lightning Thief (2010). It suffered from wanting to be another Harry Potter to which extent it had imported Harry Potter director Chris Columbus who did his usual thing in turning in a film filled with visual effects scenes that had all the substance of eye candy, bland characters of zero depth and simplistic emotional cues that seemed to be there along with the orchestra to guide an audience towards points that were thunderingly obvious.

It is for these reasons that I had little enthusiasm for the sequel Percy Jackson: Sea of Monsters, which is adapted from Rick Riordan’s second book The Sea of Monsters (2006). Chris Columbus is absent from the director’s chair this time, although is present as an executive producer, while the film comes via his 1492 Pictures production company. The new director to take the chair is German-born Thor Freudenthal who had worked as a storyboard artist on the Stuart Little films and second-unit director on The Haunted Mansion (2003). Freudenthal’s prior oeuvre as director of Hotel for Dogs (2009) and Diary of a Wimpy Kid (2010) did nothing to excite one in the slightest.

The sad truth about both of the fantasy franchises started by Chris Columbus – the Harry Potter and Percy Jackson series’ – is that they markedly improve once Columbus hands the director’s chair over to a successor. Thor Freudenthal, while essentially working with the same elements as the first film, fashions them into a more polished effort. The direction is better – one felt they were dramatically inside the film and following the characters through the plot, whereas with Columbus the same thing felt like one was simply moving from one random encounter to the next. The special effects sequences feel less like they are just eye candy – with there being one well staged sequence with the climactic emergence of Kronos. The exception to this is the exceedingly silly sequence involving a cab ride with the three sisters with one eye (the Graeae according to Greek myth), which feels exactly like a silly piece of sub-par comedy taken from a late 1980s Tim Burton-inspired fantasy film like Second Sight (1989) or Ghost Dad (1990).

None of this better directorial polish disguises that Sea of Monsters is still eminently lightweight and forgettable – you reach the end of the film and fail to feel that you have travelled through an epic journey with the characters as you did with most of the Harry Potter sequels. There is the half-hearted attempt to stitch Sea of Monsters up as part of an ongoing saga to come with the story arriving at an open ending about Percy’s destiny and the rise of the Titans but this feels weak and grafted on, not something the story is building to naturally. Indeed, the question to be asked about the ending is whether with the film’s underwhelming $14 million domestic box-office gross, there is any likelihood of seeing any further chapters of the saga.

The other noticeable thing about Percy Jackson: Sea of Monsters is that the film has scaled back on some of the big-name casting – the likes of Pierce Brosnan, Uma Thurman and Sean Bean are replaced with the less high-profile Anthony Stewart Head and Stanley Tucci. The one appearing to be having the most fun is the fan favourite of Nathan Fillion as Hermes where he even gets Easter Egg jokes about a Hercules tv series “naturally, being the best television series ever, they cancelled it after the first season,” alluding to Fillion’s starring show and fanatical cult favourite Firefly (2002-3). Logan Lerman is back, although takes a backseat role for much of the film, while, as per last time, Alexandra Daddario gets to do very little, in fact ends up being out-acted by the much more lively new female cast member Leven Ramblin.