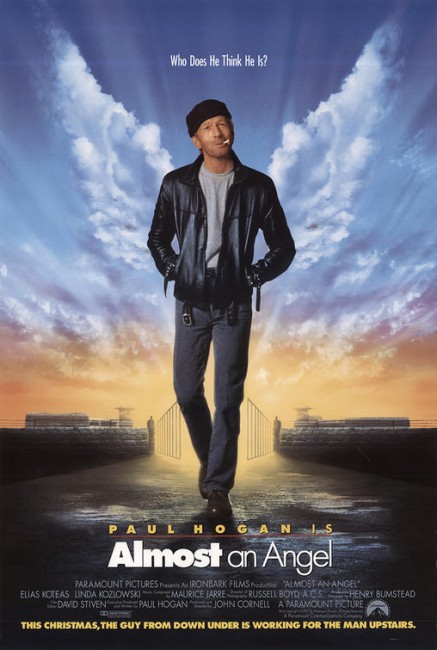 Middle-aged lock breaker Terry Dean is released from jail and is about to set about a new bank-robbing career when he is run down while trying to save a child from the path of a truck. Lying in hospital, he receives a vision of God who tells him he has been given a chance to reform. During a further bank robbery, Terry is shot at by rival robbers who are using blanks in their guns. Terry however thinks he is unaffected because he is an angel. And so he sets about in his own crude and unrefined way to help a crippled man and his sister who run a youth centre.

Paul Hogan became a superstar, playing the quintessential Australian man’s man in Crocodile Dundee (1986) and its sequel Crocodile Dundee II (1988). As with other stars who etch out such distinctive roles, Hogan found himself typecast in the part and has almost entirely failed to do anything else since – apart from such lame fare as Lightning Jack (1994), Flipper (1996), a return to the familiar with Crocodile Dundee in Los Angeles (2001) and this, where Hogan’s flinty bush persona was reduced almost to a parody of itself.

In the interim following the Crocodile Dundee films, Hogan appears to have to become a Christian and the script Hogan writes for himself here latches onto his newfound religiosity with a peculiar earnestness. The result is a real lurching oddity. The film meanders along – some of the broad humour is even likeable in a dumb, predictable way.

Of the audience this is pitched to and those who are likely to take this fare seriously, eyebrows are no doubt inclined be raised at the film’s claim that cheap, tatty fake miracles are at least better than no miracles at all. More interesting are the film’s visions of Heaven and the afterlife, which seem to unconsciously come from a cinematic lineage – it is Michael Landon on Highway to Heaven (1984-9) that beckons the way to the afterlife and the film gets one good joke in by casting God with no less than Charlton Heston.

The film is at least a welcome relief in toning down Hogan’s hatchet-blade accent and the steely-macho cocksureness of the Crocodile Dundee films. However, Almost an Angel is such a bizarre turnaround for those who came expecting to see Hogan’s Dundee persona that it found no audience at all.