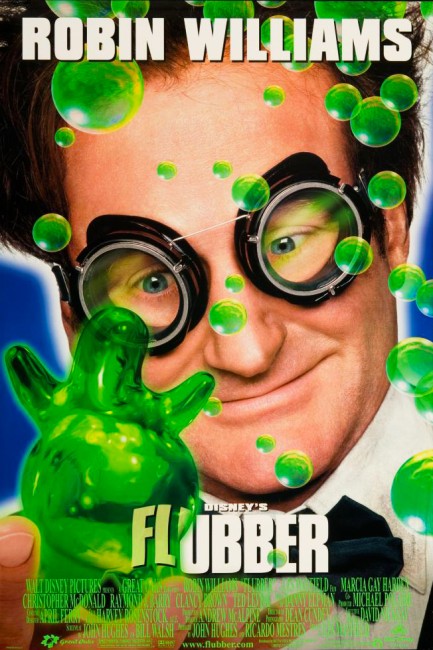 Chemistry professor Philip Brainard is so absent-minded he even forgets to turn up for his own wedding. Following this, his fiancee, the college president Sara Jean Reynolds, decides to abandon him. By accident, Brainard then creates a rubber that can defy gravity and is also highly imitative of human behaviour. Armed with flubber, as he names it, he attempts to win Sara back while also saving the college from financial disaster.

Disney’s The Absent-Minded Professor (1961) was the most delightful of the series of live-action comedies that the studio would produce over the next two decades. It has a wonderfully droll lunacy to it – of flying Model T’s and maniacally bouncing baseball teams and Fred MacMurray as the title character keeping a perfect deadpan face at the centre of everything. It inspired a horde of similar mad scientist caper films from Disney – including the likes of the Merlin Jones and Dexter Reilly films. Indeed, one could make the case for The Absent-Minded Professor having single-handedly transformed the public image of the scientist from a defiler of things mankind was not meant to know throughout the 1930s and 40s into a likeably absent-minded eccentric.

Flubber touches base with most points of the original’s plot – the professor so absent-minded he forgets his own wedding, the flying car, the flying basketball team, the ruthless villain and his son, the professor’s battle to win his fiancee back. Sadly, the producers befall the misapprehension that to better the original simply involves re-conducting it bigger and with more than before. The effects are highly polished but the charm of the original has been supplanted by an excess of cuteness.

Now flubber is not just an anti-gravity rubber but is also sentient and highly imitative and even conducts its own song-and-dance numbers. The professor is now given the assistance of a cute robot who has a crush on him and expresses her emotions by playing clips from videos (which conveniently allows the film to shuffle through the Disney back catalogue). The villain is outfitted with two bumbling sidekicks that are the butt of a series of violent slapstick pratfalls – Flubber is produced and written by John Hughes who is also responsible for the Home Alone films and the remake of 101 Dalmatians, which all feature low-intellect goons as the butts of protracted slapstick sadism. The net effect of all this is to so overload the original with gags as to completely bury the charm it had first time out.

Flubber was directed by Les Mayfield who had previously made Encino Man/California Man (1992), the remake of Miracle on 34th Street (1994) and other forgettable films such as Blue Streak (1999), American Outlaws (2001) and Code Name: The Cleaner (2007). Mayfield also heads Zaloom-Mayfield or ZM Productions and has also produced a series of remakes of other Disney live-action films for tv with The Shaggy Dog (1994), The Barefoot Executive (1995), The Computer Wore Tennis Shoes (1995), Escape to Witch Mountain (1995), Freaky Friday (1995) and The Love Bug (1997).