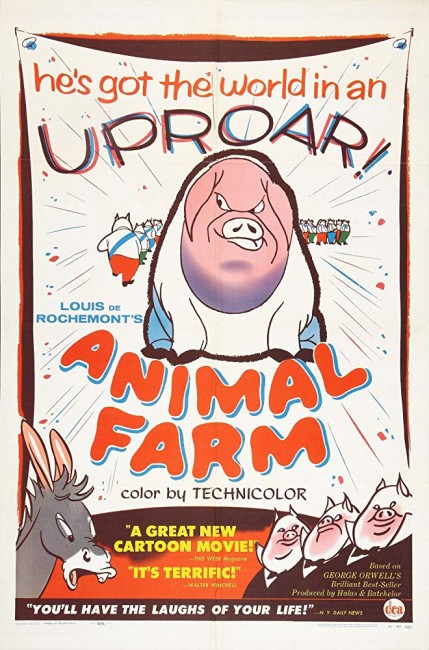 Manor Farm has fallen on bad times and Farmer Jones has become a mean-tempered drunk who abuses the animals. The aging pig Old Major calls a meeting where he inspires the animals to stand up for themselves rather than let the fruits of their labour be taken by Jones. The animals stage a rebellion and drive Jones out. They then establish a new, free egalitarian society and inscribe its laws on the side of the barn – including among their laws that ‘Four Legs are Good, Two Legs Are Bad’, that ‘No Animal Shall Sleep in a Bed’, that ‘No Animal Shall Kill Another’, that ‘No Animal Shall Drink Alcohol’ and that ‘All Animals are Equal’. Soon after the revolution however, the scheming pig Napoleon takes control of the society, oppressing the other animals and slowly altering the rules on the barn in order to justify his own rule.

Animal Farm had the distinction of being the first feature-length animated film made in Britain. It was based on a 1945 book written by George Orwell, author of Nineteen Eighty-Four (1949). Orwell wrote Animal Farm not as a children’s tale but as a trenchant satire borrowing the guise of a fable. Orwell was a lifelong socialist. Animal Farm was a thinly veiled allegory that expressed the deep embitterment that Orwell felt at the way that Communist Russia had betrayed the ideals of the socialist revolution that Orwell had fought for during the Spanish Civil War. Many of the characters in the story are direct counterparts of historic figures in the Russian Revolution – for Old Major read Karl Marx; for Napoleon read Josef Stalin; for Snowball read Lenin and Trotsky.

However, the film version bluntens Orwell’s fable. The film’s mistake was its timing. In 1954, the only prototype for the animated film was Disney – the idea of an animated film for adults was not an idea that would occur until the 1970s. Thus John Halas and Joy Batchelor are stuck with trying to pitch George Orwell’s dark and bitter allegory as a kiddie film.

As a result, Animal Farm is uneasily caught between the two poles. Halas and Batchelor try for a light, Disney-esque approach – there is a cute little duckling and comic frolics and the score is a light one that tries awkwardly to tell the story with musical sound effects – but that is not the type of story that Orwell wrote. Animal Farm succeeds best during the middle where the satiric potential of the fable comes into its own and the story by itself is sufficient to carry the film past the juvenile approach.

The most jarring of the changes is the ending, which totally reverses Orwell’s biting and deeply pessimistic conclusion. In the book, the animals conduct a second revolution that overthrows Napoleon and the pigs, but even then it can be seen that the entire cycle is going to repeat itself over again. The film changes the ending to a more upbeat positive one, showing the second revolution as a success. George Orwell, who died in 1950, would have no doubt been as equally hurt about such an idealistic betrayal here too.

Animal Farm was later remade, following the success of hit Babe (1995), as the live-action Animal Farm (1999), but that was equally disappointing, in fact making much more drastic changes to the book than this film did. In the 2010s, Andy Serkis has announced that he intends to make a live-action version using motion-capture animation.

Revelations in later have shown that the film came with the backing of the CIA’s Psychological Warfare Workshop with the intention of making it as anti-Communist propaganda. They purchased the rights to the book from the Orwell estate (after arranging a meeting between Orwell’s widow and Clark Gable) whereupon the production of the film was signed out to Halas and Batchelor. There is a fascinating article on the topic to be found here The Cartoon That Came in From the Cold.