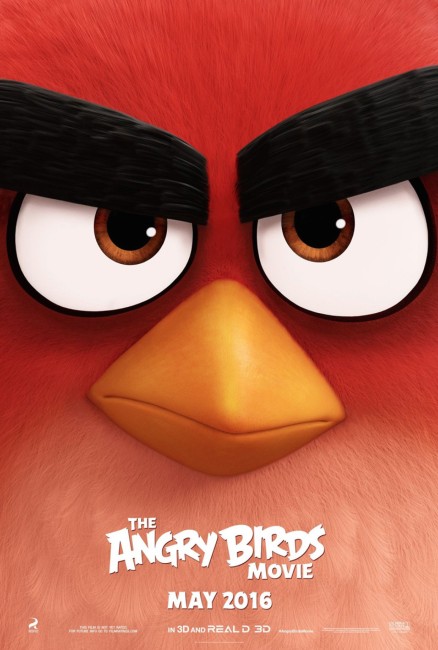 aka The Angry Birds Movie

Among the birds that live on Bird Island, Red is regarded as a misfit and friendless because he is unable to control his temper. His job as a birthday clown goes awry and he accidentally cracks open the egg that a family are waiting to hatch. He is taken to court by the family where he ends up losing it in front of the judge and is sentenced to an anger management class. There he befriends two other attendees Chuck, who moves at very high speed, and Bomb, who has the ability to detonate whenever he loses control. A ship arrives at the island to the amazement of the other birds. The birds welcome the crew of pigs led by Leonard. However, after their ship crashed into his house, Red is suspicious of the pigs’ motives and he finds there are dozens of them hidden aboard the ship. The pigs soon overrun Bird Island but the other birds ignore Red’s warnings because the pigs bring gifts and novelties. The birds then wake up the next morning to find the pigs have departed and stolen all their eggs. The only recourse seems to be for Red to lead an expedition to Pig Island and get them back.

Angry Birds is a videogame created by the Finnish company Rovio. Initially designed for the iPhone, Angry Birds appeared in 2009 – some twelve million copies were purchased within the first year and the game was expanded to other mobile platforms. Game play is fairly simple – one is required to catapult a series of birds through the air and eliminate or strike the support structures being inhabited by pigs that have stolen the birds’ eggs. One could principally fire the familiar red bird (who has been given limbs for the film version) and on more advanced levels could employ the other types of birds, which are introduced as supporting characters in the film. There have been a number of different versions and spinoffs released. An animated tv series Angry Birds (2014– ) was also made by Rovio and followed by Piggy Tales (2015– ), which tells the adventures of the pigs.

A feature film based on a mobile app must count as a world first. (Mind you, we live in an era when even an internet meme like Grumpy Cat can get its own film). As such, the film has to work with the rather limited premise of the game – ie there is no more to it than catapulting birds across the landscape to eliminate egg-stealing pigs. To its credit, the film fleshes out the premise and gives the characters identities and stories. The pigs are given motivation (such as it is). Of course, Red is no longer quite the angry bird he appears in the game – less like a cartoon figure with steam coming out of his ears than the cliche standard of the cuddly misanthrope who sneers “bah humbug” to all those around him but gradually thaws and earns the acceptance of the community by the end of the film.

I didn’t particular hate Angry Birds (or The Angry Birds Movie according to the end credits and promotion); it feels like the equivalent of switching your brain off and spending an hour-and-a-half watching cartoons for the single digit age group. (At which you cannot help but think that The Angry Birds Movie seems to be aiming for the wrong demographic – in that the majority of cellphone users are adults, surely its’ pitch as a film for children seems to be going out to the largest non-cellphone using demographic there is). There are all the usual pieces of 3D eye candy slapstick; all the usual pop culture gags and references – even an odd one referencing The Shining (1980), which again surely seems evidence of a mixed-up aiming for demographics – but nothing beyond the instantly forgettable.

One plus is the voice casting. Jason Sudeikis makes the misanthropic Red a reasonably engaging and longsuffering as opposed to unlikeable character. The others all work well, while Peter Dinklage stands out with basso gravitas as The Mighty Eagle. The most bizarre of these is Hollywood A-lister Sean Penn who voices the role of the large and taciturn Terence – a role that actually has no dialogue, just hummings and grunts.